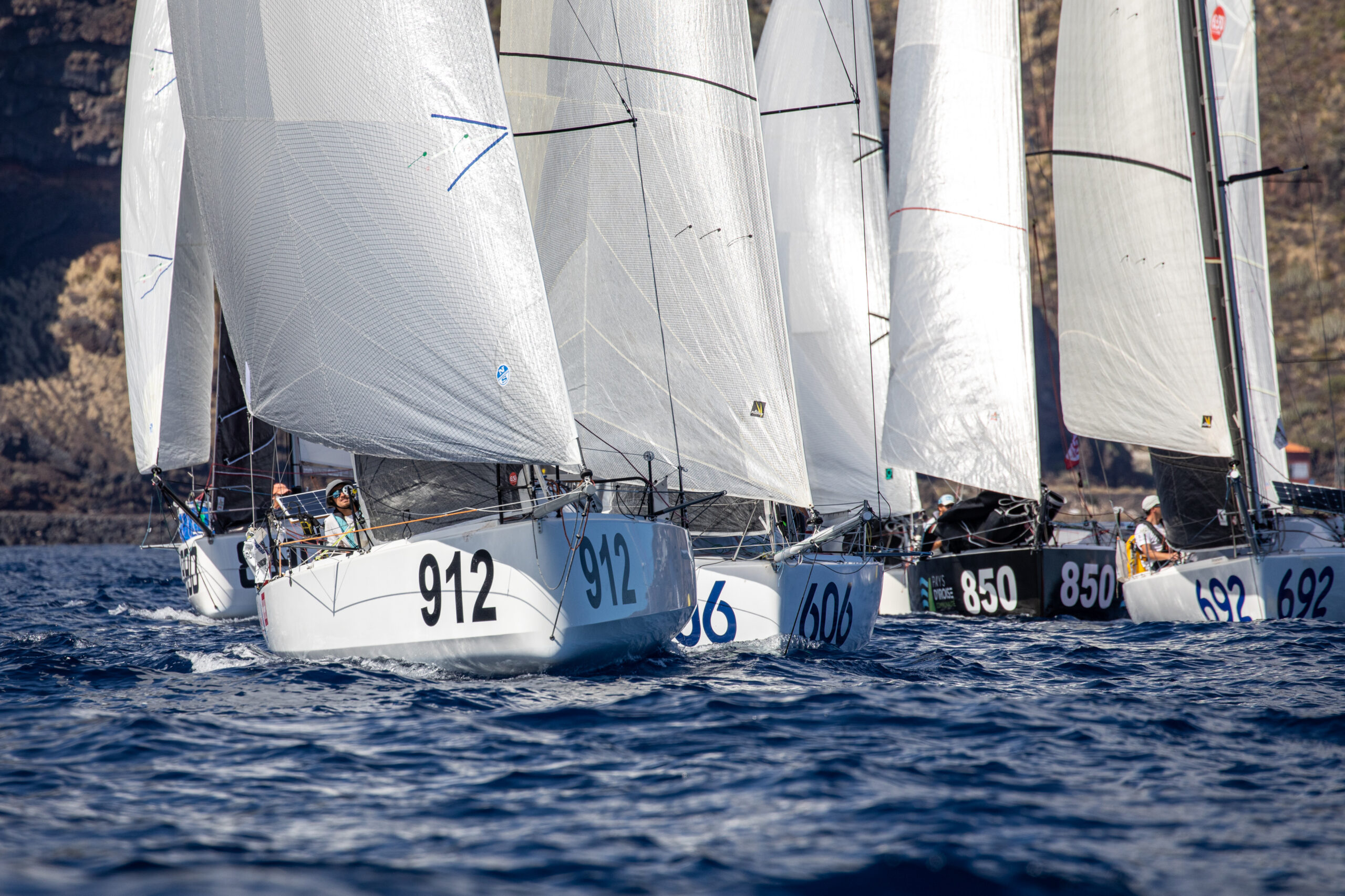 Bunched up in the light air start - Vincent Olivaud pic

As planned, the second leg of the 23rd Mini Transat EuroChef kicked off this Friday at 14:00 UTC, and propelled along by a light north-easterly breeze, the remaining 86 participants left Santa Cruz de La Palma bound for Saint-François with a hefty 2,700-mile sprint ahead of them as well as a great many unknowns.

Unknowns associated with the exercise itself which, for the vast majority of sailors, will be their transatlantic debut, but also unknowns linked to the weather. Indeed, in addition to the wind shadows created by the Canary Islands, the solo sailors will also have to deal with some lacklustre trade wind and the great many uncertainties caused by this scenario.

For the next 24-36 hours, the solo sailors will have to be patient and opportunistic in their bid to escape the Canaries archipelago. The challenge? To elude the wind shadows created by the islands as best they can, especially that generated by the island of Tenerife which culminates at an altitude of 3,715 metres.

“The effects of the Teide may be felt across more than 60 miles. As a result, the Mini sailors will have to try to find the best passage between La Gomera and El Hierro, which they have to leave to starboard,” Christian Dumard, weather consultant for the race, explained.

It won’t be that easy, especially as they’ll have to deal with numerous light patches and some poorly established trade wind”, he said.

Within this slightly tricky context, there are likely to be a few surprises in store, with some significant gaps possible further down the track.

“We’ll need to be on top of our game. Tonight is likely to be very important,” said Tanguy Bouroullec (969 – Tollec MP/Pogo), current leader in the prototype ranking with a lead of less than 1 hour 10 minutes on Fabio Muzzolini (945 – Tartine sans Beurre) and Pierre Le Roy (1019 – TeamWork).

He also has a cushion of less than 10 hours over Russian sailor Irina Gracheva (800 – Path), who might well be able to pull a blinder in the opening miles of the course.

“Conditions are perfect for me and above all they’re perfect for my boat. I know I have a card up my sleeve in light airs. I haven’t lost sight of the fact that when it’s very light and very fluky, everyone’s at risk of getting trapped or making a big mistake, though.

“It’s game on for me, in any case”, explained the skipper, who has already shown on countless occasions that she’s absolutely formidable in light conditions.”

“The game promises to be pretty open from the get-go. We’re going to have to look lively and be opportunistic, because you can quickly pay a heavy price for just one mistake and, equally, a good option can quickly enable you to make big gains”, confirmed Léo Debiesse (966 – Les Alphas), who is also particularly at ease in the light.

“It will inevitably be a bonus to escape the archipelago in the leading group, but after that there’s still a long way to go. Even if someone manages to stand out in the coming hours, it’s not game over for the others. I think mental strength will be invaluable. You’ll need to post a solid performance right the way to the finish”, assures the sailor.

Getting off to the best start this afternoon, rival Anne-Claire Le Berre (1005 – Rendez-Vous Equilibre) has a similar mindset: “Initially, it’s fair to say that exiting the Canary Islands is likely to be a bit complicated, but beyond that, however things play out tonight, the game will be wide open behind,” she said.

“To my mind, the key point will be in five-six days’ time once we can see how things are shaping up for the second part of the race. Today, things are fairly uncertain given that the trade wind is not established at all, but at a given point, a decision will have to be made about which course to take”, explained the racer.

In fact, in a few days, after plunging southwards for a while, the Mini sailors will have no other option than to hang a right to make for the Antilles Arc. At that stage, they’ll have to find the best possible compromise between making fast headway and sailing the least distance possible.

“We’ll have to deal with the situation according to the weather reports we receive every day via SSB. One thing for sure: there will be a range of options. The name of the game here will be to not only make the right strategic choices, but also to manage to make fast headway for a long period,” added Tanguy Bouroullec.

Though he’ll be able to rely on the experience he’s gained from his first two participations in the race, the same will not be true for the vast majority of the fleet, which is preparing to make its transatlantic debut, not without its share of apprehension.

“Like a lot of sailors, I don’t know what to expect as I don’t know where I’m going. Indeed, the unknown is exactly what we’ve all come in search of in some way. It’s a challenge in itself,” Anne-Claire Le Berre said, echoing the sentiment of nearly all her rivals.

“Making it to the other side and having done it will be a wonderful thing. Today, it is that sentiment that far outweighs the sporting aspect. After working on this project for a year and a half, this project boils down to and is shaped by this moment right here.”

Lina Rixgens (982 – Avanade) has officially reported her retirement to Race Management. The German sailor noticed a problem with her keel-bulb joint and after trying to resolve it without success, has now thrown in the towel. It’s bitterly disappointing for the sailor who was already thwarted by issues with her rudder fittings during the first leg.

Tanguy Aulanier (986 – La Chaîne de l’Espoir) collided with Camille Bertel (900 – Cap Ingelec) during the start phase, damaging the bow of his Ofcet 6.50. The skipper has quickly had his boat hauled out to assess the extent of the damage and decide how best to proceed.

Pilar Pasanau (240 – Gemese – Peter Punk) turned back shortly after the start of the second leg having detected some autopilot issues. The Spaniard is trying to come up with a solution before heading back out to sea.