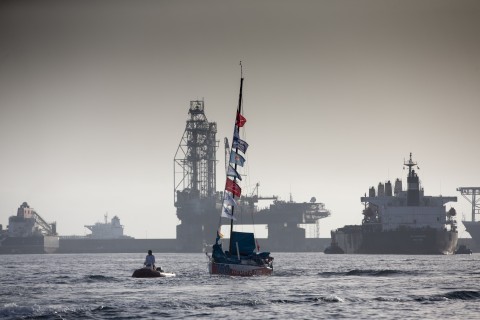 They took their time, but the trade winds now seem to have kicked back in. As a result, the group of around thirty or so racers, becalmed to the north of the latitude of Madeira, has got some wind in its sails again for the final straight to the Canaries. For these sailors, the race has been transformed into their very own adventure.

There may well be a few illusions shattered within the second group making its way towards the Canaries, some of whom will be competitors who had high hopes in terms of the leader board. They’ll have to switch their game plan now. Racking up a deficit of over twenty-four hours in relation to the head of the fleet translates as no hope in the overall ranking, though there is always the second leg still to cover of course.

Fortunately, competing in the Mini-Transat doesn’t simply come down to the boat’s position on the scoreboard. It’s a much more personal journey, experienced in an entirely different manner from one skipper to the next, according to their temperaments.

Sometimes, competing in the Mini-Transat is also about accepting that you are going to lose contact with your rivals who, very often, are men and women you have got to know and like over the course of the previous two seasons on the Mini circuit.

It’s also about trying to overcome the doubts that inhabit the solo sailor, who only have a limited amount of information about the weather, their position and that of the others, and the weather forecasts. Some thrive in such situations, discovering another side to their personality that is sometimes very different to their life on shore. Others find a way around the situation, running through possible scenarios throughout the day that might fuel the race, immersing themselves in books that they’ll never get to the end of and establishing routines that will enable them to pass the time.

At the tail end of the fleet, the stimulus of competition has an altogether different density. You don’t battle in the same way for a place on the podium or a fortieth place. As such, it is no coincidence that within the chasing pack, the groups are made up according to the vagaries of the breeze and according to affinities sometimes too.

Within these small maritime communities, there’s a lot of chatting over VHF, alerting one another when you’re going to sleep and where the boat is heading under autopilot, even warning of key moments such as when you’re going to put in a tack. Less pressure, more well-being, such is the rule.

The propaganda that rages among the leaders is substituted here by a kind of gentleman’s agreement where you avoid going it alone, to the detriment of performance at times. The slight delays amassed also cause a slight fracturing of the fleet, which can create gaping chasms, as is the case during this first leg.

The first train of skippers has been in the station for a good while already, but the second, slower one has its own unique charm. Right at the back of the fleet, Fred Guérin (Les-amis.fun), who has now left La Coruña but is no longer officially racing having exceeded the 72-hour deadline for his pit-stop, is having an altogether different kind of experience: ultra-marine solitude.