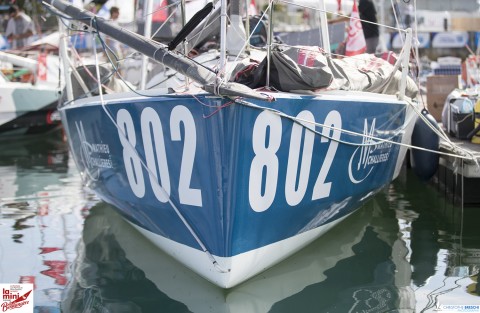 It’s part of the Mini-Transat’s DNA that it has always been at the cutting edge of naval architecture. From the prototypes sailed by Casimir Jarkowski in 1997 and Norton Smith in 1979, to the latest works that include Lilienthal skippered by Jörg Riechers or the daring Arkema 3 helmed by Quentin Vlamynck.

From the first editions of the Mini-Transat we have a tendency to recall the souped-up production boats (Muscadet, Gros-Plant, Serpentaire, Surprise Coupés) rather than the odd prototypes, even though they have all contributed in some way to the history of the race and its evolution. From 1977, the Polish sailor Casimir Jarkowski set sail on a very special Caroff design. What set it apart was the fact that, devoid of a mainsail, it had two large genoas hanked onto two separate stays. This boat, designed solely for downwind conditions, made the most of the rule in this first edition, which wanted the course between Penzance and the Canary Islands to simply be a delivery trip and hence not count towards the event ranking.

“In my view, the first prototype to really be designed specifically for the Mini-Transat was American Express, winner of the 1979 edition in the hands of one Norton Smith. She was a really versatile boat, which was both seaworthy and quick.” Etienne Bertrand, the naval architect responsible for a number of prototypes, including Lilienthal, Jörg Riechers’ brand new steed, is particularly well placed to detail the pivotal stages in the Minis’ architecture.

Through until 1987, the hulls evolved very little. We made slight gains in terms of power and ergonomics, but the philosophy that prevails in hull design is identical.

In 1987, two new prototypes designed by the Finot group put in an appearance. Thom Pousse helmed by Philippe Vicariot and Mistral Gagnant skippered by Hervé Devic carved out a radically different wake to the rest of the fleet. The hull below the waterline was more powerful, the freeboard was dramatically lower and the whole thing was considerably lighter. “The reduction in the freeboard wasn’t an end in itself. Above all we wanted to work on the power of form and make her lighter through highly detailed work on the scantlings. We benefited from the collaboration of Thierry Fagnent, who did an expert job with his yard…” Pascal Conq recalls. This winning combination heralded the start of an era that was virtually dominated by Finot-Conq designs. From 1989 to 2013, the Finot designs took the winner’s cup six times. In essence though, it was the resulting philosophy that became the rule. The Finot Conq office can also boast victory with the same boat, Eva Luna, in the hands of Thomas Ruyant in 2009 and then Benoît Marie in 2013. In 2015, Eva Luna made the podium again. Only Karen Liquid, the Magnen design skippered by her architect, has equalled this performance, pulling off the double in 1997 and 1999.

“Michel Desjoyeaux had a real talent. That of grouping together a mass of technical solutions, like the canting keel, the adjustable bowsprit and the circular boom vang track and turning it into a consistent whole. Today, nobody would consider sailing with a symmetrical spinnaker and a pole attached to the mast…” Etienne Bertrand’s analysis has a ring of truth to it. When Michel Desjoyeaux set sail from Douarnenez in the Mini-Transat in 1991, all eyes were on his prototype, an old Fauroux design, which had been subject to close scrutiny and creativity on the part of Desjoyeaux’ brothers, Bertrand and Hubert, his intellectual guides from the CDK yard. At the finish in Fort-de-France, the Mini sailors crowded around to have a tour of the winning boat in the second leg, spurred on more than ever by the ‘Professor’ himself, whose nickname couldn’t have been more richly deserved.

1985 and the production boats change status

Philippe Harlé, the iconic architect responsible for the Muscadet, competed in the Mini-Transat on a Gros-Plant, a powered-up Muscadet geared towards offshore racing. However, from one edition to the next, it became increasingly evident that the gap was widening between the production boats and the prototypes. As a result, in 1985, with the help of the watersports centre in Les Glénans, he decided to launch a new production boat specially designed for the Mini-Transat. Les Glénans even planned to use it to establish a promotional formula, which would enable a double-handed crew to be at the start. The Coco was born.

Next up, from 1997, came the dynasty of Pogo 1s, then Pogo 2s, which would reign supreme through until 2013. Today, the Pogo 3 and Ofcet have learned many lessons from the revolution introduced by David Raison. Victory should be within their grasp.

2011 and the scow bows are on the warpath

In 2009, David Raison, racer and naval architect, decided to put his intuition to good use. Little by little, the hulls become more powerful, but more improvements, more radical options are required. It is at this point that David Raison takes inspiration from the hulls of the scow bows, the flat-bottomed boats from Chesapeake Bay, which feature unrivalled power and stability thanks to their round bow. It takes David Raison nearly two years to optimise his boat and essentially erase the initial teething problems associated with such things as the increased wetted surface area in light airs. However, in 2011, his Magnum utterly dominates the race, paving the way forward for a new generation of boat. At the start of this Mini-Transat La Boulangère 2017, Ian Lipinski, who is sailing the Griffon.fr, the next iteration of Raison’s design, will have two other scow bows to contend with among others: Arkema 3 skippered by Quentin Vlamynck and Lilienthal sailed by Jörg Riechers. From 2018, another adversary is looming, designed by the Finot-Conq design office. “You never really leave the Mini-Transat”, concludes Pascal Conq.