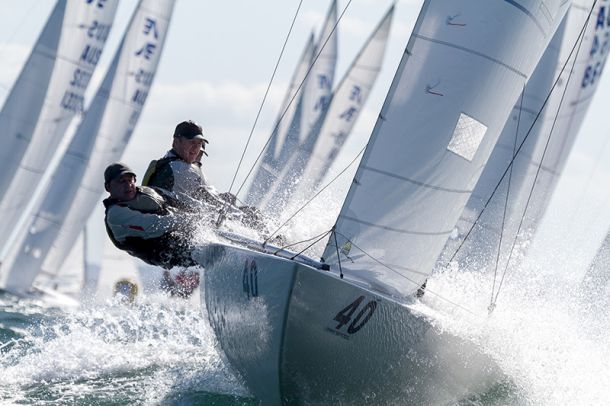 Racing in the Marinepool 19th Etchells Australasian Championship, conducted by Mooloolaba Yacht Club, stepped up a notch today as the breeze filled and hungry teams came out to try to reclaim their position as title contenders.

After two races in strong wind and plenty of shifts, Cameron Miles and his crew of Grant Cowle and James Mayo did only just enough to wrest the overall lead from Sydney’s Jeanne-Claude Strong.  Miles finished a poor in 18th in Race 1, but as the breeze started to build and swing east, he found his groove and battled a tight second race to finish in second place.

There was no one play-of-the-day today. Both races contained brilliant racing in the top of the fleet.

In Race 1, Miles decided to take a chance with a port tack on the start. “Then we thought we should probably get going the other way, but we couldn’t tack after that. We got forced out to the left which we didn’t really want to be going. We got held out by a couple of boats and it was the real wrong way to go. It was our own fault for being there,” Miles said.

However, for the defending Australasian champion Matthew Chew, it was another matter. He and his team returned to form today. Yesterday they walked away with 21/8/44U ensuring they were out of the running for a third championship title. Chew said the team went home, regrouped and decided that they were still here to race. “We decided not to give up,” Chew said. So they went into today as though they could still win the regatta.

Chew led around the top mark the first time, but by the bottom mark, fellow Brisbane Fleet member John Warlow was with Chew. The rest of the race was tack for tack and gybe for gybe with Chew just squeezing ahead of Warlow.

“He was trying to roll us, but we just stayed ahead. It was really good fun,” a chuffed Chew said.

“For us to be on Chewie’s behind at the finish of one of those races, we are very happy with that,” Warlow said.

In third across the line was Michael Coxon. Hong Kong’s Mark Thornburrow was fourth and Strong in fifth.  Miles finished 18th.

Race 2 saw the 18 to 24 knot gusts shake-up a few of the fleet as they approached the finish line. By the second general recall the Black Flag was up and the fleet was on notice that PRO Ross Wilson wasn’t going take any prisoners. He needed to get the final race in before the pressure became too much for a safe race.

Strong was caught up in a melee at the Start Boat end of the line. Miles and Chew chose the mid-line. At the top mark Miles was in the lead with Chew right with him. “There was plenty of pressure in the right, but then it went to the left. We were on the lay-line for about half-an-hour. But then there was the shift, right at the end. The others were far enough out in front to get in front of us.

“We went around with Chewie and then we did one gybe inside of him and took a 100 metres out of him. I thought we had a race winning lead at the bottom. On the last run, it was the wrong thing to do. We missed out on the pressure coming down from the left. We stuffed it up totally,” Miles said.

Miles then broke a traveller sheet which forced them out to the left which made them loose touch with the first two boats. “We got to the top mark in a bit of a fluster,” Miles added.

Strong, who had taken the right-hand side, was nowhere to be seen. Fast astern of Miles was Thornburrow. Gradually Chew chipped away at Miles’ lead while Thornburrow, with Australian Olympic Gold Medallist Malcom Page as his tactician, took the lead.  Miles’ last gasp effort at first place finish was not enough as Thornburrow pushed, Miles followed and Chew responded to finish 1/2/3 with only a matter of a few seconds between the three boats.

“We almost won the second one as well. It was really close racing with Cameron (Miles) and Mark Thornburrow. It was really good fun and we were smiling even though we lost it at the end. It was so close; all of us within five seconds pretty much. Every mark had a different leader,” Chew said.

Peter Merrington finished fourth in that race and Michael Coxon fifth. Warlow finished in ninth. That result sees a surprised Warlow in third place overall. “Very happy with that. We know we are going well in the light, but we haven’t had a chance to test ourselves in pressure in a regatta so yes, I am very surprised. But we have put a lot of work in, training and with the North Sails guys. And we have got our head around the rig. I am very, very pleased with the way the boat is going in pressure,” Warlow said.

In fourth overall is Coxon on 25 points and in fifth is Peter McNeill on 26 points.

Thornburrow returned to the dock with a quiet smile on his face. Yesterday had been a hard day for the 2013 Australasian Championship winner. He had to send crew Simon Cooke up the mast. “We had a broken jib halyard so we lost the last two races badly because of that. Today was good; more wind suits us,” Thornburrow said.  His team now sits on sixth overall.

The third and final day of the regatta is tomorrow with the first of two races scheduled to start at about 10am.  The forecast is for a 20 knot south-easterly, easing during the afternoon.