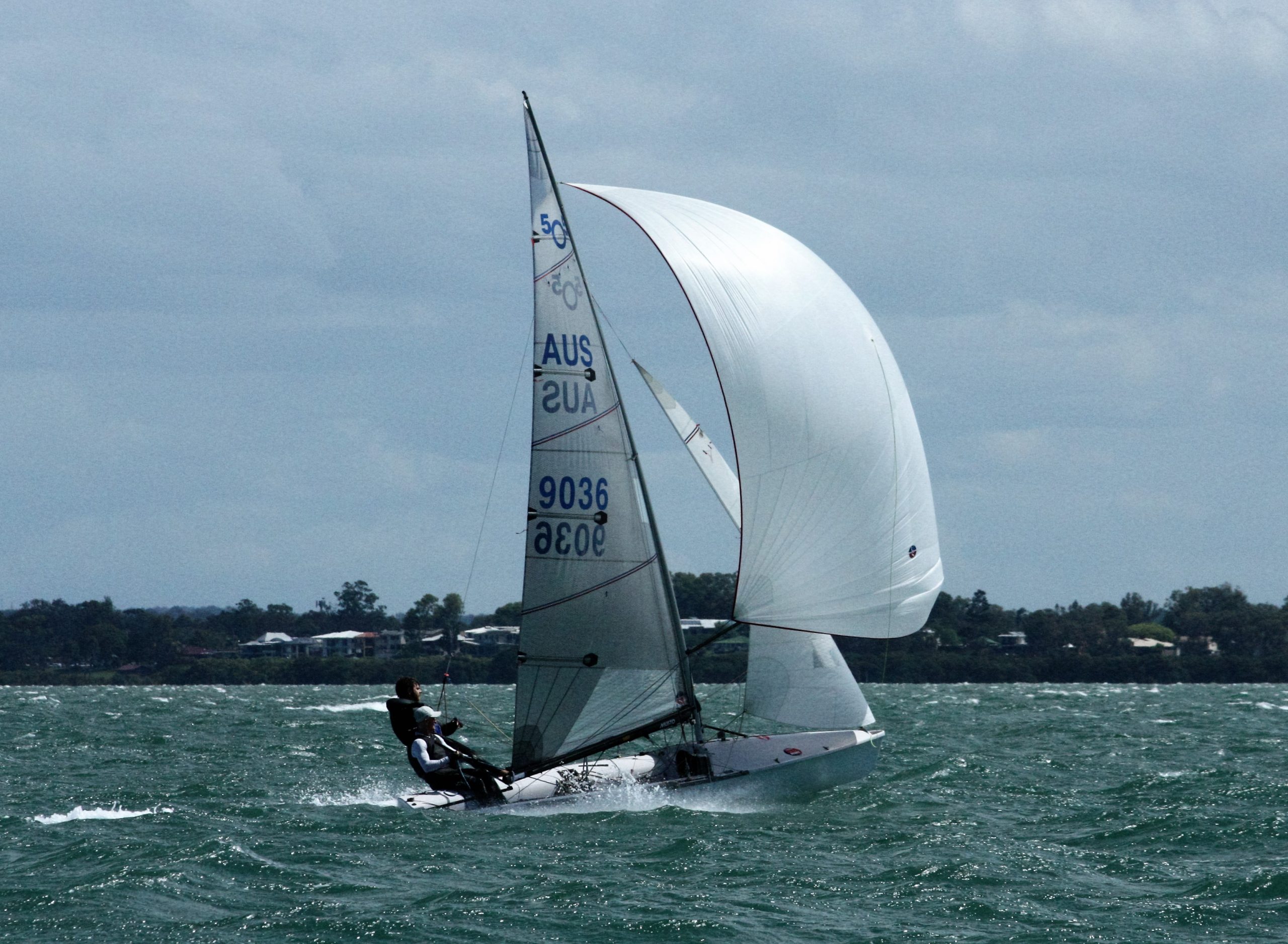 With Luke Payne as crew, Mike Quirk won his 5th Australian Championship in convincing style without having to race the last two races in the nine race series.
Using the World Championship scoring format, the “Quirk / Payne” team had a score of only 10 points after 7 races.

In 2nd place was the current double World Champion Mike Holt with Rob Woelfel.  (Mike & Rob won the 2014 World Series held in Kiel and Mike won his 2nd World Title last March in the 2015 Worlds in Port Elizabeth, South Africa with Carl Smit.)
With a race record of 16 points they finished only 1 point in front of 5 times Australian Champion, Sandy Higgins & Paul Marsh who secured 3rd place with a score of 17 points.

The consistent performance of the Holt / Woelfel team is amazing considering the frustration associated in racing at this level in a borrowed boat which was not “race ready” when they arrived. They worked on it continuously to get “on pace”. (The locals are “very pleased” the World Champion team did not race their own boat – that may have provided a different result !)

Highlight of the series was the appearance of 22 year old Josh Franklin, a local Brisbane sailor, new to the 5O5 Class and sailing his first 5O5 Championship with Darren Gilbert as crew. The Franklin / Gilbert team finished 5th with a very consistent performance and result of 30 points.

The 30 boat fleet had three female helms in Amy Lee, Christina Bowden and Sarah Macarthur-King, with Amy in 16th position, winning the perpetual trophy for the top female helm.

Christina Bowden, a 14 year old Sabot sailor from Brisbane, racing in her first 5O5 event, finished 18th overall. With the help of experienced crew, Ian Gregg, she left many an experienced 5O5 sailor in her wake. Watch this space for this talented young lady !

Sailing off Waterloo Bay the nine race series was held over five days with a single race on the final day. Conditions for the first three days were excellent for the series with the sou-east to nor-east breezes of light to moderate strength (mostly moderate) providing ideal conditions for 5O5 racing. The final two days saw a more northerly influence in the wind direction with the shifting conditions making it essential to watch the compass to capitalise on the oscillations.

The host Club, Darling Point Sailing Squadron, provided perfect Race Management for the competitors and were great hosts off the water, which resulted in one of the best National Championship the 5O5 Class has ever had.