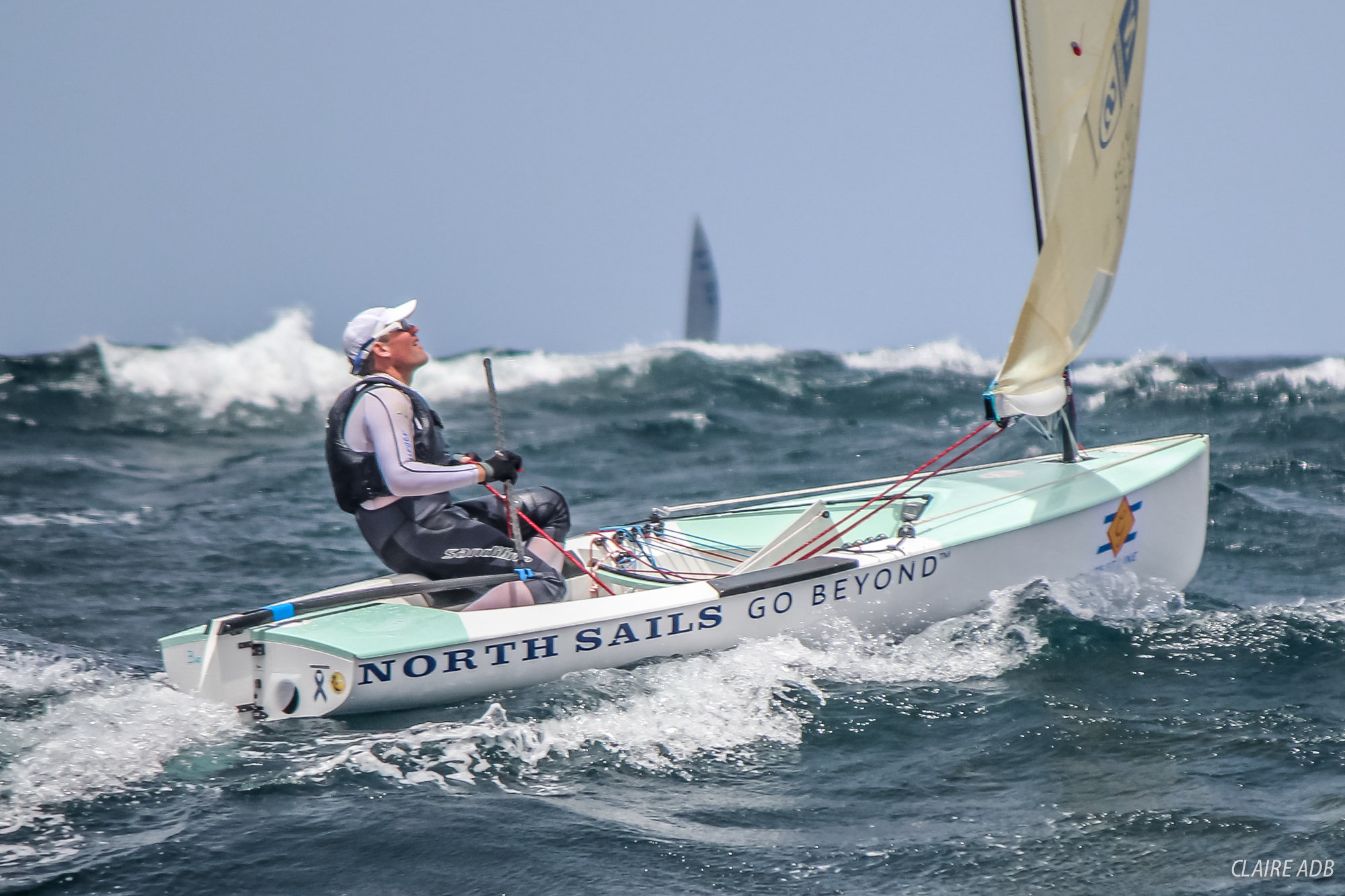 Six time Finn World Masters champion Michael Maier, from Czech Republic, has taken the lead in Barbados after another tough and windy day out on Carlisle Bay. Rafa Trujillo, from Spain, drops to second while Piet Eckert, from Switzerland, moves up to third.

The strong winds are not making anything easy for the 140 Finn Masters enjoying a fabulous championship in Barbados and for the third day in a row, the morning started with 20-24 knots on the race course. With an upper wind limit to start at 20 knots the fleet was held on shore as news from the course changed from heavy seas and 20-24 knots to moderating seas at 18-20 knots.

However on arrival, it was clear that it was going to be another big day with a huge cross swell keeping everyone on their toes.

Yellow fleet was again perhaps the easier of the two fleets to race in and this was capitalised on by last year’s fourth placed Eckert, who led all the way round in huge seas and winds going well past the recorded 22-23 knots. Fellow Swiss, Christoph Burger, also found some pace to cross second while Karl Purdie, from New Zealand, continued his good form with a third. Attrition downwind was high and for most, the goal was just to survive to the mark.

Trujillo built a nice lead in the Blue fleet, chased by Vladimir Krutskikh, of Russia and Marc Allain des Beauvais, of France, with Maier close behind. Trujillo extended on the fleet only to fall into a hole on the final approaches to the finish line. Maier capitalised on that and passed him, only to nearly lose it again as he headed for the wrong finish mark. He recovered and crossed just ahead of Trujillo with Allain des Beauvais sailing a great race to cross third.

With that, the Race Committee took the wise decision to send everyone in for the day. There is only so much fun you can have that is good for you.

Allain des Beauvais summed up the feeling of most people here when he said, “This is a fantastic venue. This is the first time I am sailing my Finn in hot water, and the first time I am sailing with flying fish, taking off in front of me, it is very nice. The beer is fine, the sun is fine, the beach is white, this is absolutely terrible, where will we find this again next time. It’s impossible to conceive.”

“The wind is a bit tricky but it has no density so we can sail when it is windy because it’s not so strong. Today I took the risk of the windshift on the left and was about to cover the fleet and two or three good tacks and the second upwind. I was a bit slow downwind because I am old, but at the finish we were lucky at the last mark with a right wind shift and I passed Krutskihk and finished third.”

On Wednesday the day begins with the Annual Masters Meeting, where, among other business, the 2019 venue will be decided between Skovhoved in Denmark, and Marsala in Sicily.

The 2017 Finn World Masters consists of a seven race series from Monday to Thursday, followed by a final race and a medal race on Friday.