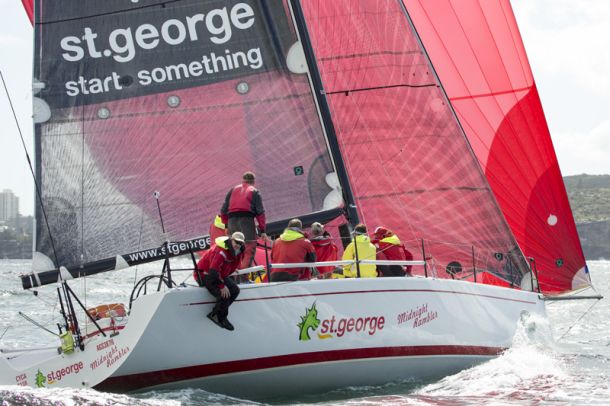 Two weeks ago Ed Psaltis, co-owner of Ker 40 Midnight Rambler, climbed the ladder to the loft of his garage. “I climbed this ladder 1000 times, thought I had taken enough precaution, but apparently not on the 1001st  time.

“I stupidly fell off the top of a ladder while storing sails in the loft of my garage. The doctors at RNSH reckon there should be a law against males over 50 going anywhere near ladders.

Renowned for his toughness after steering the old AFR Midnight Rambler through the 1998 Sydney to Hobart storm to victory, Psaltis is pushing himself to repair enough to resume his steering duties on Boxing Day.

While the injuries read horrendous, he is assured it is not that bad. Being at the back and low down, the broken ribs are not attached to the spine, “so, while still painful, recovery could be faster than breaking ribs at the front,” Psaltis claims.

“Also, the vertebrae are only minor fractures off the ends of the bone on the right hand side. Evidently the vertebrae down low flare out a bit from the central spine. So good news is my spinal cord is undamaged and can’t be damaged should I choose to become active sooner than later.

According to doctors he only needs to be able to overcome the pain, “however, muscle is attached to those tips so that is causing some discomfort!”

The doctors advised not to nurse the injury as it will lead to becoming immobile. So he must try and get up and walk around as best as he can. Psaltis took that advice and pushed it.

“In the first week I found I could walk around a local athletics park on a soft level grass surface. I did eight 400 metre laps each day over the first week, once the more severe pain went and I was able to get off the Endone!

“Second week, I very nervously tried a 50 metre pool. Injuries, I am told, can be exercised with less pain and impact on the affected area.

“Anyway, I’m coming towards the end of the second week now and I’m swimming one kilometre, 20  laps. Although only slowly, it is helping. The back and ribs don't seem to mind it.”

The concern for Psaltis and his crew, of course is that this is not the same as crashing off waves in the middle of Bass Strait, bashing into a southerly. “But I’m two weeks in, 2.5 to go, so hopeful.”

“The doctors think I’m a little crazy trying to get right for the Hobart but they did say no matter what I do, I can’t damage the area any more, it’s just taking the pain!

I took that as a 'yes you can go'! Although my wife didn’t seem to take it that way.”

Why wouldn't Psaltis push himself to get out there, over the years this polished, stable crew of the two Midnight Rambler's have won the overall once (1998) along with a few first in divisions over the years. Plus quite a few podium placings in division, under the evolving different handicap systems: IOR, IMS, IRC and ORCi.

Has he had any thoughts on contingency plans if his injuries stop him from making the start? “Don’t want to think about it really, but I’m talking to my co-owners a lot and, if this happened, we would need to decide if the boat goes.

“Not fair on the team, after all the work, to pull out. Especially with current performance of the boat, she has never been faster and is an absolute joy to sail.

Psaltis has often threatened over the years, as have many veterans, that this is his last race. He has made that claim for the 2015 running as well. Does that still stand? “Never say never, but currently yes.

“Whole bunch of reasons but I must say I was, as one old yachtie, very happy to hear the remarks that Bruce Taylor on Chutzpah made, just after he finished last year’s race, on the  dock. Guys like him are the real backbone of the race in my view. Bruce and crew have been the best of breed in the small boat part of the fleets for decades now. What brings me back is the chance to test ourselves against yachtsman as good as he/they are and, I stress they are all amateurs.”

He has been told the injuries are not long-standing and, once repaired, should not reoccur as the years pass. “It will take time to recover but I will regain full use of back ribs and the area in time. As my wife rightly points out and she was a nurse of longstanding at RNSH so she should know, full recovery will depend on how I treat the body while it's repairing.”

Even if the decision is made to not start in the race this year, the Psaltis legacy will not end there.

“One thing I'm very proud of is my son Ben doing now his second race with us, with me as skipper. My first three Hobarts were way back in 1979 to 1981 on a heavy displacement S&S 45 called Meltemi, my father's boat. I learnt so much from my old man over those years and will never forget that intro into the Hobart.

“I am hoping Ben has the same experience, though he keeps telling me I yell too much. He is probably right, but my excuse is I learnt that off my father!”