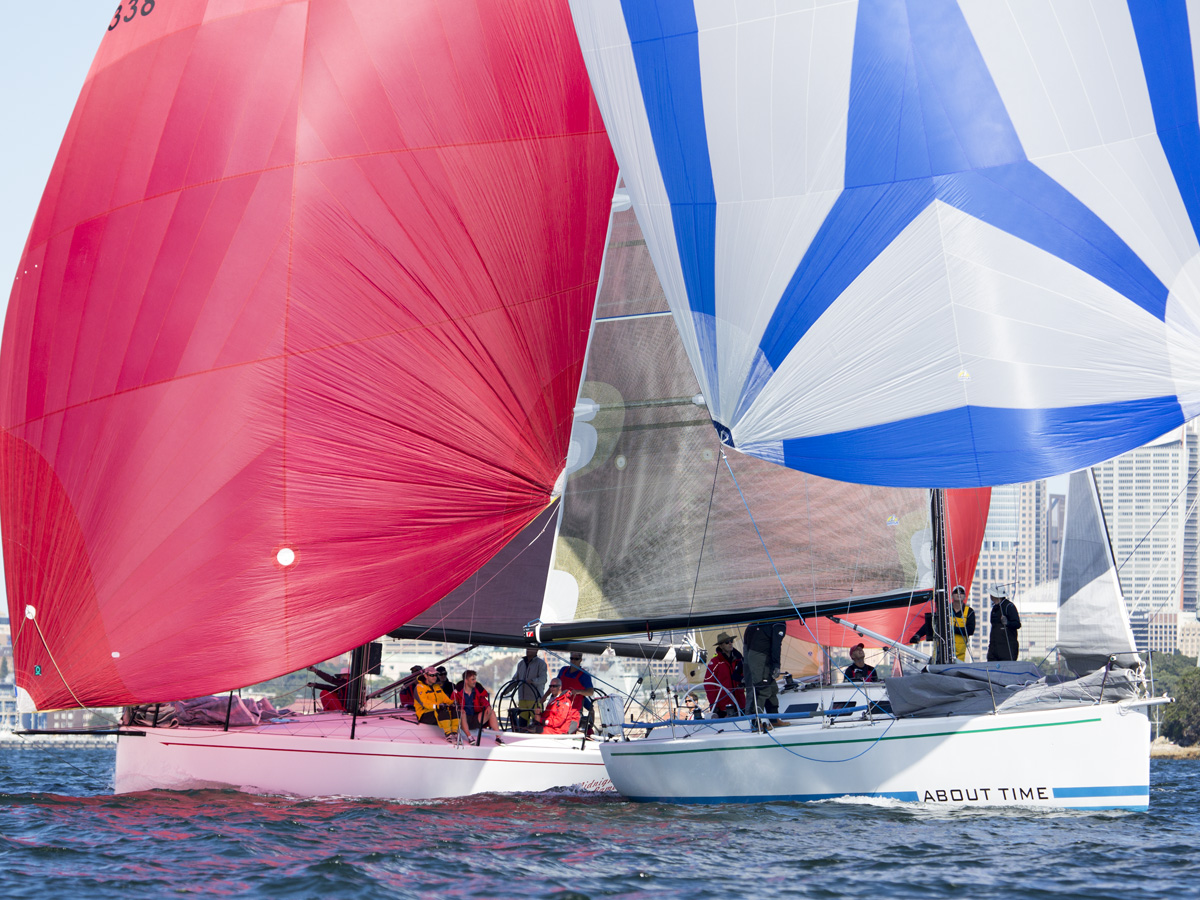 Ed Psaltis and his Midnight Rambler crew have broken the spell cast by defending champion, Julian Farren-Price (About Time), beating him by one point to claim the major trophy in the Cruising Yacht Club of Australia hosted Ocean Pointscore series – as Psaltis and his fellow owners bid farewell to sailing, selling Midnight Rambler to a Pittwater consortium.

About Time was trailing Midnight Rambler, the Ker 40 owned by Psaltis, Michael Bencsik and Bob Thomas by three points going into the final race of the series, from Sydney to Wollongong on Saturday. And although Farren-Price sailed his Cookson 12 to overall victory in that race, Midnight Rambler’s third place behind Noel Cornish’s St Jude, gave him the series by one point, once two race-drops were applied.

Midnight Rambler also won the PHS series, from About Time and Balance, which took race line honours in five hours eight minutes and one second.

“That was my last race,” Psaltis announced from aboard Midnight Rambler in Wollongong, where he and the crew and Farren-Price’s crew were enjoying a few drinks and the hospitality of Wollongong Yacht Club.

“Midnight Rambler has been sold and will be moving to Pittwater, so it’s a nice to go out on a high note. It’s a great boat they’ll be getting,” commented Psaltis, whose incredible sailing career highlights include winning the fatal 1998 Sydney Hobart with a Hick 35.

“It was very light outside – 5-6 knots only – and we didn’t sail well there, but JFP did,” according to Psaltis, who said when they reached Ben Buckler, the wind shot up to as much as 23 knots, although it mainly averaged 18-19 knots.

“It was an ugly sea, with a strong 2 knot current, and we were getting monstered by waves. The boat sailed me, rather than the other way around. It took us around an hour to decide to put a Number 4 headsail up. It worked and I was back in control of the boat again,” said the Sydney yachtsman, who said he would spend Easter aboard a houseboat with his parents.

All crews had to deal with the big shifts on the course. “It went from 170 degrees to 200, so we tacked a few times to get offshore, get with the current and go, but then the wind shifted to 160 degrees and caught us all out,” Psaltis said.

“Boats like Balance, Merlin, The Goat and St Jude were outside us – About Time was inside us – JFP is so precise. We all got hurt – the further out you were, the more hurt you got. We passed St Jude, and she was flying. They sailed a brilliant race on that boat, it just lit up,” he said of Noel Cornish’s Sydney 47.

On winning the series, Psaltis said: “Of course it feels great to win. To knock off JFP and his crew – they are champions. For us, it was a case of maintaining our pointscore lead and keeping About Time covered.”

Farren-Price was gracious in defeat and pleased to have won the series under ORCi. He knew from the outset it would be near impossible to beat Midnight Rambler in the decimated final race fleet.

“We’ve had great rivalry with Midnight Rambler all season. We were happy to win the race. We sailed one of the best tactical races we’ve ever sailed – picked the shifts really well,” he said.

“I want to pay tribute to Ed. He’s been a great rival, and I can’t believe he won’t come back to sailing. (Neither can the rest of us). We’re aboard Midnight Rambler now, celebrating with them,” said About Time’s owner, who has confirmed he will return to the series next year.

“I want to publicly thank my crew. They are a great, loyal bunch, and I can’t do it without them. I feel privileged to go to sea with them,” said Farren-Price, who also thanked Wollongong Yacht Club for the welcome, “they are really looking after us – you should see the food they’ve put on for us.

The race started at 10am off Point Piper on Saturday and finished in Wollongong, with a number of the fleet unofficially racing back to Sydney the following morning.