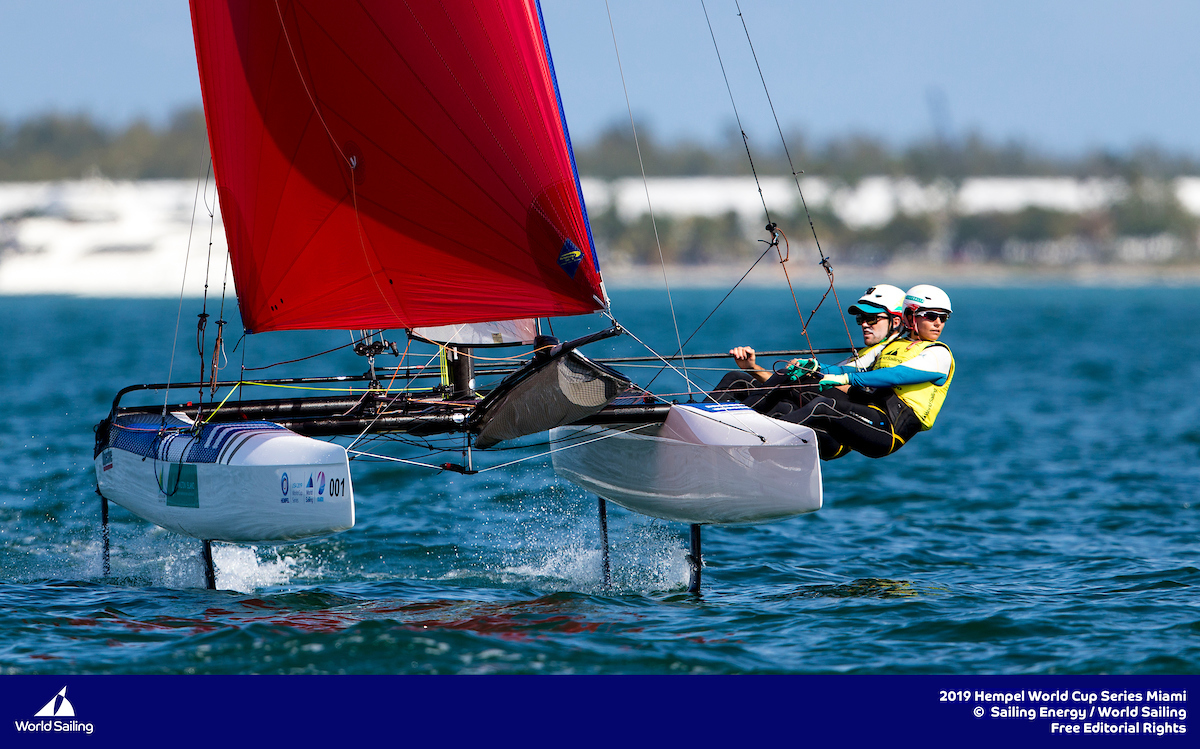 The stage was set for an action packed first race of the day. Alex Maloney with Molly Meech (NZL) had a commanding but catchable lead ahead of two chasers, Martine Grael with Kahena Kunze (BRA) and Charlotte Dobson with Saskia Tidey (GBR).

A sunny Miami day at minimum wind strength meant it was guaranteed to be challenging conditions. From race start, the Kiwis were under pressure, getting rolled at the start and having to tack out. Meanwhile, both Dobson/Tidey and Grael/Kunze had good starts, especially Grael/Kunze who won the boat on a last moment double tack.

The Kiwis recovered nicely through with a slight gain on the bottom right of the course, a trend that would play out for the rest of the race.

The next team to take advantage of the right was Dobson/Tidey, who moved into the lead 2/3rd the way up the first beat, but it was the Brazilians who went right last, and they caught up to the top bunch, rounding a close fourth behind Sweden, Denmark, and Britain.

Most of the fleet straight set except for Grael/Kunze who gybeset, heading back to the side that kept paying on the beat. They passed two boats on the downwind, to only trail the Swedes by the leeward marks.

Interestingly, the leading two boats rounded the go left mark, while Denmark’s Schutt and Christiansen rounded the go right gate. A third of the way up the beat it was the Danes who were up into second, while most of the fleet, and critically the Kiwis, were going left.

Grael/Kunze then made the critical move, tacking back to the right and getting the farthest right of the leaders. By the top of the second beat they were back into second place, with the Kiwis falling all the way to ninth place.

By the final downwind, everyone had figured out the power of the right side, and they all gybeset shutting down passing options. Brazil carried through to the finish in second, while the Kiwis closed tightly to the group in sixth through eighth, but couldn’t pass and ended up loosing their regatta lead.

Once again, Grael/Kunze used their smarts and skills to create the conditions for an unlikely but simultaneously inevitable win. The damage from Maloney/Meechs disastrous medal race was limited to loosing just the one place overall, as they held on to the silver medal. While Dobson/Tideys fourth place finish wasn’t enough to make any passes, it kept them in the bronze medal position.

The Nacra 17 medal race started with full intensity. An off-camera match race between the Waterhouse/Darmanin (AUS) and Albrecht/Nicolino (BRA) saw the leading Aussies start in a commanding position. They hit the start line at full speed with the Brazilians directly behind them.

The Brazilians, who have been the fastest boat all week in light air, tacked right away to clear their air, but the Australians clearly had a game plan to match them tightly, and covered. In two more tacks up the beat, Waterhouse/Darmanin matched the Brazilians very closely, and extended their lead.

Both teams chose the best side of the course as well, and ended up leading the race by a fair margin over the bulk of the fleet who went left off the start line.

Waterhouse/Darmanin were first to get foiling downwind and extended their lead to a quarter leg.

The focus of the race then shifted to the battle for the bronze medal. 2016 Gold medalists Lange/Carranza were aiming to fend off three chasing teams. Immediately behind them were the other Australians, Darmanin/Copeland, as well as Britains Gimson/Burnett and Austrias Zajac/Matz. On the second beat, the Argentinians went quite far right while the Australians when quite far left as the wind got a bit patchier. The Argentinian champs came through on the right side, sailing in fourth place in the race easily holding onto the Bronze for another medal performance and their stories careers.