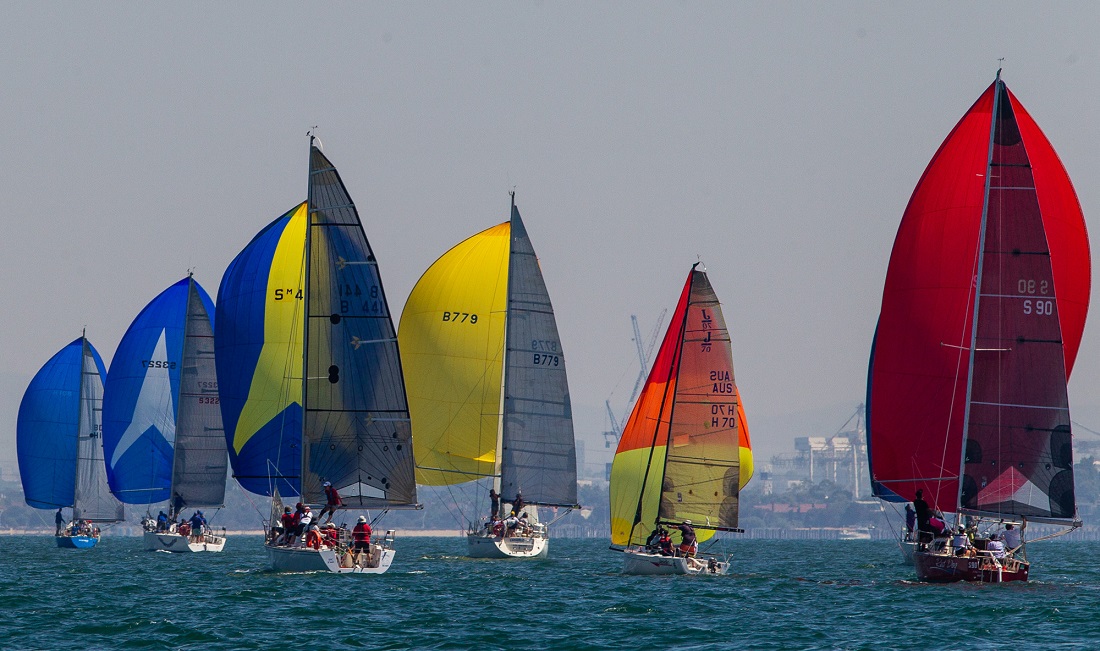 Racing was delayed for some 20 minutes as officials waited for the breeze to fill in, with racing getting underway soon after 11.00am.

“It was light and variable – not what was forecast,” Irving said tonight after overcoming challenges from Sandpiper, skippered by Katrina Hartman and third placed Le Cascadeur, skippered by Leonore ‘Leo’ Eeckman.

“At least it wasn’t as hot on the water as it was on land and in the end we had a pretty consistent 7-8 knot breeze once we started.”

Cavarlo is a fairly heavy yacht, “So we were really surprised to win in light conditions,” Irving said of her crew’s win under PHRF – the category under which is the Trophy is decided.

Of their day in general, the Victorian skipper commented: “We didn’t use our spinnaker on the second downwind leg, because we lost the halyard. We retrieved it out of water and attached it to the genoa halyard instead. Then we had to put the genoa on a furler, which took some strength and time.”

However, Cavarlo had got off the start at full speed and pulled off a move upwind that equalled out the kite mishap.

“We sailed much further south than the rest. We wanted to try something different and get out of the air of the other boats. We ended up laying the mark in one tack, while most the others were doing a lot of tacking.

“Our crew had to think on their feet. I am delighted with the way they worked together,” Irving said of the women, a blend of experience and inexperience.

“We lost some time, but it’s one of those things – and I always say you should never give up – so we didn’t.

“You usually win because nothing went wrong, but that wasn’t the case today. Somehow, we still managed,” Irving said wryly.

Remarkably, she only took up sailing 10 years ago: “I started as an older adult and these are great regattas for getting women into sailing. Last year we had a PHS win at the Port Phillip Women’s Championship; our first significant result.”

Of the competition, the Victorian said: “Monica Jones was up there – she’s a really good sailor – always good competition.”

Irving ended, “The Presentation was great, smartly run; we all enjoyed the food and the occasion in general.”

“We had a really good start, tacked straight off the line and got to top mark fairly quickly. It started well and went well from there,” said the French skipper who has missed the last two years of the PPWCS, so was happy to be taking part again.

“A perfect win in perfect light winds for us,” Eeckman commented. “This is the first time this female crew has sailed together – and for two of them, the first time on Le Cascadeur.”

Eeckman had one man join the five women on board the Southern Ocean 31, “Ryan Blackstock – he is my partner and also coaches me. Complicated, huh,” she said laughing.

The Le Cascadeur crew plans to stick together and complete the series as training for the Australian Women’s Keelboat Regatta in June – so far so good.

Like Marnie Irving, Eeckman cited today’s IRC winner, Monica Jones (Salamander III) as her benchmark. “We keep an eye on Monica. She’s usually some distance in front of us – but she’s our main competition.”

Serious Yahoo, skippered by Vanessa Twigg was second to Jones, with Young Bears again filling out the top three.

Twenty-one boats took part in the Jennifer Goldsmith Perpetual Trophy, which is open to yachts from all clubs, and forms part of the Port Phillip Women's Championship Series. All entry fees are donated by RMYS to melanoma research.

The next race of the Series is the Women in Sailing Challenge, hosted by Sandringham Yacht Club on Sunday 17 February.

For entrants and full results: http://www.womenandgirlsinsailing.com.au/keelboats/portphilip2018-2019/