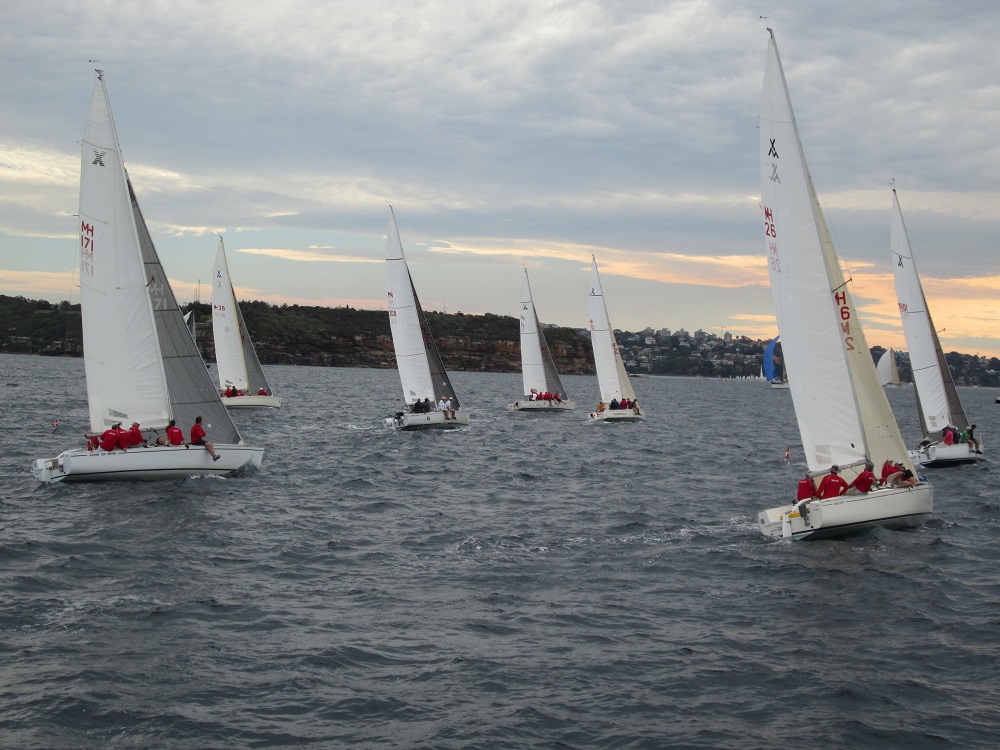 Although the design is forty years old this year, the annual Waitangi Challenge teams race between Adams 10 crews from Victoria and New South Wales, is still hotly contested.

It is a testament to the best of one-design class rules that the Adams 10 remains such a competitive class. This should be heartening to the MC38s that raced on the same course as the Adams in their own regatta. Although the difference in design and cost is striking.

Arriving in Sydney as holders of the Waitangi Cup, the Victorian fleet is the strongest with 18 yachts actively racing with various Port Phillip yacht clubs. But it was the home team from Middle Harbour Yacht Club returning the Waitangi to NSW with a comprehensive win last weekend.

The Waitangi Challenge began in 2000 when the Commodore's of Middle Harbour Yacht Club and Royal Melbourne Yacht Squadron decided on the teams race to keep interest in the yachts alive. Waitangi was the name of the MHYC Commodore's yacht at the time. Alternating between Middle Harbour and one of the Port Phillip yacht clubs, four teams from each club are given an A10 from the host club in a blind draw out of the cup.

Last year in Safety Beach the MHYC team were beaten in a countback. So it was important not to lose on home waters. Home crews are not allowed their own yacht and sails can not be swapped.

Unfortunately, only three crews could make the trip up from Melbourne so seven yachts raced, which meant in the results the last A10 across the finish line in each race would be dropped from the score.

Three races were started by MHYC in a Sunday light winter breeze between Manly and North Head. Given a crew of up to seven can race on an Adams10 for under $30,000 it was fun to watch the six MC38s start first with their attending chase boats, mother ships and even an overhead helicopter. The racing was just as tight.

The crew from Powderhulk were sailing Rob Clark’s Kick & Chase and won all three races, giving the home team the edge in the final points. Royal Yacht Club of Victoria crew sailing Rock Solid came second; No Friends crewed by MHYCs Luminae Lunae came third and Royal Melbourne racing Powderhulk fourth. The final results saw MHYC come out on top with 22 points, Victoria 43. In each of the three races the fleet finished within two minutes.

Winning skipper Patrick Delany was sailing in his first Waitangi Challenge and enjoyed the spirit of the weekend, “team racing was a welcome relief from week to week intense competition between MHYC boats – for once we were on the same side.

“While we won all three races it was largely due to help from our team mates – it looked more like a game of gridiron than a yacht race sometimes as our team mates blocked any Victorian who challenged our lead.”

That team spirit was strengthened with the addition of bright red MHYC team t-shirts to make it easy to spot whose side each yacht was on.

Principal Race Officer Phil Yeomans also enjoyed the day as he is a veteran Adams 10 sailor, “as always it was an enjoyable event with no protests and I know from experience both state teams enjoy the challenge.”

After racing, the presentation of the Cup was made in the main bar and President John Roxburgh and Divisional Rep Geoff Charters accepted the trophy promising to bring it back to MHYC when they win next year in Port Phillip. Delany agreed “after the race we swapped techniques on how to get our Adams10s performing in different conditions. The weather and seas are very different between Port Phillip and the Harbour.

“There is always a lot to learn even though the boats are the same.”

But, as Yeoman's reminded the winning team: “next year it’s off to Victoria to defend, something that’s always hard.”