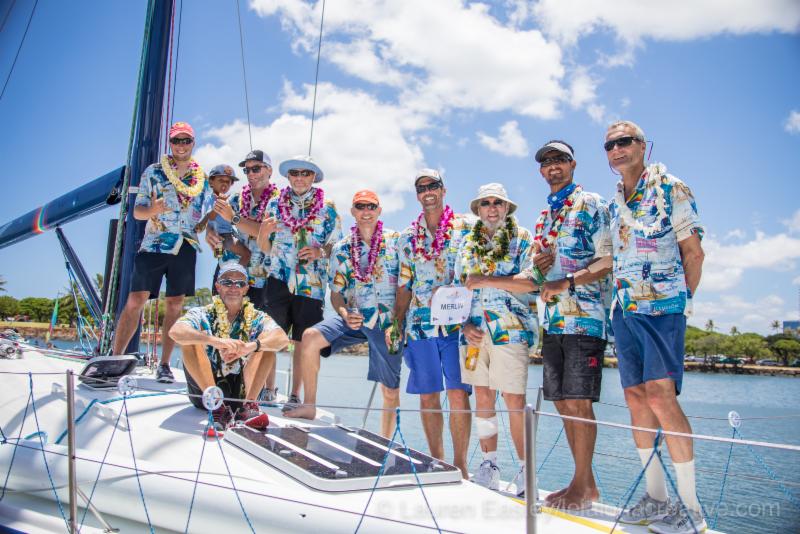 Honolulu, Hawaii: Today a Transpac legend that came to symbolize the Fast is Fun philosophy in ocean racing crossed the finish line at Diamond Head 40 years after she did it the first time.

Bill and Lu Lee's venerable Lee 68 Merlin. Her elapsed time of 8:02:34:09 did not set any records this year, but this was still better than the elapsed time of 8:11:01:45 that she set in her original configuration when Lee and his team raced her in a very windy 1977 Transpac, a testament to the upgrades made to the boat over her long and storied life.

“Lu and I are the eighth owners of this boat for the second time,” said Lee, who navigated this race to be second (currently) in corrected time behind another legendary finisher today, Roy Pat Disney's Andrews 68 Pyewacket.

Disney's newer boat rates slower than Merlin, so being only 2 hours behind but allowed several more hours gave her the corrected time edge. Nonetheless, Lee said they had a fantastic race on Merlin.

“We had no major failures or breakdowns, and this boat has had 7 keel changes, 4 mast changes, deck layout changes and countless sails through its life. Right now it is set up nicely. She sails better, easier and faster than the original boat, so much so it’s really a different boat and a pleasure to sail.”

It was this boat that in 1977 turned offshore yacht design in an entirely new direction when Lee's design concept was to keep the boat long, narrow, and intentionally light weight to sail efficiently in the off-wind races of the US West Coast, yet to also be at the prevailing IOR Rating of 70.0 feet, which was the defined Maxi rating limit of those days.

Other conventional IOR Maxis were often referred to as “lead mines” because of the large keels they needed to keep their stability for their massive sails and 80-foot lengths. The conventional maxis of this era were designed to perform well relative to their rating in all conditions, whereas Merlin excelled in one direction alone: downwind.

It was this design feature that then prompted a new generation of ULDB (Ultra Light Displacement Boat) designs to not necessarily rate well and win on corrected time, but to be first to finish.

When Merlin set a new race record in 1977, she not only beat it, she smashed it by defeating Windward Passage's record time set in 1971 by over 22 hours. So remarkable was this boat that this record stood for 20 years before beaten by Roy Disney's Pyewacket in 1997.

And here she was again: finishing at Diamond Head under sunny skies and tradewinds with the same rainbow colour scheme on her spinnaker that she had in 1997. Lee even donned his Wizard cape at his team's Aloha party at Hawaii YC, just to complete the nostalgia.

Asked about his vision of the future of this race, Lee said “I think it will continue to do what it does now: it attracts the really fast boats with all-pro crews who will continue to hunt for records on big 49-ers, and the amateur teams who are sailing boats they can handle comfortably. There's a lot for both in this race.”

Meanwhile, there are other stories on the docks at the Ala Wai marina on Transpac row, including one that looks forward to that promising future that Lee mentions. At 14 years old, Gray Hemans may not be the youngest crew to race Transpac, but she might be the youngest who has gone the fastest.

Her dad Chris Hemans's Rogers 46 Varuna looks serious with its all-black carbon fibre attire in the mast, hull and deck, and it has few creature comforts for its crew of eight, including Grey, which allowed them to stay light and have their best-ever elapsed time of 8:11:26:49, good enough to have the corrected time lead in Division 3.

Even though the 8th-grader has been actively racing smaller boats like Sabots and 29-ers in and around Newport Beach, her first love is sailing offshore.

“I love the open space, the sky, the sea, everything about it,” she says. She then rattled off a long list of offshore races she had done on Varuna for the past two years to train and prepare for this race “mentally and physically,” and she feels that she was every bit as part of this team as the older guys.

“Everybody accepted me and I know everyone so well I would trust them with my life, they are like family now,” she said. “This was a great race, it was a long time in preparing, but I'm glad I did it and want to keep doing more.”

And out on the race course the boats are finding the pleasures and pains of being in warmer climes with variable winds. Their race trackers are showing a lot of course changes and variable boat speeds, indicating some boats being more aggressive at working through the squalls and shifts.

From Bill Halvestine's SC 50 Deception came this report where they got a lot of some but none of the other:

“No squalls. None. On the horizon, sure, but not for us. Slow, lots of shifts and jibes, spinnaker screw up followed by 7-8 knot breezes in the AM.

We lost massive ground to everyone last night. Whatever we did, we did it hard and owned it.

Fiche passed less than a mile behind us this morning. Our supply of tortillas is now on ration, 1 per person per day and trading has already been attempted with zero success. We tried to hail Fiche on the radio to see if they would trade us for mayonnaise but they didn't answer after three attempted hails. Bastards. Either they knew we had nothing to trade or their radio was off.

At least Oaxaca is still behind us, we have that.

It's hot today, full sun, no clouds near us. We're drinking crystal (meth) light infused water like Richard Simmons is going out of style and we're sweating in the 80's.

More birds around us, lots of flying fish (the fish, not the boat) we just passed, but plenty of them too.

We finally stepped into some breeze about an hour ago, gybed and we're hoping this takes us in the right direction.

Cornue pulled a funny yesterday. Randall R asked him to tie the sails to the deck repetitively and Peter C. gave him the stink eye of death. In the middle of the night watch Randall R was forced to untie an obscene amount of knots in prep for our spinnaker change. Peter C seems to be in better spirits today.

A few more days to go. Send wind, but don't send Bill emails. His fan club is growing out of control.

The Canadians on David Sutcliffe's TP 52 Kinetic V remain in good spirits based on their photos, perhaps because as shown on the tracker they have been close running with another Division 1 rival boat only a few miles away, Jim Partridge's Antrim 49 Rapid Transit.

The next three boats calling in at 100 miles out are Tim Fuller's J/125 Resolute, Joel Ronning's SC 70 Catapult, and John Sangmeister's turbo SC 70 OEX, due in after dark tonight. And in the pre-dawn behind them should be Larry Andrews's Summit 40 Locomotion, James McDowell's SC 70 Grand Illusion, and Edward Marez's SC 70 Buona Sera.

Full results and all information: https://2017.transpacyc.com