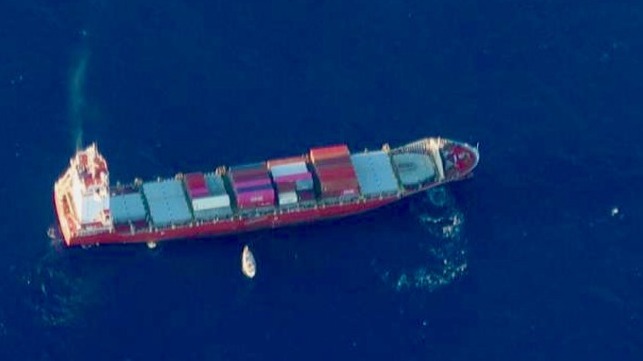 On Sunday, with assistance from the U.S. Coast Guard, two commercial vessels rescued the crew of a dismasted sailing yacht at a position about 570 nm southwest of the Hawaiian Islands.

Joint Rescue Coordination Center Honolulu received a notice on Dec. 23 that the sailing yacht Coco Haz III had dropped out of contact during a voyage from Osaka to Oahu. Three people were aboard, including two Americans and one Japanese national.

The JRCC worked to make contact with the boat's owner, and with the assistance of the Japan Coast Guard, the JRCC made contact with the owner's representative. On Dec. 25, the JRCC and the Japan Coast Guard held a conference call with the liaison for the owner, who confirmed that the Coco Haz III had been dismasted on Dec. 19 and that the last communications with the boat were on Dec. 20. The liaison reported the crew had 500 gallons of fuel, two weeks of food, one month of water and an orange life raft aboard.

The last known position of the boat at the time plotted was about 700 nm to the northwest of Oahu, and JRCC Honolulu watchstanders directed Sector Honolulu to send an AMVER request for assistance to all merchant traffic in the area.

On December 29, the container ship Nobility spotted the Coco Haz III about 200 nm outside of the search area. According to a family member's account of the voyage, the yacht's crew had jury-rigged a makeshift sail, which had carried them beyond their expected drift range.  A U.S. Coast Guard HC-130 crew diverted to the scene and air-dropped an EPIRB and emergency supplies to the yacht. The Nobility was not able to safely bring the men on board, but the container ship Kalamazoo arrived on scene and rescued them the same evening.

All three of the sailors sustained injuries during their ordeal, none of which were life-threatening. The Kalamazoo is expected in Honolulu on January 2 and will deliver the survivors to shore.

“We appreciate the support of the good Samaritans aboard the commercial vessels Nobility and Kalamazoo who made this rescue possible,” said Lt. Diane French, command duty officer, Coast Guard Joint Rescue Coordination Center Honolulu. “This was a difficult case given the remote area of the search and a lack of communications with the crew. This case is a big win for the Automated Mutual-Assistance Vessel Rescue System, which the Kalamazoo subscribes to, the Safety NET message system, and the mariners out there willing to help each other.”