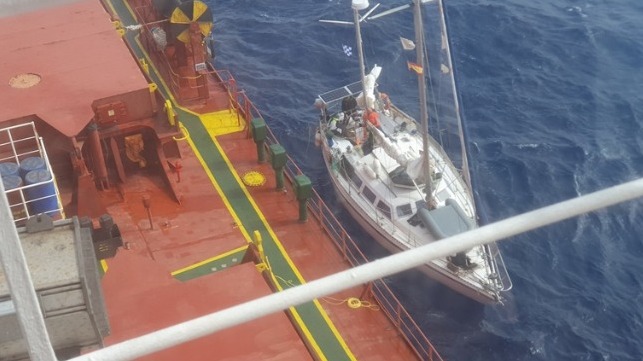 On January 10, the crew of the geared bulker Sunda rescued a sailboat adrift in the mid-Atlantic. Captain Ivan Versic, along with his officers and crew, found and saved four people who were stranded aboard the boat due to an engine failure, according to vessel operator Seastar.

After learning of the sailboat's situation, the Sunda diverted to meet up and effect a rescue. “We made contact through VHF radio and found out that everything was fine with the crew, only they were tired. We agreed to delay the rescue for the next morning due to inclement weather. Shortly thereafter, we made the first visual contact with the boat, and we stayed nearby all night in case of an emergency,” Capt. Versic told media.

The operation to bring the survivors aboard began the next morning. After initial difficulties due to poor weather conditions, the yacht and the bulker were finally aligned well enough to get a line across, and the boat was alongside the accommodations ladder at about 1500 hours.

With all four people (and one bulldog) safely aboard, the Sunda got under way once more, bound for Brazil. The yacht was left behind.

The Sunda offloaded her passengers at the port of Macapa, at the mouth of the Amazon. She has since continued on her commercial voyage, and as of Monday she was berthed at the riverine port of Santarem.