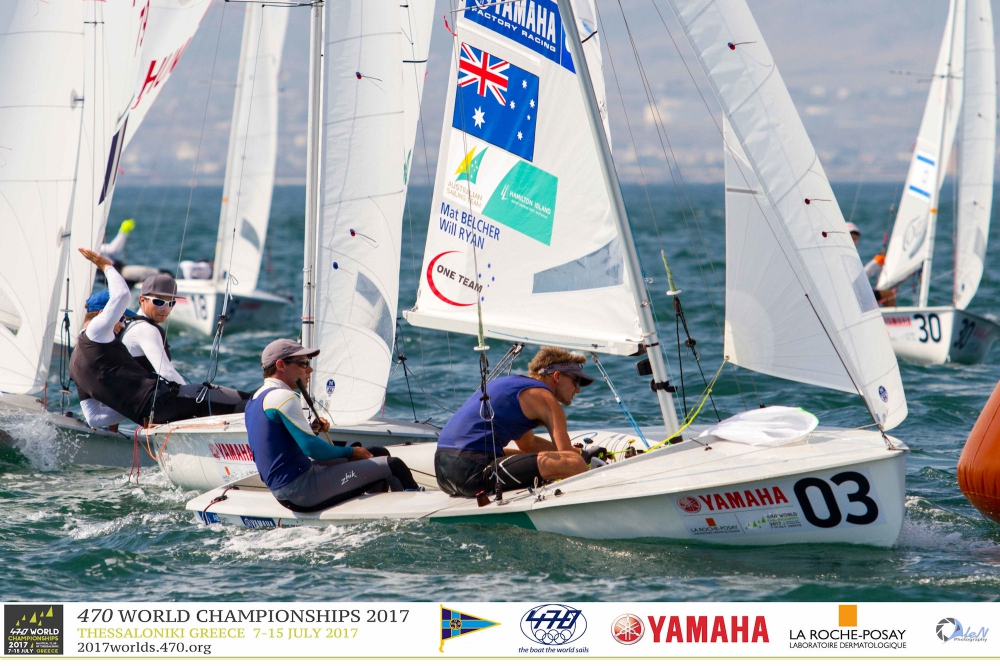 When the thermal breeze kicks in, it usually does so with certainty, but all change today as when the wind filled in the window for racing was shorter than usual, forcing the Race Committee to abandon race 9 for the men and women gold fleets.

Teams were postponed ashore until around 1500 hours, before being released to the race track for a 1600 hours start. So, just one race for the gold fleet, with the silver achieving two.

The points margins at the front of the gold fleet is close, but it is the discard that makes all the difference. Anton Dahlberg/Fredrik Bergstrom have today used their discard score, an 18th, whilst in the women, Agnieszka Skrzypulec/Irmina Mrózek persist with a perfect scorecard of top three finishes, and have a discard race in hand should they make a fault in any of the three final series races tomorrow.

New faces and future stars have punched high and made themselves known in every single race, with the highlight for many of the younger teams being a top 10 finish against a talent-filled fleet of Olympians and Champions. Elation to the reigning 470 Junior European Champions, Giacomo Ferrari/Giulio Calabro, who today claimed their second win of the series and move up to 6th overall.

The three races scheduled on Friday to decide the medal race line-up will be physically and mentally demanding, with the added challenge of a temperature well over 35 degrees.

Sweden’s Anton Dahlberg/Fredrik Bergstrom had a brief dip in form, and with it racked up their discard score of 18th, but still stay out front. David Bargehr/Lukas Mähr upgrade to 2nd and Mathew Belcher/Will Ryan drop to 3rd.

Flash points happen and today was a day to rise above any setback ahead of Friday’s packed three-race day.

“It became a little too intense,” explained Dahlberg on the reason for their change in form. “Once we started to make a mistake it sort of became a snowball effect and we couldn’t really stop it and come on top again. It was tough for us today. Three races tomorrow and we will be ready, that’s for sure.”

A performance pedigree as deep as that of Mat Belcher/Will Ryan ensures they are always the ones to beat and whatever position they find themselves in have an extraordinary capacity to make gains to the podium.

“Today we were a little bit back in the race, but continued to fight our way though and got another keeper,” Belcher explained referring to the pair’s 4th place.

“It was nice to try and even the playing field with Sweden now having a drop, it gives an opportunity. It is a nice position to go into tomorrow. Three races anything can happen, but 10th is our worst place and we are looking for every opportunity in these light and tricky conditions.”

The leaderboard top three have separated themselves from the rest of the fleet, with 19 points separating the Australians to New Zealand’s Paul Snow-Hansen/Daniel Wilcox in fourth. The Kiwi Olympians have been steadily climbing up the leaderboard and will need to pull out some more top ten results to advance to the medal race in podium contention.

Giacomo Ferrari/Giulio Calabro opened their World Championship with a race win, and today again forced the world’s best to walk in their shadow. The pair found their lane upwind, read the shifts and arrived at the first mark in 2nd place.

“It was good for us as we are very young, and we won the first race and then did two places in the top 10 and now here in gold another win is very good,” smiled Ferrari. “We have done another good race today.

“We know there are a lot of big names in the fleet and we wanted to try a lot with these guys and for us it is a good Championship. We want to learn a lot.”

Responding to how the young partnership stays cool in such a high-profile fleet, Ferrari said, “The tension is high, but we are very confident with our speed, our decisions on the wind and shifts and we try to be calm and we then go very fast.”

But the real focus in 2017 for this young talent is to defend their 470 Junior European Championship title next month in Italy, before heading to the Tokyo 2020 Olympic venue in Enoshima for a shot at the 470 Junior World Championship medals.

“It will be a big day and we want to do a big battle. We will see,” grinned Ferrari on the three races scheduled on Friday to decide the medal race line-up.

In the silver fleet, the battles are just as intense with Japan’s Kosuke Demichi/Taiga Nakagawa scoring 4,1 to lead the pack.

A bit of luck fell the way of Skrzypulec/Mrózek, as they were over the starting line in the first attempt to start race 8, but as the race was abandoned the penalty was cleared and they went on to finish 3rd.

“We were fighting, fighting each position and eventually got back to the front,” explained Skrzypulec. “It was the lightest day so far and really tough, and the starting line was really long so we had to decide early on which end we wanted to start, as with such a breeze it is impossible to change your mind and change your side of the course. These are not my favourite conditions, as I prefer to play a bit with speed and change gears and today we just had to stay patient and focused. It was a really mental game.”

Germany’s Nadine Boehm/Ann-Christin Goliass claimed their first race win and go into the closing day of final series racing in 20th. Finishing in 2nd and just one place ahead of the Germans in the overall standings are Italy’s Elena Berta/Sveva Carraro, the 2017 470 European Championship silver medallists.

“Today finally we had a really good race, and we are very happy as we had not felt really good, and this is the first day we have not had a problem with the boat and other issues,” said Berta in reference to boat damage sustained in an incident soon after the race 3 start on the opening day.

“The wind was lighter and it was all about finding the pressure and the shifts, which we did. We will try to do our best we hope to get three good races tomorrow.”

Until a black flag penalty in today’s race, Australia’s Nia Jerwood/Monique De Vries were riding high, sitting just outside the top 10. They are now in 16th, although still well ahead of the goal they set of qualifying to gold fleet. They have now reassessed their goal and are gunning for a top 10 finish, which will qualify the pair to the Australian Sailing Team.

“It’s very big and a bit of a carrot,” grinned Jerwood on the possibility of making the AST grade. “We are doing better than expected, so we are pretty happy at the moment.”

“We had time here between Kiel Week and the Worlds starting, so that was good to just get used to the heat and the racing areas,” continued Jerwood on the experience gained racing at lead-in events and training in Thessaloniki.

Next up, the Australians will head to Enoshima, Japan for the 470 Junior Worlds.