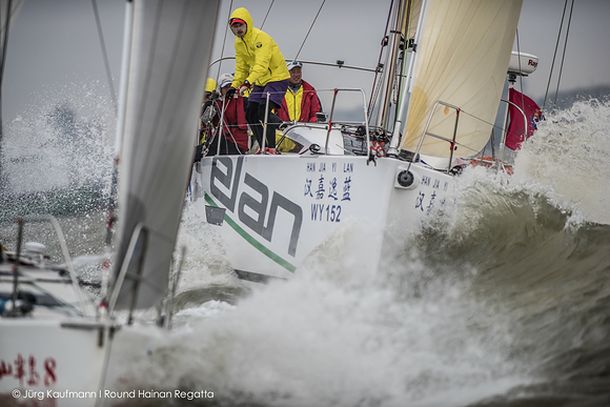 Mengzi took line honours in the 120nm offshore leg from Sanya to Wanning at the Round Hainan Regatta, crossing the line in the early hours of Wednesday morning, in just less than 22 hours. Both IRC fleets set for the second offshore leg to Sanya in challenging conditions

The relatively small IRC 3/4/5 boats encountered pretty tough weather conditions, 20 to 30 knots and short, steep waves that forced most of the fleet to abandon racing, among them one of the early favourites, Mills41 Ambush that reported issues with two jibs and the mainsail. Only six boats were able to cross the finish line. Four boats in class IRC4 were able to reach the line unscathed with the overall winner Mengzi in first, HNA sailing Team in second, Wanzhu in third and Lianchuang in fourth. In class IRC3 the only finisher was Hanse 575 Xim that finally reached Wanning after one day and three hours of sailing. The smallest boat taking part, Banshanbandao, a Sun Fast 3200 skippered by French Laurence Nicolas, finished in shortly over 22 hours, getting in second overall and scoring a solitary win in class IRC5.

Action resumed in Wanning on Thursday with the last in-port on the programme. On the short windward/leeward course, with some 15 knots and choppy sea, class IRC3 winner was Ambush, HNA Sailing Team scored a first in IRC4 and Banshanbandao in IRC5. The eight boats will leave tomorrow for their second and final 120nm offshore race back to Sanya, where the two fleets will meet up again.

In the island's capital Haikou big boats got ready for the start of the second 280nm leg that will take them back to Sanya, sailing along Hainan's east coast. During the usual skippers' briefing the race committee informed the teams that the weather forecast indicating pretty strong conditions, with a gusty north-easterly of around 20/25 knots for the first section of the course. The organizers' focus being on safety, all boats are equipped with satellite phones for constant communication and with tracking devices, two waypoints were moved to keep the fleet out of the worst of the wind and swell and from the coastal areas where the South China Sea currents are stronger.

On Thursday, under grey skies and drizzling rain in some 10/15 knots of NE breeze the 12 boats battled on windward/leeward in-port race where RHNDubois50 Sanya and SunFast 3200 Old boy Dream Team scored a win in class 1 and 2 respectively. Shortly later the fleet set sail for Sanya where the leaders are expected to finish at around midnight Friday, local time.