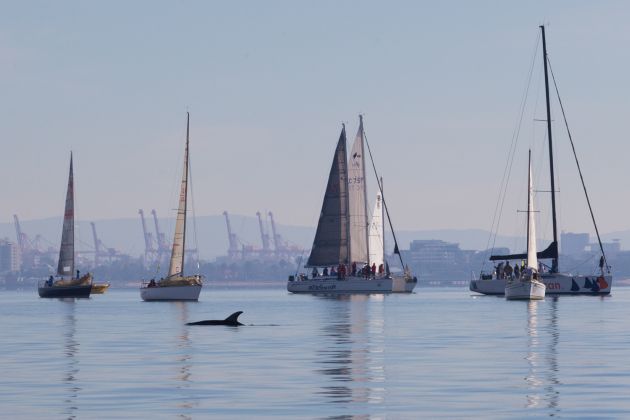 AWKR - a dolphin swims by during the morning glass-out. Photo credit Bruno Cocozza.

Day two of the Australian Women’s Keelboat Regatta looked like a fizzer mid-morning, only good for rafting-up and dolphin spotting until a light southerly breeze set the wheels in motion for race officer Lou Hutton and her Royal Melbourne Yacht Squadron team to set up for races four and five.

Colleen Darcey’s Tasmanian crew on the Archambault 35 Absolut has thrown everything at the slippery Melges 32 Envyus and its talented NSW crew, but single digit wind strengths are giving the Melges the edge and they now lead AMS division one by three points and EHC results by one point with one race to go.

“The conditions have been ideal for the Melges and they have done very well,” Darcey acknowledged. “The best part of today was getting 10 knots of wind and being able to stay with them. The regatta has been really good, though light and I think the crew has done a phenomenal job to keep the boat moving. I don’t think we’ve stalled at all and I’m really proud of my guys.”

Darcey, still first on IRC handicap, is hoping a couple of the larger boats absent this year return in 2018 so there’s a bigger division one and maybe the option for the Derwent Sailing Squadron to field a second team. “It’s great to see the S80s in big numbers and the camaraderie among the fleet and I hope next year some of the bigger boats return as I’ve got crew coming out my ears wanting spots!”

First and second in AMS division two results are two of the three S80 teams from the Townsville Sailing Club, Imaginer skippered by Renee Cordingley and Good Question skippered by Donna Heath. Collectively the 15 TSC sailors call themselves the ‘Magnetic Maidens’ and they have brought plenty of energy and sailing know-how, to this year’s regatta. Video of an interview with Jennifer Telfer from Imaginer.

Fiona McManus, skipper of the S80 Outlaw representing the Northern Territory and Darwin Sailing Club, has travelled to Melbourne with five sailors, four of them new to the AWKR. Late afternoon back at the Royal Melbourne Yacht Squadron while enjoying a beer and a sausage – courtesy of the Boat Buoy team of men supporting the women’s regatta – McManus spoke about day two: “It was a challenging day though we do a lot of training in light weather in Darwin so it was ideal for us.”

“This is my fourth AWKR and there are six of us altogether, four are new to this event and they are having a great time though they are a little thankful it’s not blowing 20 knots. We’ll all go home and talk up the weather and maybe we’ll coax a few more down next year. The interest is building in Darwin for this regatta.”

A drop now comes into play, allowing those crews which disappointingly missed the cut-off in race one to lose their DNF (Did Not Finish). Full series scores after five races.

There is one race remaining in the series and Hutton expects to run a final laid course of a reasonable distance, likely to be four miles for division two and six miles for division one, if the forecast westerly wind holds up on Monday June 12, 2017. The Bureau of Meteorology is predicting westerly winds during the morning then tending west to south westerly 10-15 knots during the late afternoon.