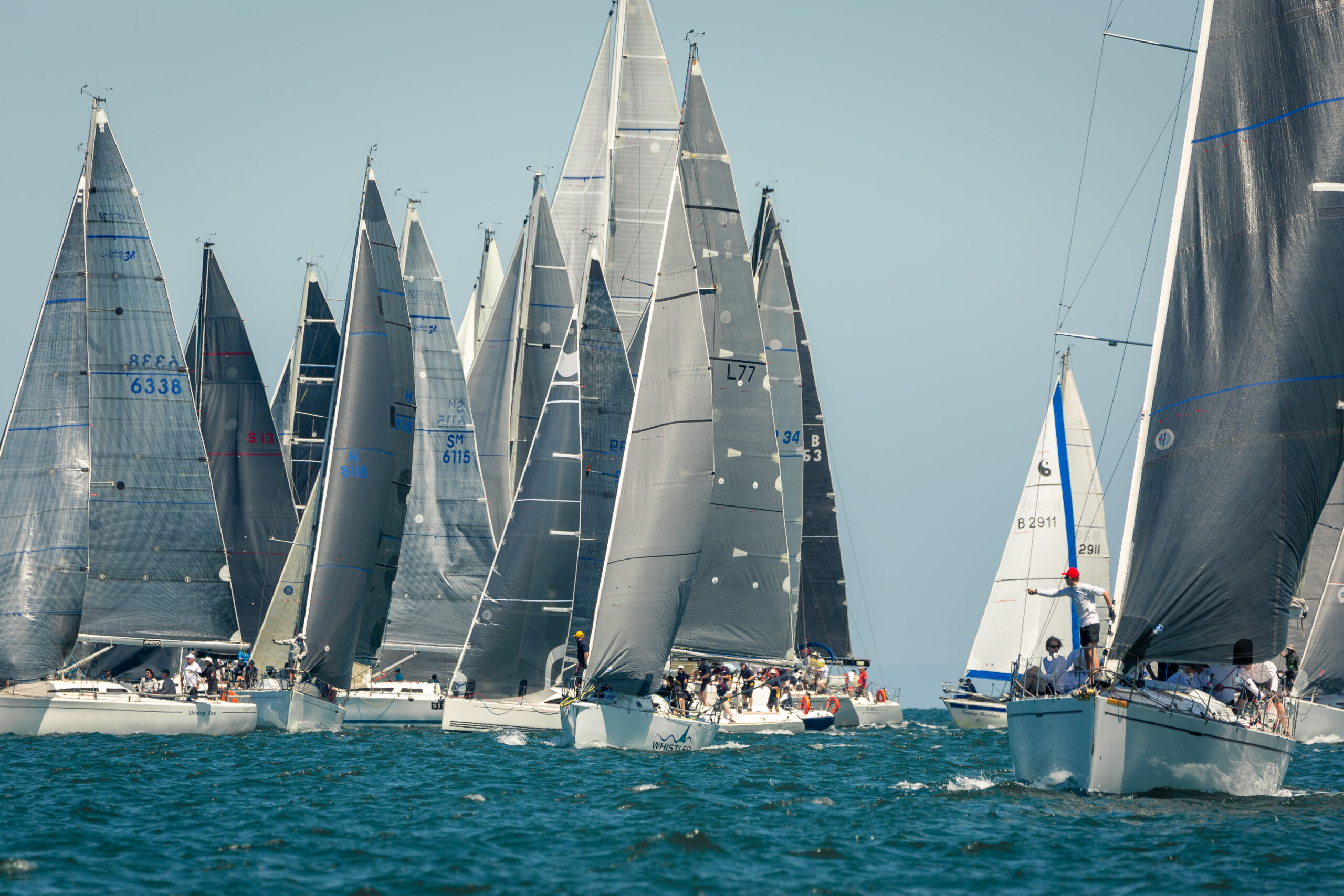 Victoria’s yacht racing community will be out in force on Boxing Day for the Cock of the Bay yacht race.

After a year of not sailing and in fact not even being able to visit the bay, or your boat, this is the ultimate blow out.

The Ocean Racing Club of Victoria’s (ORCV) Race Director Jeremy Walton commented, “There is no better place to be on Boxing Day than on the start line at the Cock of the Bay race.”

The start from Port Melbourne at 10:30 am on Boxing Day morning is always a colourful sight and, with a fleet of 91 yachts, this Boxing Day will be a spectacle not to be missed. Although the race is a significant test with a 34 nautical mile course to be navigated before the finish at Blairgowrie’ the start is always hotly contested.

The course is a spectator bonanza as it hugs the contours of the bay in its early stages, providing excellent viewing opportunities for spectators from Port Melbourne to Sandringham before heading further offshore.

The race plays a major role as the feeder race for the ocean races to Tasmania, the Melbourne to Hobart and the Melbourne to Devonport as well as the popular Petersville Regatta run by Blairgowrie Yacht Squadron.

Cock of the Bay has attracted more than 90 entries. With a fleet this size, the contests for both line and handicap honours are fierce.  As always, the weather is a major factor and current forecasts have been predicting a southerly wind with strength of 15 – 20 knots.

Most crews are rusty from the long downtime and will have to work, blowing out any Christmas day cobwebs as they pick their tactics for the long haul down the Bay. Navigators will be judged by the course they set in the second part of the race as they will be on the wind all day with the crew on the rail in cool conditions.

A challenge to the race record is unlikely with the current weather forecasts but Line Honours will be closely contested.  NSW import Original Sin a Reichel Pugh Ccr 50, has slipped into Port Phillip Bay ready to challenge local talent, Bryan Dorman’s CNB 60 Bordeaux, Journey with its slick and experienced crew and Robert Green’s Pacific 50 Dream.

Original Sin is owned by Ray Semmens but skippered by Leigh Dorrington, ‘Dorro’, while Semmens is a Tootgarook local, Dorrington a Beaumaris boy, left Victoria in 1992 and now calls Port Macquarie home. Original Sin has arrived from Sydney after a major refit that, like everything, was slowed by the COVID situation.  Dorrington has an extensive sailing pedigree including as Australian coach to the three-man Soling class at both the 1984 Los Angeles and the 1988 Seoul Olympics.

Tonight, Dorrington said, “The weather conditions should be perfect for us and I can tell you we will be sailing on the best piece of sailing water in the world.  Port Phillip Bay has so much space and it’s good to be home.”

With some crew flying in from Sydney, Dorrington has also enrolled several experienced Melbourne yachties. “We aim to do as well as we can with the new crew, shake the boat down and have some fun. This is our first real hit out because of COVID and from here we will do the Petersville Regatta and then onto Geelong.”

Dorrington admits that, given the right weather conditions, Dorman’s Bordeaux 60 Journey could be ‘hard to hang on to with its superior water line length. But the real threat, if it makes it to the start line, is the new Scarlet Runner it will be very hard to beat.’

Rob Date’s new Scarlet Runner, Scarlet Runner 13, certainly looks intimidating with its solid black hull the Carkeek 43 is all class and carbon fibre, water ballast and new racing sails.  It is by no means a certainty to make it to the start line and even then Date says, “This would be a shake down race, I’m not sure we can be ready in time.”

The Carkeek 43 is specifically designed as a Fast 40+ and has delivered outstanding results on the super competitive European circuit.  Designed by Shaun Carkeek and built in Melbourne by Composite Constructions, Date said, “We want to get ready to win the 50th Anniversary Melbourne to Hobart Westcoaster next year. We think this is the boat to do it in.  We just want to do more local ocean racing from Melbourne.”

Date has always built young and effective crews, with high levels of commitment and loyalty. So even with a new boat, if they are on the line, then watch out for them.

For sheer consistency and professional performance, it is hard to go past John Paterson’s Farr 45 Rush.  While its smaller size and added age do not immediately recommend it, on its day they provide formidable opposition.

Like trying to pick a Melbourne Cup winner, trying to pick a handicap winner is almost impossible.  So many of these crews bring a wealth of experience and determination to a race that will test the fitness of all on board as they bash into the expected southerly.  Xpresso, with Ari Abrahams on board showed their capabilities last year. Tevake II, flying the flag for Hobsons Bay, are a well-oiled machine and the excellently sailed Archambault 35 Archie with Jeff Sloan at the helm can never be discounted.

Look out for the First 40s, led out by Mike Welsh’s Wicked, including Niche, Bushranger, and Storm, this group are all accomplished sailors with the experience to make good tactical decisions and each armed with knowledge of the other’s strengths and weaknesses.

The 91 crews will all revel in the opportunity to enjoy their sport, sail hard on the water and enjoy each other’s camaraderie after the finish once again.