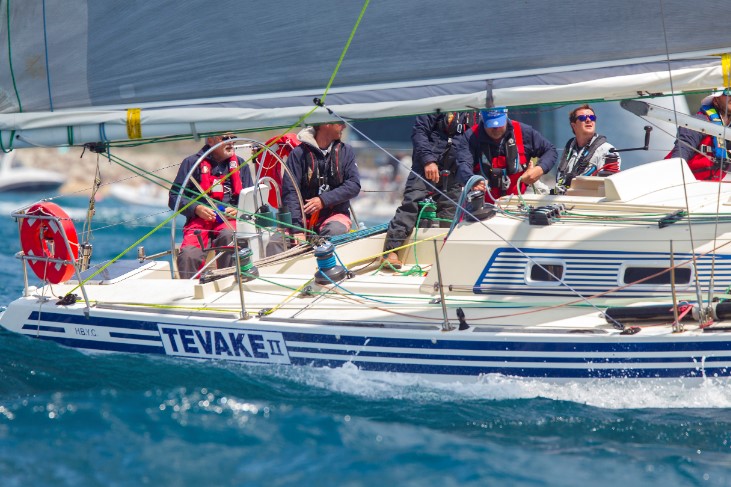 Guillaume Leroux’s Class 40 Lord Jiminy led the ORCV Melbourne to Hobart Race fleet out of Port Phillip Bay yesterday but over night she has been challenged by Douglas Lithgow’s Archambault 40 Soiree Bleu. At 9am, the two boats were within sight of each other with 370nm still to sail.

Conditions are currently perfect for a run down Tasmania’s west coast, with moderate north-westerlies allowing the crews to fly their downwind sails.

Further back in the fleet, Lisa Blair and Jackie Parry are the sole double-handed entry in this year’s race and are experiencing light winds which are hampering their heavy boat’s progress. At 9am they were located to the east of the rhumbline (the shortest direct route) and still had 400nm to sail.

The battle for overall honours is fascinating, with Soiree Bleu leading the third boat on the water, Archie, under the AMS handicapping system.

Meanwhile, in the Melbourne to Devonport Race, the fleet is struggling in very light airs. Angus Fletcher’s Tevake II leads the race for line honours and she has completed more than half the distance, leaving just 73.4nm to go. But they could be 73.4 very slow nautical miles with the forecast showing winds below 8 knots and dropping to as low as 3 knots at times.

After yesterday’s start, Scott Robinson took How Bizarre on a long tack to the west, away from the rest of the fleet. The tactic worked and this morning the Rp36 was in second position, 14nm behind the leader. But significantly she was leading all three handicap divisions – AMS, IRC and PHS.

The mark of an ocean racer is how well he or she handles the light conditions and all crews will be put to the test over the next 24 hours. Navigators will be trying to place their yachts in the right position to get the next decent breeze – and sometimes that will come down more to good luck than good judgement.