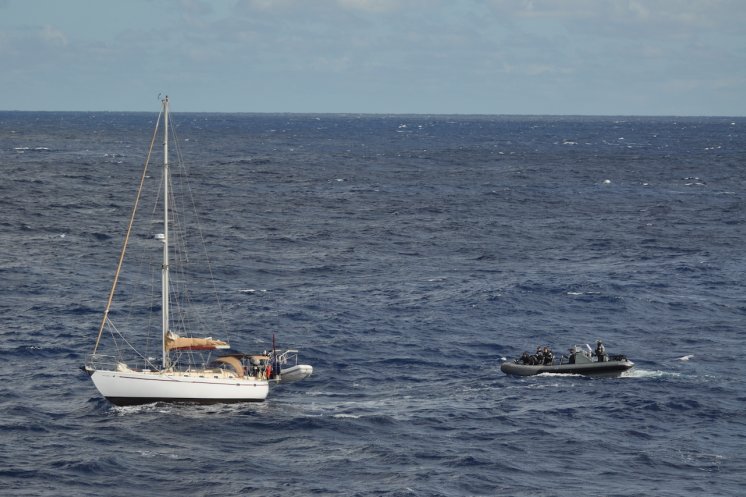 HMAS Melbourne has rescued sailors in distress off the Queensland coast, towing their stricken yacht to safety.

Transiting from Sydney to Cairns, the ship was coincidentally conducting a simulated rescue operation of a yacht in distress whilst responding to multiple damage control incidents, when at 11:50am, a civilian yacht made a radio distress call.

Arriving on the scene some 60 minutes after the initial call, Melbourne deployed its boarding party along with medical and engineering sailors to assess the situation and render necessary aid.

Having provided medical assistance to the Master, and unsuccessfully attempting to make repairs to the vessel's steering gear system,Skylark III  was eventually taken under tow by Melbourne’s sea boat towards the Port of Bundaberg.

Commanding Officer Melbourne Commander Charles Bourne said ensuring the safety of life at sea is paramount for all mariners.

“Our ability to change footing and respond to this situation only demonstrates the versatility and flexibility of the Royal Australian Navy,” he said.

“Melbourne’s rapid response to this situation highlights the presence of the Australian Defence Force in the north and that we remain ready to respond to contingencies in the region.”

Melbourne was enroute to Cairns and preparing to participate in the bilateral high-end war fighting Exercise TALISMAN SABRE.

TALISMAN SABRE 17 consists of multiple air, land and maritime forces from Australia and the US and runs throughout July.