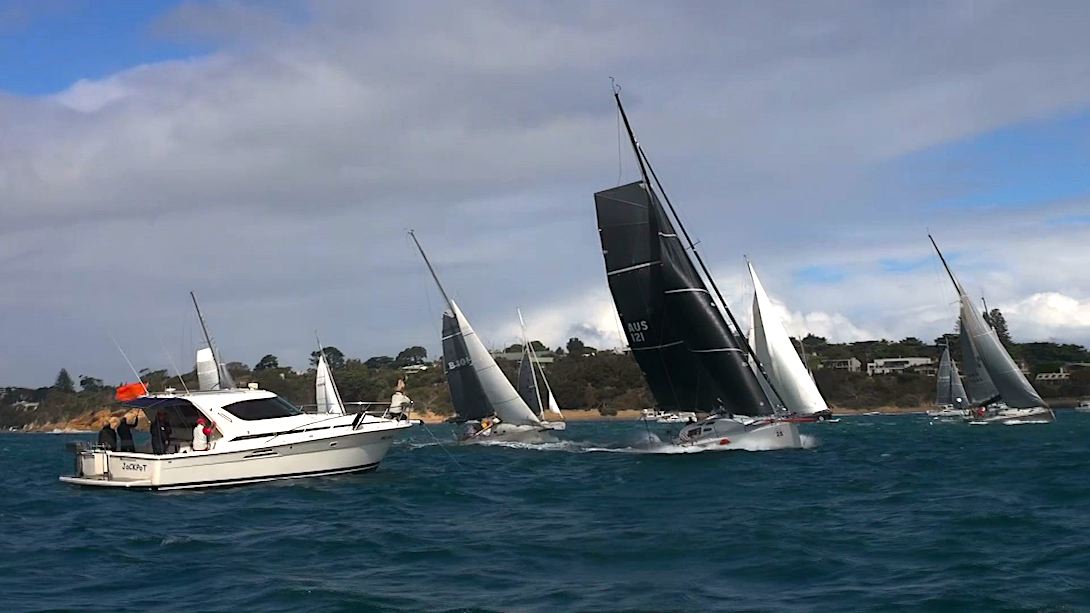 Weather has played a major role in the Sundance Marine Melbourne Osaka Cup this time around. Two out of three starts so far have had to be postponed until the following day because of strong wind.

Having had a day of R&R at Blairgowrie Yacht Squadron on what was to be their start day, all of our competitors in the main fleet were eager to get going by the time Monday came around. The wind had blown hard all night but was forecast to settle by the scheduled start time of 3pm. Following the weather briefing at 9am, one by one crews said their goodbyes and set off down to the start line at Portsea. Conditions were still varied, with quite strong south westerly winds and rain showers moving in from Bass Strait.

With plenty of time on their hands, some crews decided to take it easy, while others tested out sail combinations around the start line. Not that long before the scheduled start, a further delay of 30 minutes was suddenly announced due to shipping traffic traversing the Heads.

But in due course the AP flag came down and the starting sequence was under way. The wind had remained quite fresh and so it was a rapid start for all. Nexba went across the starting line first and remained out in front as the fleet ran down to the Heads.

Our footage in this clip gives you just a taste of the excitement that could be felt out on the water for the start of the 5,500 NM journey from Melbourne to Osaka. We wish them all a safe journey.