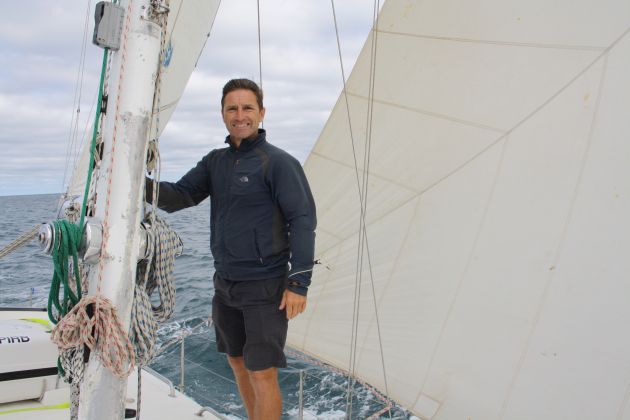 The Golden Globe Race 2018, timed to celebrate 100 years since Robin Knox-Johnston became the first man to sail solo, non-stop and unassisted around the world, starts in Plymouth in just over a year.

To date there are three Australians who have entered:

The 48-year-old fireman from Perth, West Australia is an adventurer at heart, having completed his third assent of Mount Everest last year. He is currently in Nepal guiding a group up Island Peak Mountain. The former SAS Soldier has bought Don McIntyre's Tradewind 35 Silver Heels to do the GGR and plans to sail her around the top of Australia from Sydney to Perth, a distance of about 6000 miles, to refit her before shipping the boat to the UK in January 2018 ready for the start. In between, he has one more Everest climb planned early in 2018. “I'll be going up 29,000ft to the highest point on the globe, then sailing 29,000 miles around it.” He says. Quite a challenge.

Mark was 10 years old when Sir Robin Knox-Johnston became the first to complete a non-stop solo circumnavigation and has been passionate about sailing ever since. In 1984, he completed a double solo crossing of the Tasman. When he found out about the 2018 GGR, Mark applied immediately, purchased the Lello 34 class yacht Coconut and deferred plans to compete in the 2018 single-handed Trans Tasman race.
Mark's professional background includes the hydrographic surveying of remote areas in ships, small boats and aircraft. He served in the Royal Australian Navy, commanding three ships and navigating four. He retired as a Commander in 1996. Mark is currently Managing Director of the Fugro LADS Corporation, which conducts hydrographic surveys worldwide.

Mike is a boat builder and former project coordinator for Boatspeed, builders of Dame Ellen Macarthur's record-breaking trimaran B&Q/Castorama, and the Volvo Ocean Race yacht Movistar. Very experienced in hi-tech composite construction, this South African born sailor is using his expertise to create a modern replica of Sir Robin Knox-Johnston's 1968/9 race winner Suhaili. He has utilised the latest CAD design system to first fair the lines of this ERIC design, then laser cut the frames. Construction is taking place in a barn outside his home near Newcastle, NSW and she is now ready to be strip-planked and sheathed in epoxy.
Mike's plan is to compete the hull later this year and have it shipped to Cape Town for fitting out before sailing her to Plymouth for the start.
Visit: https://thepingoproject.wordpress.com/blog/

The Race in numbers