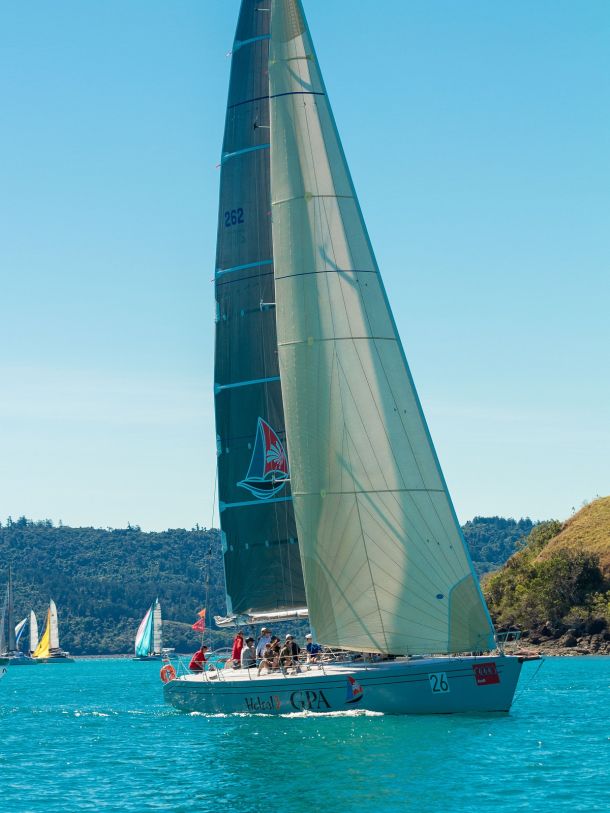 The students were invited by the famous 31 year-old yacht’s co-owner, Dr Paul Mara, who has entered the yacht in the Cruising class as Helsal 3 Northern Exposure.

Mara, a rural doctor in Gundagai, said inviting students had proved successful at past events.

“It’s a great way to build teamwork and show students that living and working in rural Australia does not in any way limit opportunities. It also provides some sailing experience and gives the Wagga Wagga clinical school a national profile,” he said.

Last year the students raced at Hamilton Island under the guidance of Helsal 3’s other owner, Rob Fisher, a veteran of 19 Sydney-Hobart’s. They learned basic sailing skills, but at the same time competed against experienced sailors, gaining confidence and showing how important it was to work together as a crew.

Helsal 3 will also host Wagga Wagga doctors, Charles Oliver, Adrian van der Rijt and John Currie at their next event.  Oliver sailed on Helsal 3 in the 2014 Rolex Sydney Hobart and will do so again this year, when van der Rijt undertakes his maiden Hobart race.

Mara said he hoped to make this an annual event with students and doctors: “Hopefully we can bring back some trophies, but the emphasis is on building teamwork, having fun and giving the Rural Clinical School a national profile,” he said.

There, the crew will race against another famous veteran yacht, Condor. Launched in 1982 for Bermudan Bob Bell, she took line honours in the 1983 and 1986 Sydney Hobart races among her other triumphs, before retiring to Queensland.

Helsal 3 was launched in 1984 as ‘The Office’ for Queenslander, Arthur Bloore. She has twice since been owned by the Fisher family, who has raced her with success throughout the years. She will represent Tasmania, where the Fishers live.

Rob Fisher’s father, Dr Tony Fisher, has owned a long line of Helsals. The most effective took line honours and broke the race record in the 1973 Sydney Hobart.

To be held from 7-14 August, the 26th edition of Airlie Beach Race Week has so far attracted 95 entries across eight classes and numerous divisions, and more are expected before the Close of Entries on 1 August.

Berths are filling fast at Port of Airlie and Abell Point Marina. If you are still planning to enter and/or have not booked your berth, we urge you to act quickly

For entry form and all information, go to: www.abrw.com.au/