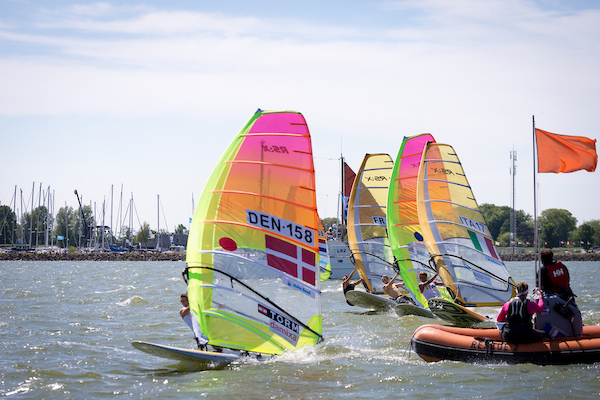 The 33rd edition of the Delta Lloyd Regatta in Medemblik, Holland, was a great success, with a variety of wind conditions, sunny days and exciting final races where medals were finally decided.

Medemblik welcomed a lot of talent, including those preparing for World Championships and World Cups, and some starting new Olympic campaigns. There were also many Olympic Rio sailors who’ve just started their season again.

The organisation behind the Delta Lloyd Regatta tested new formats for the 49er, 49erFX and the RS:X. It was a great success, and made the finals really exciting to watch. After a week of racing in tropical temperatures, we welcome a lot of new winners in 7 different classes.

Exciting new format in RS:X
The new format in the RS:X made the finals really exciting in a ‘winner takes all,’. It is no surprise to see Dorian van Rijsselberghe (NED) winning.

“The new format is maybe a bit unfortunate for the top three of this week, but ended up okay for me. We had tricky conditions, anything could have happened. But it was a really nice week with all sorts of conditions. I’m happy,” the Dutch sailor said.

The quarterfinals started out with really close racing. In the semi-finals it was close racing again for second to sixth places, with van Rijsselberghe leading the fleet. His training partner, Kiran Badloe, didn’t finish in the top six and had to go to the repechage race.

Thrilling finals in 49er
What a thrilling final in the 49er class. The day began with a podium formed of Germany, Portugal and Belgium. The Portuguese Jorge Lima and José Luis Costa were battling for first place, coming second in both the first and second races.

In the third race they only needed to finish two places before the Germans, but unfortunately for them, Tim Fischer and Fabian Graf were still in it to win the gold medal.

“In the first two races we had some trouble with two mistakes. The Portuguese are really experienced, they had a good Medal Race, but we are really happy to win here. It’s our first medal at an international cup,” Fischer said.

Lima: “The first two races were really good for us. We closed the gap with Fischer and Graf. In the last race we had an unlucky cross with some colleagues and lost our spot in the front. We’re not disappointed as this was our first event after the Olympics. We have to find our rhythm again.”

The battle for a third place was exciting as well. After the first race Germans Erik Heil and Thomas Ploessel easily took over the third place from Yannick Lefebvre and Tom Pelsmaekers. A strong start from the Germans, they won the first two Medal Races with a big lead.

The German crew of Tim Fischer and Fabian Graf began the races in first place with Jorge Lima and Jose Luis Costa (POR) in second place. Lefebvre: “We had a good Medal Race, can’t complain about that. Our loss was earlier this week, but we still had a great event.”

Close racing in 49erFX finals
At the beginning of the day the top five was really close. After the first two races, the gap is getting bigger.

The Croatians, Enia Nincevic and Peiar Cupac, went into the final race seven points ahead of Annemiek Bekkering and Jeske Kisters. At this race they manage to take the lead once again and secure their gold medal at this Delta Lloyd Regatta.

Nincevic said: “It was really close racing. If you made one little mistake you could lose everything. It was a hard course as well, great for spectators but difficult for us with many tacks.”

Dutchies Bekkering and Kisters’ only job was to watch the British John Pink and Sophie Ainsworth and with a fourth place in the final race, they secured their silver medal.

“We learned every day this week. Today we had a good second race, the final race was hard for us. We are Very happy with this second place.”

Japanese secure Gold
The Laser Radial raced according to the normal format, a race with double points. Leading with 18 points, the Japanese Manami Doi only had to finish in 9th place to secure the gold medal.

Tension was high when she was racing in the back of the fleet, while her biggest opponent, Marit Bouwmeester, was leading the fleet. Luckily she took 9th place from Barwinska before the finish line to secure Gold.

“I was really nervous and made a lot of mistakes, but finished well enough for the gold, so I’m happy.”

Second place is for Bouwmeester. She began the week not completely fit, but made a great comeback in the last two days. She started the Medal Race in second place and had to finish in front of the fleet to secure second place and even take a shot at gold.

“The last two days have been pain-free thanks to my great team. They were really great at taking care of me. Thanks to them, I’m at full speed again with this silver medal as a result,” Bouwmeester said. Third was Italian Silvia Zennaro.

Regatta queen Pascoe wins 2.4mR
In the 2.4mR, we had 10 races this week. The overall winner of the 10 races is British Megan Pascoe. “According to the scores, I had to win here, but Carol Dugdale was getting better and better.” Pascoe managed to keep her lead until the last day, and Dugdale (GBR) ends up in the second place. Dutch Dirk Jan Broertjes secures his third place with a consistent regatta.

Medal Races
The first Medal Races were raced on Friday in the 470 and Laser. The 470 Medal Race was exciting right to the end, but the Russians Pavel Sozykin and Denis Gribanov were unbeatable and managed to keep their lead to secure gold.

Elliot Hanson won in the Laser after a fifth place at the Medal Race. “It was a real close race, I was happy to get back into the race. First lap was a bit shaky, but I had a good last two laps with a good speed,” he said.