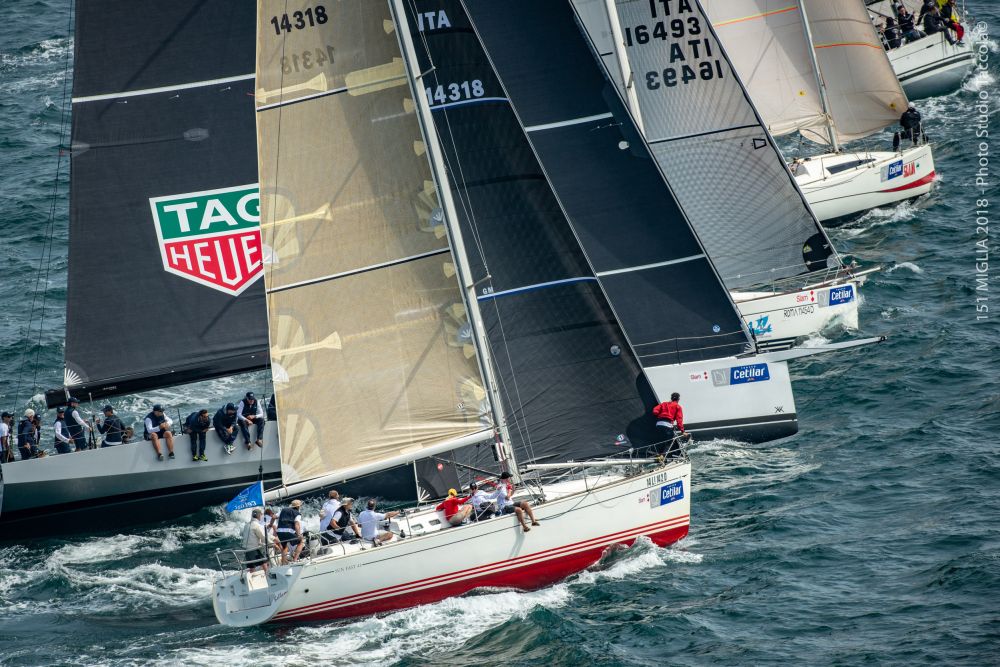 SuperNikka on her way to pulling the trigger too soon in today's impressive start. Photo:Studio Taccola.

This year, the ninth edition of the 151 Miglia-Trofeo Cetilar has attracted almost 200 boats, of which 20 are maxi boats of more than 60ft LOA. The 151 Miglia-Trofeo Cetilar doubles as the third event of the International Maxi Association’s 2017-18 Mediterranean Maxi Offshore Challenge. This started last autumn with the Rolex Middle Sea Race and continued in mid-May with the Regatta dei Tre Golfi, the prologue to Rolex Capri Sailing Week.

Starting from Livorno, the 151 Miglia-Trofeo Cetilar takes the fleet on a tour of the Tuscan archipelago – initially north to a turning mark off Marina di Pisa, then southwest to the Giraglia rock off the northernmost tip of Corsica. It then heads southeast around the bottom of Elba and on to the Formiche di Grosseto rocks (located some 13 miles off Porto Santo Stefano) before hooking north again for the short final leg towards the finish in Punta Ala. As its name implies, the race’s distance is around 151 miles.

Scratch boat in this year’s bumper fleet is Nicola Paoleschi’s Laurie Davidson 69 Pendragon VI – line honours winner in three of the last four races. She will be chased by Miguel Matias Galluccio’s Vera, formerly one of Italy’s most famous maxis – Pier Luigi Loro Piana’s My Song, the IRC winner of this race in 2016. From Argentina, Galluccio has owned the boat for two years now, retaining its elegant dark blue hull colour. This is his first attempt at the 151 Miglia-Trofeo Cetilar.

The Baltic 78 Lupa of the Sea is also under new ownership. Jeremy Pilkington’s former Lupa of London was sold last October to Fabio Cannavale. While Pilkington made considerable upgrades to make Lupa more competitive as a race boat, Cannavale admits that he prefers cruising and has just had refitted her in line with this. However he felt obliged to try his hand in the 151 Miglia-Trofeo Cetilar: “This boat is fantastic. She came with a container full of sails and I used to race when I was at university. We are racing with a completely amateur crew and this may be the only race we do.”

This year SuperNikka is a favourite for both taking line honours as well as the overall prize under IRC corrected time. “I hope that this will be the edition of records because of the number of boats taking part and the routing for the race is showing good numbers,” says Lacorte. “The record is around 16 hours and the routing shows 17 hours or less.” The present race record is 16 hours 25 minutes and 23 seconds, set by Claudio Uberti’s Ourdream in 2011.

Lacorte’s personal hopes of breaking the race record took a small step back when SuperNikka was the only boat to be declared OCS in the IRC fleet’s single start.

This year’s race has a reasonable forecast which Lacorte reckoned would favour the canting keel Lupa of the Seas among the maxi fleet. The wind is initially out of the west and around 15-18 knots although at the 1600 CEST start it was closer to 10-12. If the forecast holds true then after rounding the Giraglia rock, the boats could find themselves stuck in the lee of mountainous Corsica. As former America’s Cup helmsman Paolo Cian, part of the afterguard on board Aldo Parisotto’s Mylius 65 Oscar3, warned: “We should arrive on starboard without any big lulls, but we will have some bubbles close to the shore.”

The wind is due to veer into the north overnight and this will add the further complication of a lee to the south of Elba. The forecast is also showing a substantial hole in the wind between Elba and the east coast of Corsica. The race looks set to end with a beat from Formiche di Grosseto up to the Punta Ala finish.

According to Tommaso Chieffi, tactician on SuperNikka, their ETA into Punta will be around breakfast time tomorrow “at around 0730. Vera or Pendragon are the scratch boats. They will gain initially, but we might recover some on the way back.”

At 1900 CEST local time, Vera was leading on the water from Pendragon VI with SuperNikka having overhauled Carlo A. Puri Negri’s Farr 70 Atalanta II – the frontrunners making 11-12 knots as they approached the half way point between Pisa and Giraglia.

With the conditions indicating that the fastest boats could threaten the record, one of the biggest questions crews are contemplating is to run a watch system (as they certainly would on a slower race) or to stay awake for the duration?