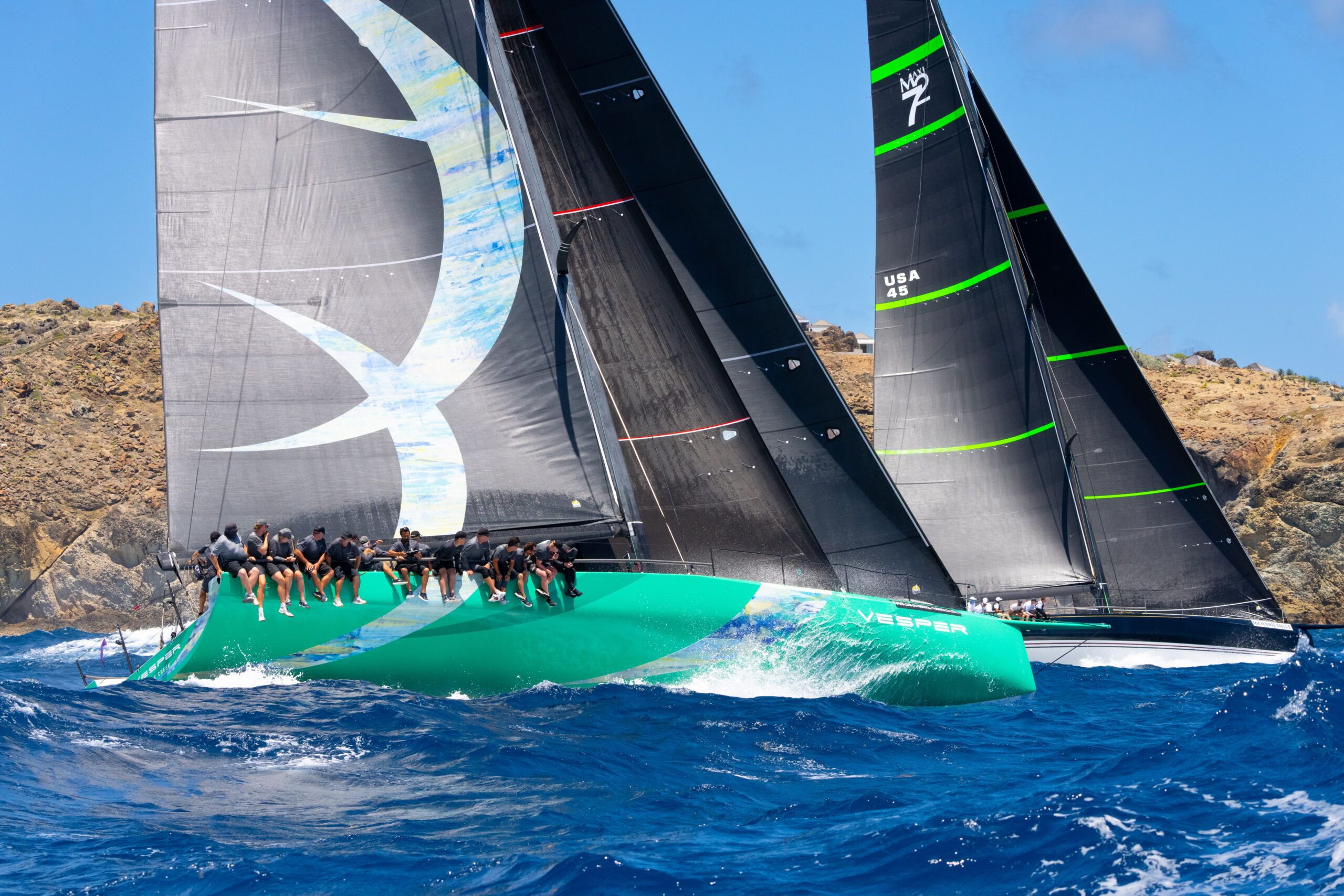 However the elements were no less brutal with the Maxi class sent off on a long 47 mile course, a first beat then exposing them to the full brunt of the Atlantic swell on the windward side of St Barts. This was followed by a long broad reach across to the island of Tintamarre off the coast of St Maarten and then on to a weaving course back along the south side of St Barts towards the finish off the French Caribbean paradise island’s capital Gustavia.

For a third day running the winner in the Maxi class under IRC corrected time was Jim Swartz’s peppermint-coloured Judel Vrolijk 72 Vesper. Once again straight out of the start she and arch-rival Hap Fauth’s Botin Partners 74 Bella Mente were tacking on one another and generally beating each other up – inevitable given the large number of America’s Cup winners on board each boat.

Two legends have joined Vesper this year in Kiwi main and jib sheet trimmers Warwick Fleury and Simon Daubney, who were part of Russell Coutt’s core crew that won the America’s Cup for Team New Zealand in 1995 and were repeatedly part of AC winning crews through to Alinghi’s successful defence in 2007. Surprisingly Fleury and Daubney last sailed together 12 years ago during the 2010 America’s Cup.

Daubney is also enjoying the nip and tuck with Bella Mente. This came to a head today approaching the bottom mark at Tintamarre. “We had a gybing duel – we were coming at them on starboard, they gybed on top of us, we gybed back and then we came back in and they thought they could cross us and then they couldn’t.”

Bella Mente was forced to carry out a penalty turn only to recover ground again on the subsequent reaching leg before they both turned upwind when Vesper extended away. From being 30 seconds behind they overtook to win by three and a half minutes on the water, translating into almost 10 minutes under IRC corrected time.

On board Bella Mente, tactician Terry Hutchinson said they are painfully aware of their present short falls. Part of this is that the older generation Vesper is simply in her element in St Barts’ bigger conditions but as he explained, “We are still dealing with a lot of human error. We only got the boat on Saturday night so, today is day four. They are hard boats to sail and we haven’t raced the boat since September.

“We have twice led Vesper around the first top mark but not just capitalised either time. A poor craftsman blames his tools – I generally try and look in the mirror when I’m not winning and it is a team mirror this time: All of us collectively just need to do our jobs a little bit better.”

It was a case of ‘Groundhog Day’ too between the other maxis racing in the CSA 3 class, where it was once again American Jim Madden’s well sailed Stark Raving Mad VII that prevailed. Both they and their principal rival Italian Luigi Sala’s Vismara 62 Yoru had start line incidents. Madden’s Swan 601 was barged out and was forced to restart, losing around a minute out of the blocks, while Yoru was over early and scored OCS.

However up the first beat Stark Raving Mad VII tacked into pressure and then stayed ahead for the remainder of the race. “They [Yoru] are faster than us downwind and were slowly catching us up and then they had a problem and we didn’t see them again. I know what that feels like – I feel very sorry for them,” said Madden. Yoru suffered a big spinnaker wrap which they took time to resolve.

Despite CSA 3’s slightly shorter course taking them into the Atlantic, where Madden reckoned that the swell was around 8ft, he enjoyed it. “It was challenging. It was a little more windy than the forecast said so you were right between the A4 and A2 and the J3 and J2. We erred towards the beefier sails. The worst part was getting around the point [windward end of St Barts] but then you could crack off quite quickly. The islands are beautiful.”

Tonight the crews celebrate at the Coachella crew party on a nearby beach before tomorrow’s well deserved layday where the party moves on the Nikki Beach beach club on the opposite side of the island from Gustavia. “We are looking forward to a day off tomorrow,” confided Madden.

Racing continues on Friday and concludes on Saturday.