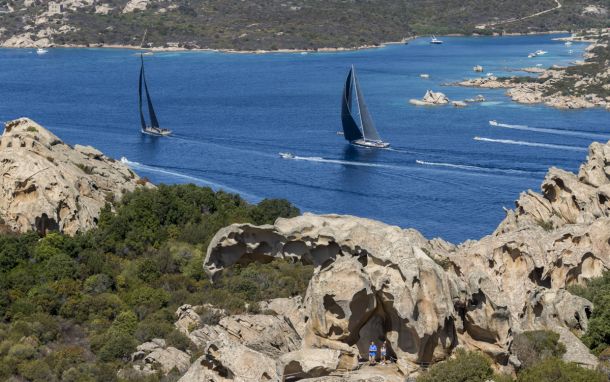 Porto Cervo, Italy. 10 September 2015. With just one more race day left in the 26th edition of the Maxi Yacht Rolex Cup, all will be decided for four of the five competing divisions in Saturday's final showdown. All forty participating yachts completed coastal courses today which allowed Bella Mente (Maxi 72) and Grande Orazio Pioneer Investments (Maxi RC) to move to the top of their respective divisions while Open Season (Wally), Shirlaf (Maxi RC/SOT) and Supernikka (Maxi Racing) held firm in their top positions. Owners and crews participating in the event, organized by the Yacht Club Costa Smeralda and the International Maxi Association, will have the chance to rest and recuperate during tomorrow's lay day before everything comes down to the crunch on Saturday.

The light air forecast for tomorrow, Friday 11th September, prompted the Race Committee to move the lay day back in order to get a fourth race day in today. While a promising 10 knot north-north easterly breeze accompanied the 40 competing yachts on the starting line, the wind died out later in the day leaving some boats struggling to cross a foreshortened finishing line.

A heated battle continues for the World Championship in the Maxi 72 class which has seen four leadership changes over four days. Only two points separate the top three boats and with the possibility of several windward-leeward races being held on Saturday, all teams will need to bring their top performances on Saturday. Second place today and a discard left Hap Fauth's Bella Mente in first place overall today ahead of yesterday's leader Robertissima and Dieter Schön's Momo.

While Marco Vogele's Inoui is now assured victory in the Supermaxi category, the field is still open in the remaining divisions. Open Season, who until today had a perfect scoreline of five victories over five races run, scored a fifth place today and saw a discard come into play which leaves her open to competition from J One and Magic Carpet Cubed.

In the Mini Maxi RC/SOT division the Swan 65 Shirlaf just managed to hang onto the overall leadership with a sixth place in today's race but is now on equal points with H20 and third-placed Wallyno is just a further two points behind. Among the Mini Maxi Racers there was no change on the provisional podium with Supernikka, Caro and Spectre holding firm, but with only three points between them all is yet to play for.

The Maxi division will also elect its overall winner on Saturday. Both Grande Orazio and Windfall – two Southern Wind yachts – are fighting tooth and nail for the Rolex prize and are now sitting on equal points with Italy's Grande Orazio just a sliver ahead thanks to a bullet in today's race.

After last night's IMA dinner, owners will once again be regaled at the Rolex Gala Dinner this evening while all participants will attend the Rolex Party on Friday evening.