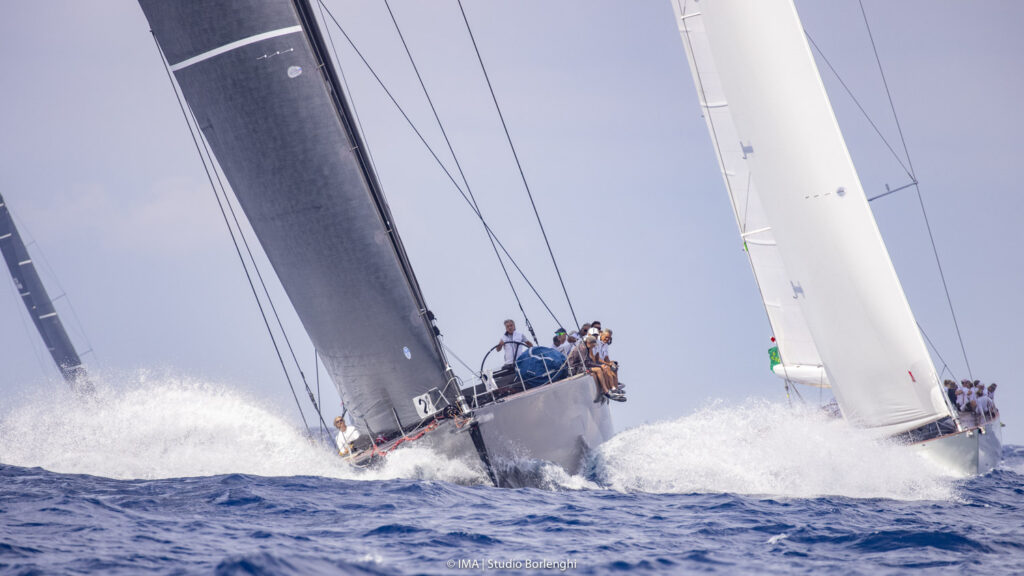 There was a second consecutive win in Mini Maxi 2 for Mylius Yacht's President Luciano Gandini and his Mylius 80 Twin Soul B. Pic - IMA / Studio Borlenghi 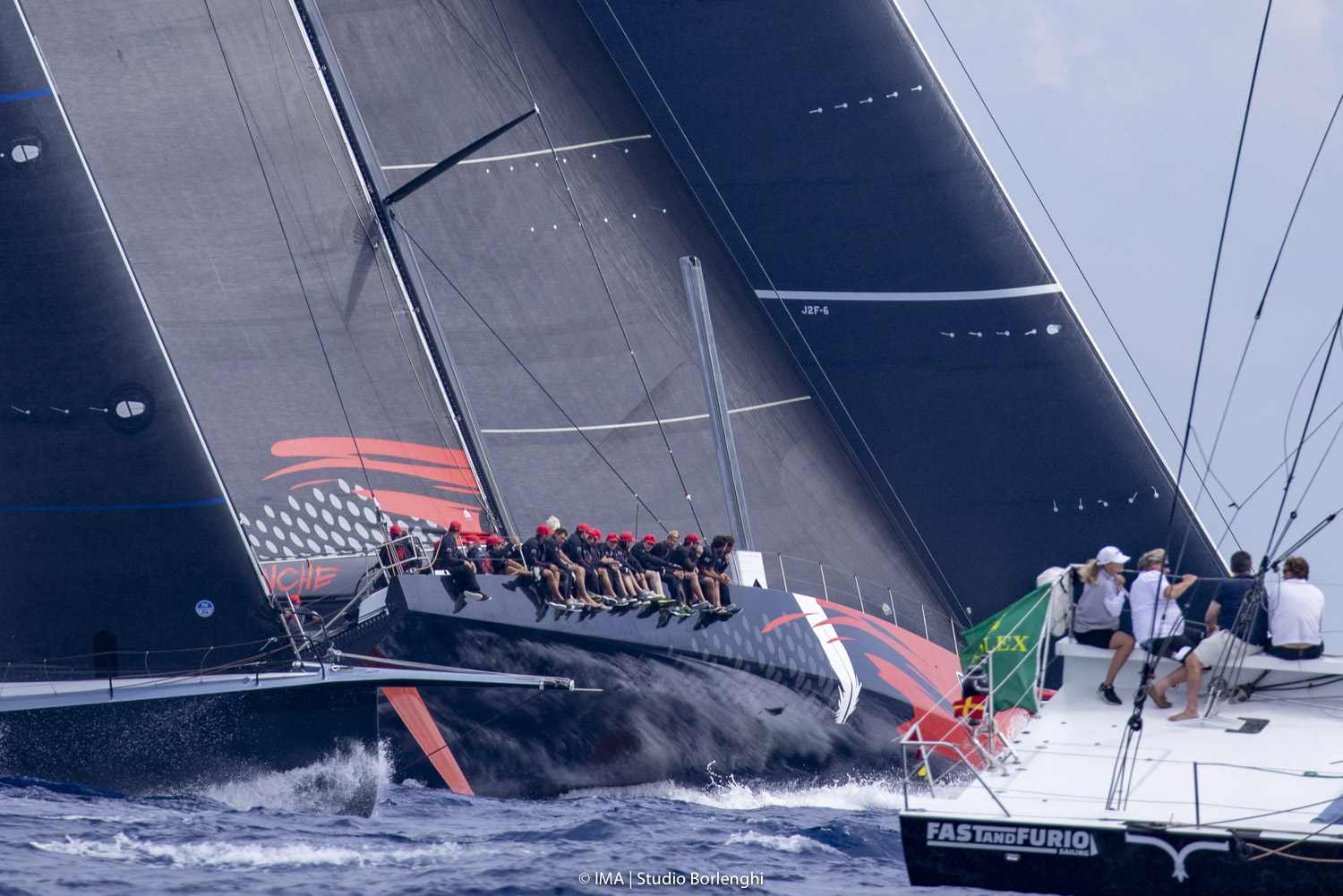 Comanche in the thick of the Maxi class action. Pic - IMA / Studio Borlenghi 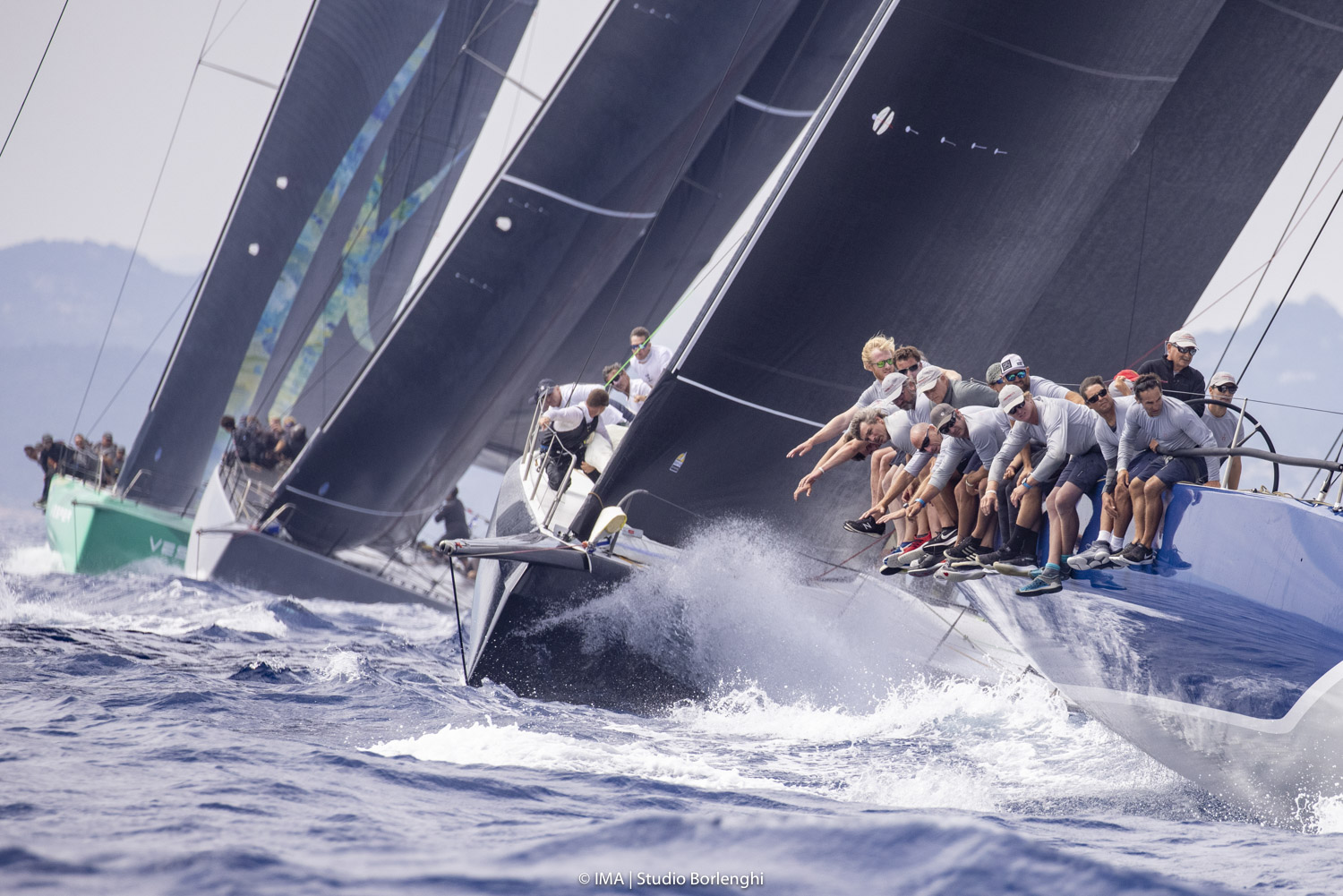 Proteus off to a great start in the first windward-leeward race of the day. Pic IMA / Studio Borlenghi 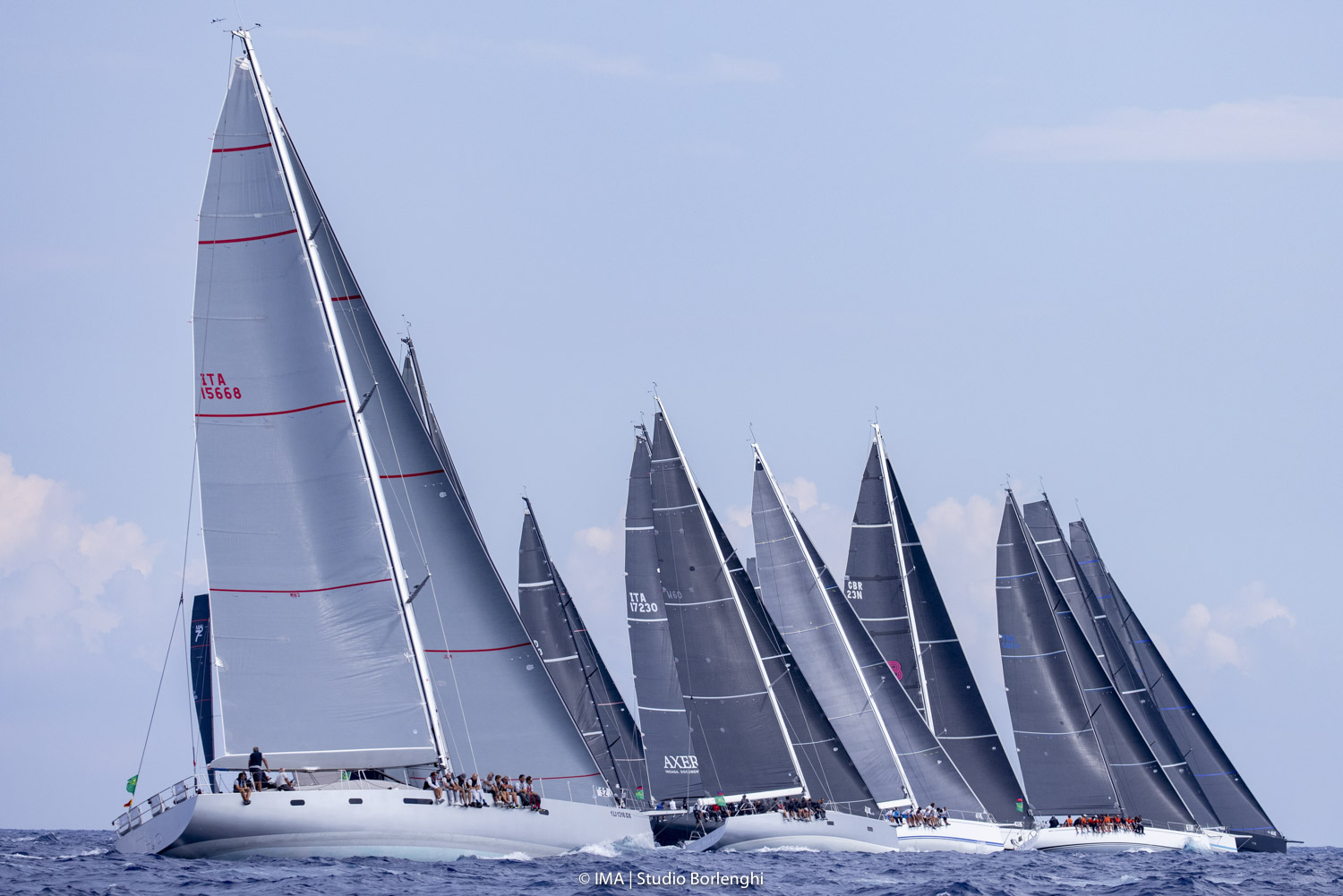 Today, after three relatively light races, the wind was knocking on the door of 20 knots for the penultimate day of competition at the Maxi Yacht Rolex Cup.

This was the most breeze seen all week and the reason the event had its layday postponed until tomorrow.

The south-easterly breeze, combined with a lumpy sea state sadly took its toll on the leader of the Maxi class. With a bang that echoed around Bomb Alley, the top of the carbon fibre forestay broke on Irvine Laidlaw’s Highland Fling XI close to the top of the course. A rapid scrabble by the crew saved the now unsupported rig. They then coaxed their dark green Reichel/Pugh 82 back to port.

The team’s intention now is to see if they can install a new forestay in time for racing on Saturday, but this involves sophisticated state of the art technology – fitting the carbon fibre stay and then ‘cooking it’ in situ. The incident was a huge shame for Laidlaw’s team, dropping them to fourth overall in the Maxi class.

“It was pretty good,” said Owen Jones of their performance today. “We were keen to be very close to our immediate competitor [Galateia], so being second to them was just fine.” He added that the marginally newer Galateia often has the edge on them in windier conditions and downwind. This could bode well for Saturday’s final race, that is again looking light.

There was also upset, although less disastrous, in the Super Maxi class of 100+fts where none of the other competitors have managed to usurp the two J Class yachts from the top of the standings. Today, Topaz was just close enough to Velsheda’s transom to win on corrected time for the first time this week, but by just 16 seconds – the closest finish across all classes so far this week.

“That’s made my day!” said Topaz’s beaming helmsman Peter Holmberg. “We had some winch issues before the start so we were full panic and didn’t have a chance to fight them at the start. I have a knife [Topaz], they have a gun [Velsheda] – so I have to be close to them to do any damage. Our strategy was just to stay close and we kept coming into them. As soon as we are downwind we do have a little bit on them. So we fought for position on them and got it and led around and then on to the finish they just reeled us in.”

Velsheda passed them but on the finish line the lower rated Topaz was literally 10ft behind. “We get closer with these two 180 tonne boats than I get in my Finn!” quipped Holmberg. “We are riding each other’s stern with very little control. It is a scary, scary situation. We were locked together all day. It is great racing, frustrating, but they are a great competitor to have. They push us hard, but our team deserved to win today.”

In the Mini Maxi 2 class Mylius Yachts’ President Luciano Gandini has got a taste for victory. Having scored a bullet under IRC corrected time yesterday, he repeated this today aboard his Mylius 80 Twin Soul B. His second victory has caused him to close to within four points of the leader, Alessandro Del Bono’s ILC maxi Capricorno, who was second today, with Vincenzo Addessi’s Mylius 18E35 Frà Diavolo third for a second day running.

The only boat to date still maintaining a perfect score is Canadian Terry Hui’s Wally 77 Lyra. Thanks to this stand-out performance Lyra is now unbeatable in Mini Maxi 3 with Luca Scoppa’s Dehler 60 Blue Oyster seven points astern of her in the six boat fleet. However there is a three way fight for the remaining podium positions. Today Riccardo de Michele’s Vallicelli 78 H2O scored her second consecutive second, leaving her third overall, a point behind of Blue Oyster on the Mini Maxi 3 leader board going into the final day.

After his H20 finished fourth on both the light first two days, De Michele said his boat preferred today’s conditions. “With 10-12 knots, we can try to race together, but under 10 [knots] it is not possible because she [Lyra] is too fast.”

Out at sea, it was barely noticeable between the former Maxi 72s within the Mini Maxi 1 fleet as they returned to their natural habitat of windward-leewards that they had been on a two year enforced break due to the pandemic.

Two races were held today and, posting a 1-2 in these, George Sakellaris’ Judel-Vrolijk-designed Proteus was the top scorer, just ahead of Jim Swartz’s Vesper with a 3-1. Disappointing results for class leader, Dario Ferrari’s Cannonball means that the top four boats in Mini Maxi 1 are now separated by just three points overall going into the final day.

“We were lucky – the wind was the best of the week and Proteus likes these conditions and I love driving in it,” said Sakellaris, who shared helming duties today with his daughter Christina, a keen Laser Radial sailor. “It was a great day with great competition. It was down to who got the first shift and we were leading both races. “Last race – they [Vesper] were inside of us on the shift. This is a great venue and [this event has] great organisation.” In the second race they finished second despite having to contend with a broken winch and a pitman with damaged ribs.

“I think the old girl likes a bit of breeze,” said Campbell Field, navigating Proteus for the first time. “We saw an average of 14-15 knots of wind, but there were a couple of light spots. In the first race we saw 17-18s so it was really nice. Towards the end of the second race we got caught in a light patch as the chop started to build. It made it hard on George but it was a beautiful day sailing.

“In the first race we were handed a gift – we were called OCS, which forced us out to the right. We went straight into a right hand shift which brought us back into the fleet. The 72s are all evenly matched. They are very good fun racing.”

Racing at the Maxi Yacht Rolex Cup will conclude with a final coastal race for all fleets on Saturday.