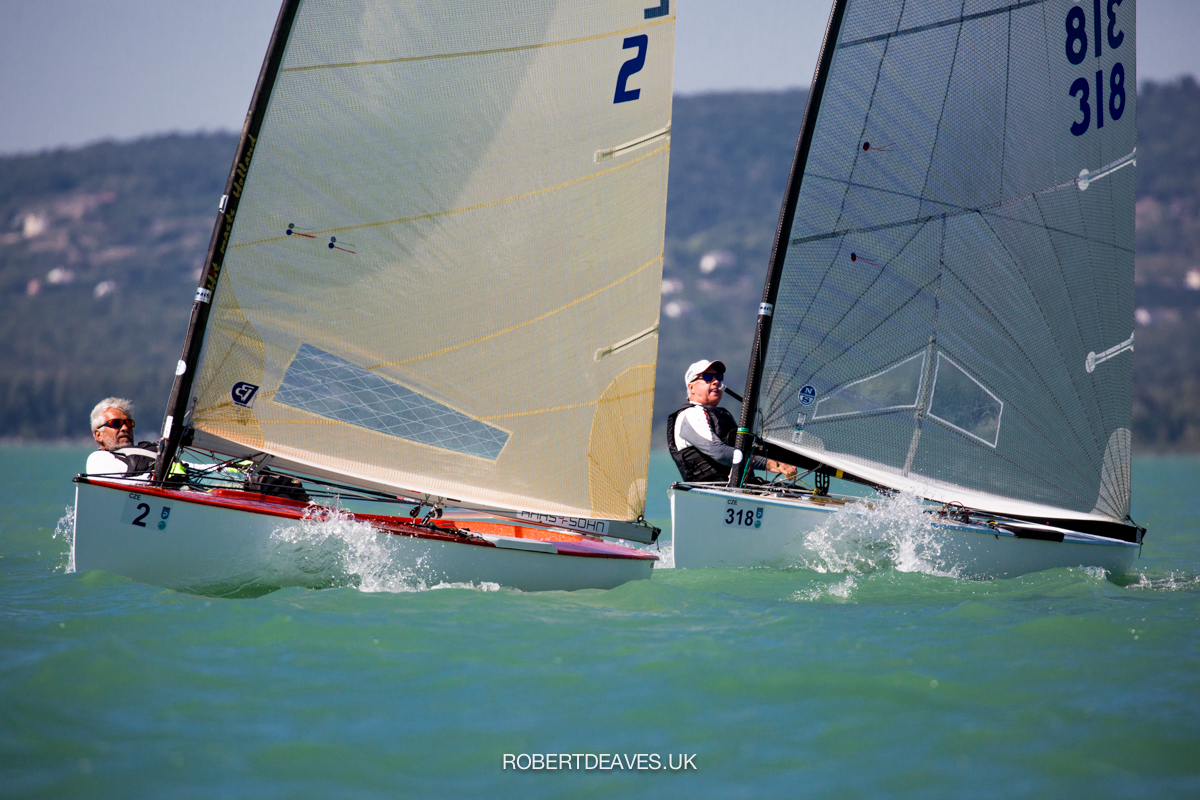 Zdenek Gebhart, from the Czech Republic, continues to lead the Finn European Masters at the Tihanyi Hajós Egylet in Tihany, Hungary after two more races on Thursday.

Akos Lukats, from Hungary, is up to second while Taras Harvrysh, from Ukraine, won the final race to move up to third. The first race was won by an exuberant Botond Berecz on home waters.

The conditions were as challenging as day one, with nothing staying the same for more than one leg. Race three was sailed in a shifty easterly with the course set south of the Tihany peninsula. The fleet split almost evenly across the race area but those on the left made the best of the first beat.

Lukats was the early leader and seemed to have it sown up, but on the second upwind Berecz closed the gap and then passed him downwind to take a very popular win for the home crowd.

The start area for race four was moved across the lake as the wind shifted 100 degrees shortly after race three. It took several attempts to get the fleet away with Ivan Rames, from Czech Republic, setting the pace and leading round the first lap.

However it all went funky on the second beat with the breeze dying out and reappearing in several locations more than once. In the end Harvrysh found pressure out of the middle left to move ahead and lead down to the finish.

2019 Finn European Masters champion, Filipe Silva, from Portugal moves up to eighth overall after a 5, 14.

Silva said, “Tricky conditions and it was hard to understand the race course because the wind was always shifting and the pressure was always coming from different directions. But we managed to get two races done, though the last race was unfortunately abandoned on the last downwind because of lack of wind and shifts and so overall it was really difficult day to be honest.

“But it’s nice sailing in Balaton. The weather is good, though unfortunately the wind is not helping, but tomorrow I think will be better. The club has been fantastic, with really good organization.”

Botond Berecz is the brother of the recent Olympic silver medalist Zsombor Berecz. He described his race win as “the greatest achievement in my sailing life.”

He described his race, “I started at the pin and went to the left side, because in the east wind there is typical wind shift coming from that way. But I needed to be patient because I always tack too early. Under the hill you get lifted up to the mark, so I waited until the real wind came.

“And everything happened as I estimated, and in the downwind the boat is fast.”

He restarted Finn sailing four years ago, after a 30 year hiatus, for the Finn Gold Cup held at Balatonfoldvar in 2017. This is his first event for three years and he is sailing one of his brother’s old boats. “The boat is really fast.”

He draws inspiration from his brother’s Olympic medal, but “I cannot explain how much Zsombi’s medal meant to me and my family.”

With the weather pattern looking set to repeat itself, the start time for Friday has been brought forward to 0900 local time to try and use as much of the morning wind as possible. The championship continues until Saturday.