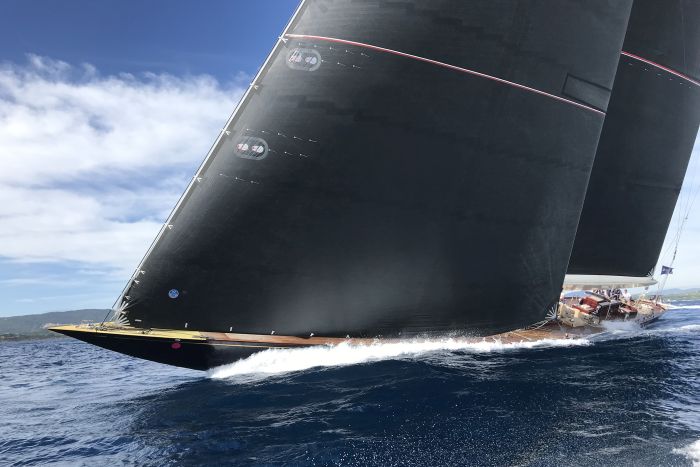 The final day of Les Voiles de Saint Tropez 2019 enabled the maxi teams to get some deciding points on the board after a week that has proved challenging to crews and race officials alike. Saturday’s race was just the third of the regatta after too much or too little wind caused much of the program to be cancelled.

With the support of the International Maxi Association, the Wally and four IRC A maxi classes this week had their own race committee, PRO and even their own race area off Saint-Tropez’ Pampelonne beach.

On the final day the yachts were sent off on a coastal course starting in around 10 knots. However with the gradient and sea breezes fighting there were some tricky holes and transition zones and ultimately the race committee opted to shorten course. Despite the conditions the competitors were pleased to have got in a last race.

Among the IRC A-1 yachts racing for the Loro Piana Trophy, Velsheda's run of bullets came to an end with the Farr 100 Leopard 3 prevailing. A fourth left Ronald de Waal's magnificent J tied on points with George David's Rambler 88, but winning on countback.

Following Topaz’s technical set-back at last month’s Maxi Yacht Rolex Cup, Velsheda was the sole J Class yacht competing this week. Of the final race tactician Tom Dodson said: “We had to finish no more than three places behind Rambler 88, which we did, so we are happy.

“It is not the same as racing against other Js. When you are not beating up on each other like we normally are, you sail against the clock which gives you a better chance on handicap.” De Waal was pleased with his regatta. “He likes to mix it up – he just loves the boat and loves getting on a long leg in steady breeze to see how well he can do it. This week has been good for him and the trimmers to try a few different things,” concluded Dobson.

In IRC A.2 the final race broke the tie for first place with the Swan 82FD Kallima coming out on top of the Swan 80 Umiko.

The hottest competition was in IRC A.3 where going into the final day there was a four-way tie for the top between Luciano Gandini's Mylius 80 Twin Soul B, the Swan 601, Flow, skippered on this occasion by Clay Deutsch, Jean-Pierre Barjon on his sistership Lorna plus International Maxi Association President Benoît de Froidmont on his Wally 60 Wallyño.

Ultimately a bullet in this race for Twin Soul B handed the prize to the Mylius Yachts President. “Winning our category is a big satisfaction for myself and for the crew,” said Gandini. “We had very nice races and I am really pleased with the performance of the boat. Today there was some 8 -9 knots at the start then some 6 knots during the race, during which we put distance between us and the rest of the boats in our class, before the wind died. As President of Mylius Yachts I am proud we had five Mylius yachts racing here at Les Voiles de Saint-Tropez.”

While the Dutch Marten 72 Aragon finished second in the final race, it was Flow that ended up second in class ahead of Wallyño.

“Today’s race was challenging given we went into it tied with three other boats,” said Clay Deutsche, best known for campaigning the Swan 68 Chippewa in the USA. “We felt we’ve sailed pretty well and it’s been a perfect ending to a wonderful week. Les Voiles de Saint-Tropez is one of my favourite regattas in the world: The combination of a magical town; the whole scene ashore is spectacular; the people here are wonderful and the competition on the water is superb. Tonight we are going to party in Saint-Tropez and enjoy our last night here.”

Among the grand prix racers in IRC A.4, Philippe Ligier's Wally 80 Ryokan 2 won the final race by a substantial margin, while Peter Dubens’ Frers 60 Spectre was second. However two bullets earlier in the week was enough to hand victory overall to Jim Swartz and the crew of Vesper (formerly the Rolex Maxi 72 World Champion Momo).

In the Wally class, competing for the BMW Trophy, Lyra, the Wally 77 of Chinese-Canadian owner Terry Hui that continued her winning streak from last month’s Maxi Yacht Rolex Cup. On Saturday Lyra scored her second bullet. “It was difficult winds in St Tropez as always, but that made for an interesting test of the skill of our team,” said Hui. “There were lots of wind holes, but we were able to find wind most of the time and we were able to keep up with boats 20ft longer than us.”

Hui also very much enjoyed the huge spectator and public interest shown both on the water and while they were docked in Saint-Tropez. “This event gives the whole sailing community the chance to integrate with the public, and that serves to inspire the next generation of sailors, which is one of the most important parts about this event. Plus it reminds people to explore the ocean and better protect for the environment – our community has to promote that.”

After David Leuschen’s Galateia won the last race in the Wally class, Sir Lindsay Owen Jones’s Magic Carpet 3 prevailed in the concluding race between the Wallycentos. This was some payback after they had been called OCS and finished last in the previous race, said Magic Carpet’s Jochen Schuemann. “We finished the season on a high and made our owner happy and also the crew felt relieved because we started better and sailed better.”

Concluding the Voiles de Saint-Tropez IMA Secretary General Andrew McIrvine commented: “This was a difficult Les Voiles due to the Mistral writing off Monday and Wednesday. There was plenty of sunshine at least and for the first time, with the help of the IMA, the maxis were divided into classes according to their relative speed, not just on size. This produced good racing and safer starts out on their maxi-exclusive circle in the Bay of Pampelonne. Ultimately it was a great week despite the weather constraints.”