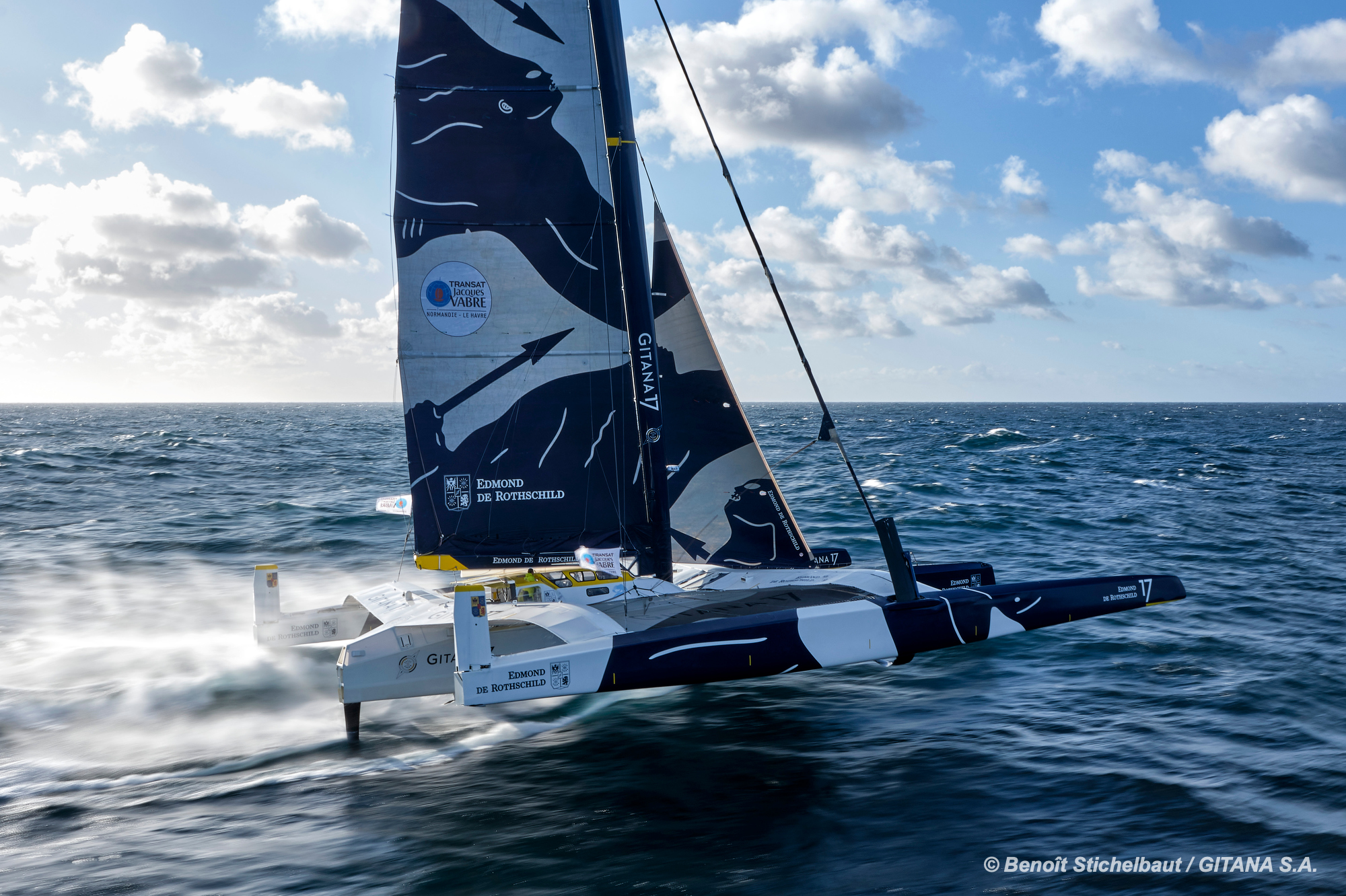 This morning, the Maxi Edmond de Rothschild rounded the rocks of São Pedro and São Paulo; this final course mark of the Transat Jacques Vabre was first negotiated on the outward leg early afternoon on 15 November by the Cammas-Caudrelier duo.

In this way, the leaders of the Transat Jacques Vabre sailed from there to the Trindade and Martim Vaz archipelago and back in a time of 3 days and around 18 hours, which equates to an average speed bordering on 29 knots to cover the 2,550-mile looped circuit in the South Atlantic.

The upcoming scenario looks set to change, however.

“Downwind conditions are due to make their return now and with it comes another game entirely,” warned Erwan Israël from Gitana Team’s weather routing cell.

“There are around 2,000 miles as the crow flies between São Pedro and the finish, but it won’t be a straight-line course… For the coming days, we’ll have to make headway trapped between a no-go zone along the coast of northern Brazil, Guyana and Venezuela and the doldrums, which is stretching out to the west and blocking off the northern section of the playing field.”

The Maxi Edmond de Rothschild has once again been sailing in the northern hemisphere since this morning, but this return will be fleeting as the router explained: “there will be several equator crossings on the cards for this race finale and the number will depend on where the gybes are positioned.”

To tackle this final 2,000-mile sprint, the Cammas – Caudrelier duo boasts a sizeable lead over its pursuers. At 14:00 UTC, the Maxi Edmond de Rothschild was positioned 361.5 miles ahead of Banque Populaire XI and 481.2 miles in front of SVR – Lazartigue, second and third respectively.

“We’re going to see our rivals close on us with the breeze. Indeed, because we’re blazing a trail out front, we’ll be the first to stumble into the light patch which is looming. There is a great deal of uncertainty colouring this final section as it involves the doldrums, which is also complicating matters in terms of our time of arrival,” said Erwan Israël who, alongside Stan Honey, is really keen to get his teeth into these last few miles of the race.

“To date, there are still some discrepancies regarding the ETA as the weather models are struggling to agree! It will be between 23 and 24 November… We’ll know more on Sunday,” he concluded