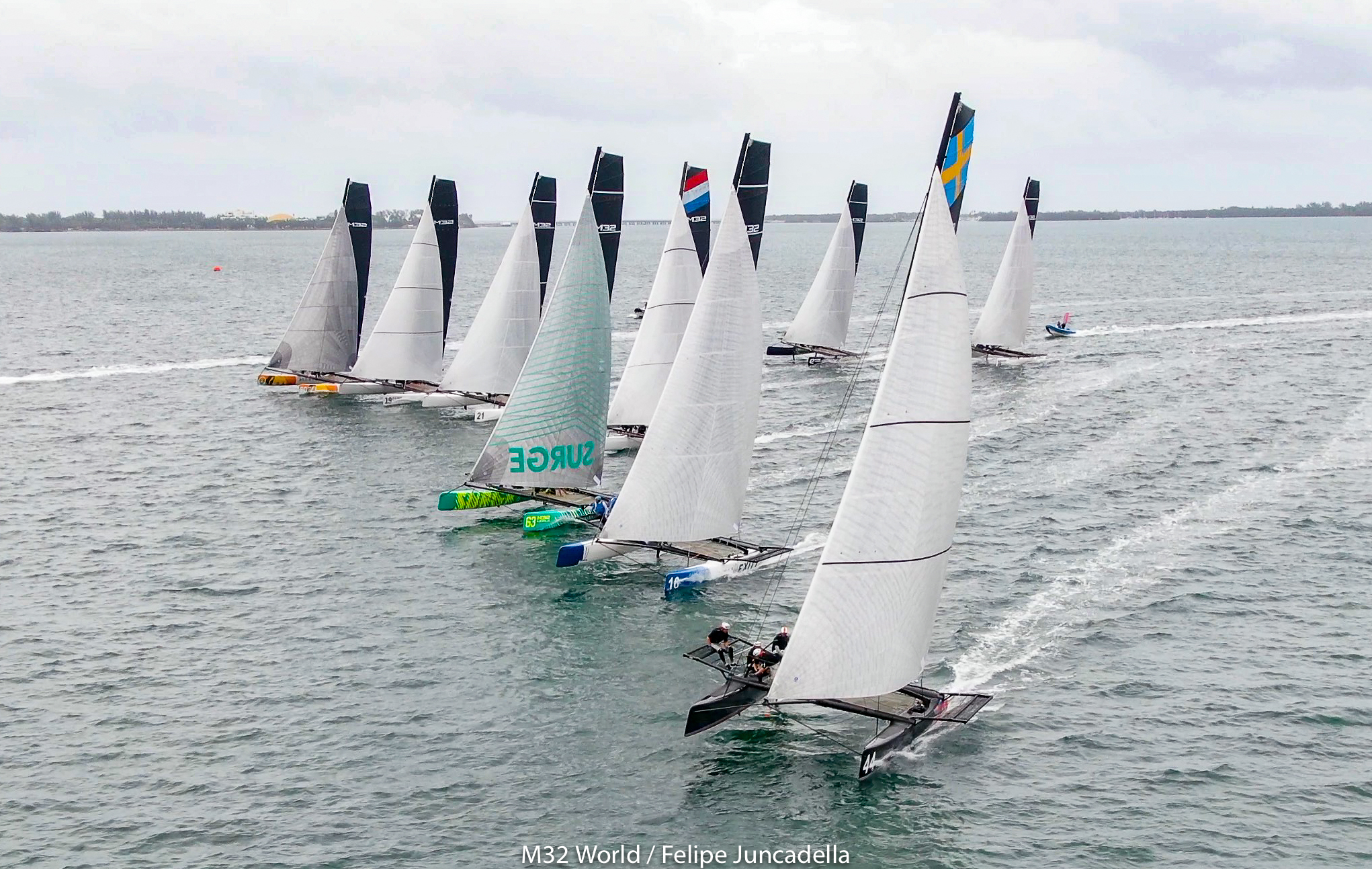 Off to a flying start on Day 1 - Felipe Juncadella pic

Nineteen races have been scheduled over four days. With the potential for inclement weather late on day one, the race committee was eager to take advantage of the conditions and got five races away.

If the two days of pre-worlds racing were any indication of the competition to come, you can expect a strong title fight from Don Wilson on Convexity, Pieter Taselaar on Bliksem, and Anthony Kotoun on Catapult.

Convexity and Bliksem are no strangers to the top of the M32 podium, but Catapult is a dark-horse team. Kotoun has been more often a tactician than a helm.

At the end of day one, Wilson sat in first with Kotoun in second, only two points behind. Of course, as the old racing adage goes, it can be bad luck to win the pre-worlds.

Ryan McKillen and his team Surge were out to prove that point today with a performance solid enough to put them in third place going into Day 2 and striking distance from the top of the podium.

“You can’t win on the first day, but you can lose it, so we’re happy to be in the mix,” McKillen, said.

Team Midtown, driven by Larry Phillips, made a statement by winning race three to find themselves within reach of the podium and only one point behind Surge. Phillips’ boat sported a brand-new siren-themed livery on its bows, making it hard to miss on the racecourse.

“In that race, we got to the reach mark in first and stayed ahead and that’s obviously a great feeling,” helm Don Wilson said after the race.

Catapult, Bliksem, and Midtown all took their own race victories before the day was done.

The sheer size of the fleet made congestion around the race course a tactical challenge. Teams whose drivers and tacticians guided them cleanly through traffic reaped the benefits.

Andrew Campbell of Midtown said after racing: “If we could stay clean we were happy.”

Pursuit, driven by Bill Ruh, was not so lucky. She picked up a couple of penalty points early in race three when, tacking onto port in a tight space, they caught a piece of team Bliksem.

On-water umpire, Remy Donraadt, was right there to make a quick judgement on the penalty. Pursuit tactician, Rome Kirby, now has his work cut out to put his team back on the right track over the rest of the weekend. It won’t be easy, but it’s too early to count this team out.

Alongside Donraadt, umpires Craig Mitchell, Brad Dellenbaugh, and Christine Accettalla are governing fair racing all weekend so sailors returning to the dock can be free to focus on enjoying the festivities with the rest of the fleet.

At the end of the day sailors enjoyed a Mexican grill with Bacardi drinks to refuel for tomorrow – there is plenty of racing left.