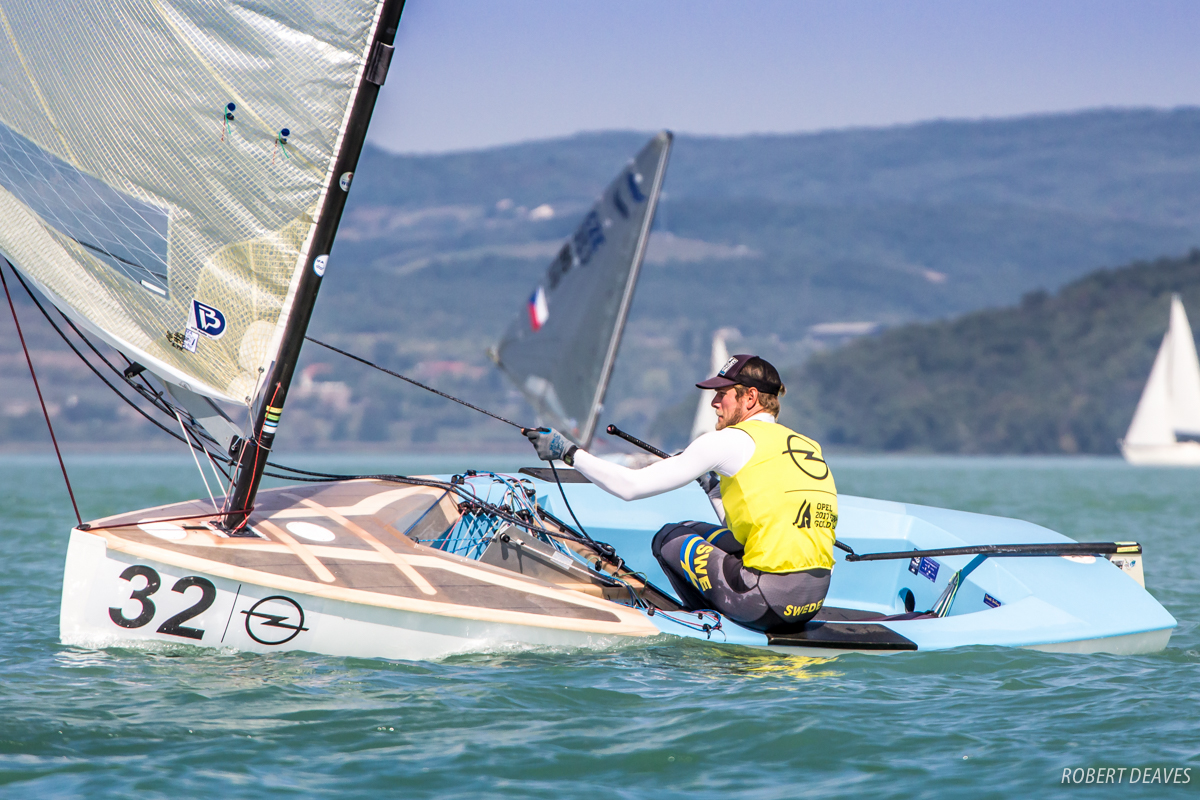 Max Salminen, from Sweden, has secured his first Finn world title as the 2017 Opel Finn Gold Cup closes at Balatonföldvár with an extremely close and intense medal race in light winds. Jonathan Lobert, from France took the silver while Nicholas Heiner, from The Netherlands, took bronze after leading the race from start to finish.

With a reasonable wind forecast it was with some dismay that the sailors arrived at Spartacus SC to a windless lake and a postponement. However it wasn’t long before an easterly wind was in place and the top 10 were sent out for the medal race.

The title was down to five sailors, with Salminen, Wright and Lobert with the best chances, and Heiner and Zsombor Berecz, from Hungary with outside chances.

Sailed in 6-8 knots it was the kind of conditions the sailors had expected all week, and that many had trained for. Heiner was especially keen to sail in light winds and it was soon obvious why as he took the lead on the first upwind and never relinquished it. He had done everything needed to be in with a chance of a medal, now it just depended what happened behind him.

Ed Wright, from Britain, started badly and then got a yellow flag on the downwind. But he pulled back on the subsequent legs to cross in sixth place.

Lobert had an even worse first leg, rounding the first mark in last place and having a lot of work to do to keep a medal or take the title. He made some ground downwind and on the second upwind and then moved up to fifth on the final downwind, which was just enough for the silver medal.

Salminen controlled his main opponents and defended against Lobert and Wright. But the title nearly slipped away from him on the final downwind as the pressure dropped out on the left and both boats passed him just before the finish.

As the fleet crossed the finish line there was some frantic maths to work out who had won what. In the end, it was extremely close, with just three points separating the top four boats. Even the coaches didn’t want to commit for fear of missing a point. But finally the results were known and the celebrations began.

In the final race for the rest, it was quite fitting that the race win went to the new U23 World Champion Oskari Muhonen, from Finland. This gave him an impressive 11th overall in the Finn Gold Cup.

Facundo Olezza, from Argentina, picked up the best U23 prize from Muhonen and Henry Wetherell, from Britain.

Sailing at his first Finn Gold Cup, Heiner commented, “I think it was quite an interesting week, and for sure not what we expected wind wise. In the training days and early races we had quite a decent breeze and finally today we had a bit lighter and the training paid off and I won the medal race.”

“Having said that, I think I lost a few places in the races just by my own mistakes, so I am a bit disappointed with that, so could have got away with a bit more.”

After his first year in the class, “I have spent nearly a year in the Finn now and spent three quarters of the year training with Rafa [Trujillo]. It’s my first Finn Gold Cup and it’s not a bad result if you think about it. I have had a really nice season, but for sure I need to be a bit more consistent on speed. We know how to race, but I need a few extra kg down to be competitive against the big guys in a breeze. So we are going to hit the gym and the supermarkets again.”

Lobert, who nearly gave up sailing after a disappointing result in Rio last year continues his stellar season.

“It was a very tough week. We did seven very good races and I think I have been sailing very well all week. I was at least five times leading races, but in the end I lost a few points and today I paid the price by finishing second by one point.”

“It’s very, very frustrating, but if someone had told me I would finish second with one point to the gold, I would have been happy. It’s a medal and I am happy to being another one home.”

He adds the silver to the European title and third in Hyeres. “The season has been very good to me, so not to bad for someone who was away for a while after the Olympics.”

On the medal race, “It was very tricky. I thought there was more pressure on the right, so I was protecting that on the first upwind, but it came from the left. But I kept on fighting and came back into the game.”

On the competition, “It was a very intense medal race. We could all play for the medals, and that was very nice. I was really looking forward to going on the water and having a nice race.”

“I think it is good for the Finn to see that there are so many guys and countries and the level of the fleet is always getting better.”

Salminen was also disappointed with his performance in Rio last year.

“It was a devastating medal race in Rio, so that’s why this success is even more sweet now to be able to show to myself that I could pull off a good medal race and do what I need to do”

“It’s been an amazing week and I am just so happy that, even though it was a really light medal race that I managed to finish it off in the best way.”

“I got away really good and managed to control the other bib holders around the course, but then the last downwind the wind died a bit and it got a bit nerve wracking there for a bit.”

He has trained with Lobert for many years. “Beating Jonathan at any event is as big an achievement as winning the world title. He is an amazing opponent and sparring partner, one of the best who pushed me each and every day.”

On Balaton “I tried not to have any expectations about sailing here. I knew there could be some waiting on shore, but especially the first half of the week was amazing, with really good racing. It’s challenging for any venue to host a event like this with 100 plus Finns, so it’s been a positive surprise to me.”

“This has been the target all year and we were trying to train in the light stuff, but it only really paid off in the last race.”

At the prizegiving he paid tribute to his coach Dayne Sharp, his training partners Lobert and Tapio Nirkko, from Finland, and also to the whole fleet for being such good role models for the sport of sailing and such good examples of sportsmanship.

Finally, thank you to Spartacus Sailing Club and Balatonföldvár for putting on an outstanding Finn Gold Cup, for Opel and the other sponsors, for all the supporters and helpers. The friendly welcome and hospitality the sailors have received has been nothing short of exceptional.