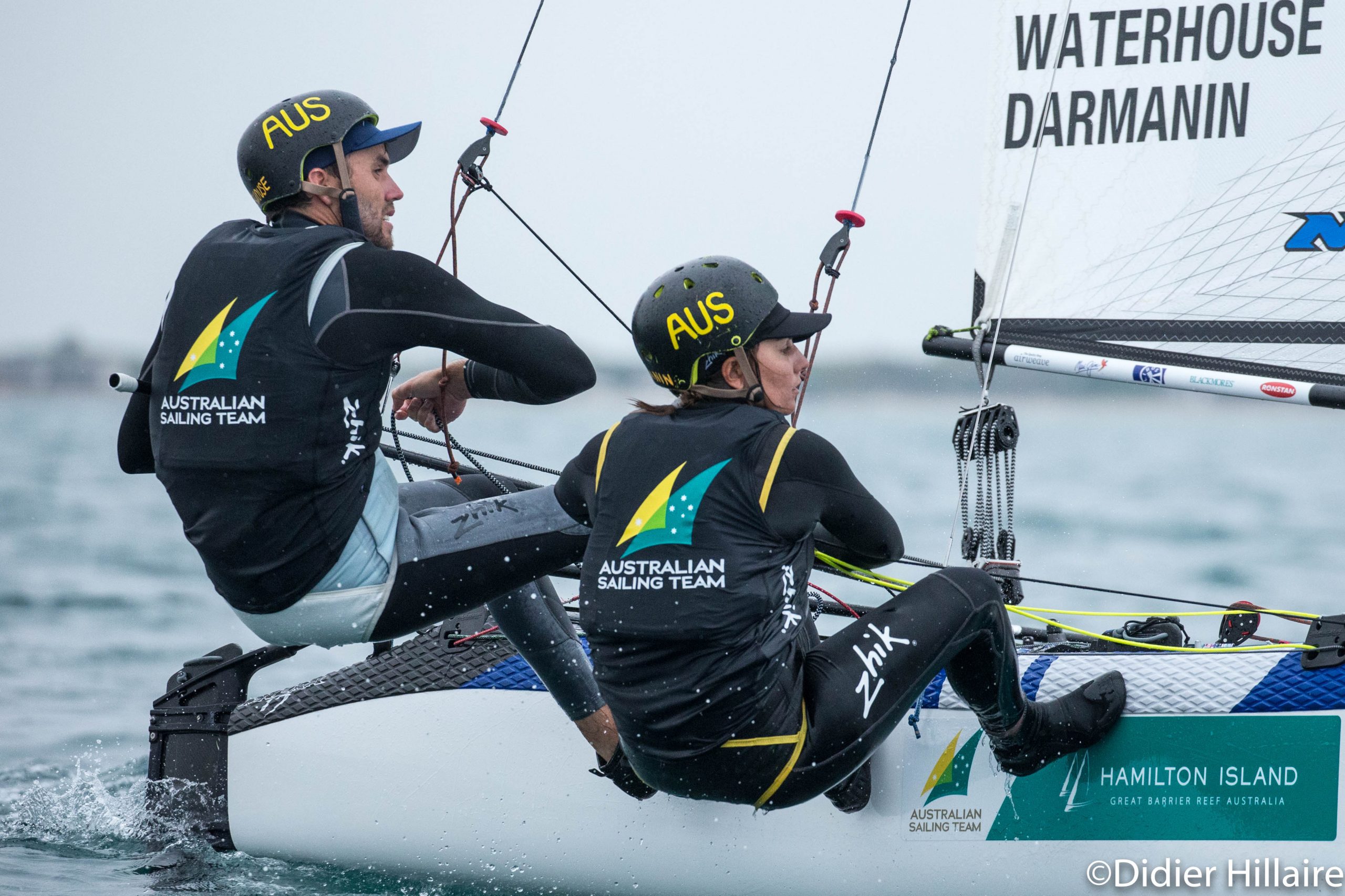 Title contenders at the Nacra 17 World Championships in La Grande Motte in South France may be relishing what is expected to be a big winds Sunday finale, a chance to show the newly foiling, flying Nacra 17 at its most exciting, but they had to deal with a penultimate day of light, fickle and patchy winds as a precursor.

A brisk north-westerly Tramontane breeze is due to blow in off the Camargue’s salty steppes at up to 25 knots by afternoon tomorrow.

The schedule is for two more races, starting from 1000hrs, for the Gold fleet before the showdown Medal race. But this may be altered depending on the wind and sea state, the priorities being safe and fair racing and the arena style Medal race which is usually scheduled to be sailed on the inshore arena. If conditions permit it will be the first time the newly flying, foiling Nacra 17s have contested a single Medal Race.

Neither at the European Championship nor the Aarhus 2018 Sailing World Championships Test event did a single, showdown Medal Race take place.

The British Sailing Team’s coach, 2000 Sydney Olympian Hugh Styles, highlighted the excitement among the sailors: “It will be a great day. There are not so many chances you get to do something so different in Olympic sailing. It is very positive.

“We’ll see another new dimension of sailing here. It should be a great show. It is so exciting to be involved in this part of the sport at this early stage and it is all really developing fast. World Sailing has done a great job of embracing the opportunity to try something different. And all the sailors here are really relishing this opportunity.

“In some respects the outcome tomorrow is not so, so important. At the moment this is about learning and that is a very engaging thing.”

Echavarri and Pacheco won the first of today’s races ahead of Saxton and Dabson but then, after the wind shifted from the north-west into the south-west for a shifty, difficult second race the Spanish duo plummeted to a 19th when US duo Riley Gibbs and Olympian Louisa Chafee triumphed with the British pair second again.

Britons Gimson and Burnet won the third race to get themselves into contention for the final day, the leaderboard holding some similarities going into the final day as there was one week ago at the 49er World Championships in Porto.

While World Ranked 1 Saxton, ninth in Rio, has been in the Nacra 17 pretty much since the mixed class debuted in March 2013 and was runner up to the Nacra 17 World title in 2013 in The Hague, Holland, world championship sailing is relatively new to Katie Dabson.

Although she has known Saxton for many years and the pair grew up at the same sailing club, Grafham Water, she has only recently started sailing full time. Together they won the last two breezy races when the chips were down at the Europeans to steal the Bronze medal in Kiel.

After racing today Dabson said, “It is still is a bit of a dream for me to be here and having been able to jump in the boat only in May with someone like Ben. He knows what he is doing. It’s a steep learning curve but we seem to be getting there. I was in the 470 for about a year.

“We have known each other pretty much since we were born, well, certainly from Grafham Water Sailing Club where we grew up. He knows what the boat needs. He was someone to fit the boat. I have some height on some of the crews. It is useful to be able to get your weight further out and get foiling. “ Tomorrow will be a big day, pretty windy. It will be nice to get out in some wind.

“Before this, I was at university and so as soon as I went full time, it was straight into the Nacra 17. This is my first introduction to Olympic sailing and big events. Externally maybe it looks OK but internally I am, like, aah! But we have such good support here and at home, everyone is very aware that I have been thrown in at the deep end. That is very useful, they are very helpful and really on it.”

As predicted the title hunt remains wide open. Frustratingly for the leading pair a 19th in the final race spent a lot of the 15pts lead they had going into the third and last race of the day, and they have a U flag penalty as their discard.

Dabson added, “We try not to think too much about the UFD because it could get to you. We are just treating each race as a race on its own, racing with what you have got.”

Italy’s European champions Ruggero Tita and Caterina Banti are fourth, 15pts off the lead and Spain’s double Olympic medallist Iker Martinez with Olga Maslivets are fifth, 17 pts behind the leaders.

Maybe Martinez is cherishing memories of stealing the 2014 European title here on a windy final day and looking to create a repeat performance.