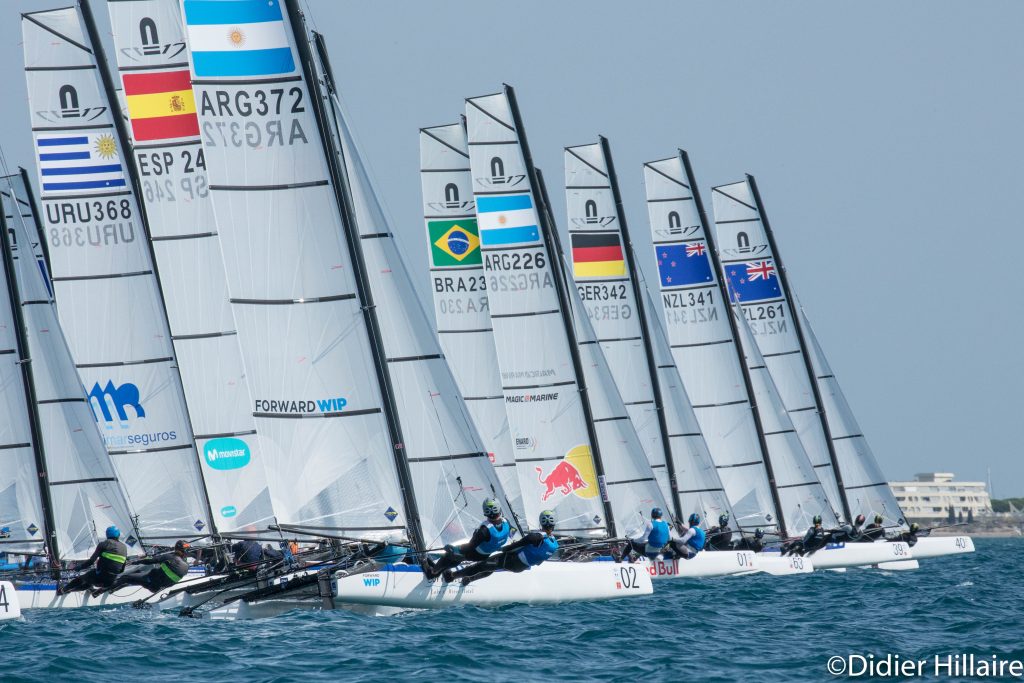 It is not Le Tricolore, but the Il Tricolor, the Italian tricolour flying highest over La Grande Motte in the South of France after the first day of gold fleet racing at the Nacra 17 World Championships.

As the intensity of the first day of Gold Fleet Finals racing took full effect, compounded by there being only one way to go off the high octane start lines, several top seeds made mistakes, including Black Flag penalties, some which may prove very costly.

Tita and Banti finish the day two points ahead of Spanish rival pairs Fernando Echavarri and Tara Pacheco and Iker Martinez and Olga Maslivets who are just one point apart.

But with six races and Sunday’s Medal Race still to go, the 2017 championship is wide open, with just 10 points between the first seven crews, so coaches and medal winning athletes alike expect this chase go down to the wire on Sunday’s Medal Race.

Now sailing with Maelle Frascari, Italy’s 2016 Rio Olympic helm Vittorio Bissario won the first race today as the first crew to start close to the pin, left end of the start line and break first away to the favoured left.

They lead all the way around the course, benefiting from the bend on the left side of the course and the slight extra pressure. In contrast compatriots Tita and Banti had a poor start and had to fight back to 15th in the 24 boat gold fleet. Roller coaster leaderboard In the 10-12kt sea breeze conditions which remained relatively stable through the three races, increasingly the fight to get off the line and escape in good shape drew casualties.

Britain’s Ben Saxton and Katie Dabson suffered a U flag disqualification which, after a 15th in the third race dropped them from second to fifth for the day. Among the top title challengers their weighty error was not isolated. No sooner had New Zealand’s Gemma Jones and Jason Saunders gone 2.8 to lead the regatta than they capsized in the third race to finish 24th.

Lying second, Spain’s vastly experienced Fernando Echavarri warned, “This is still a long championship with six races to go. Every race it is easy to make a mistake and once you make a mistake or go to the wrong side it is really, really difficult to get back to the top.

“It is going to be about the balance between taking just enough risk and too much risk to get into good positions.”

The leaderboard roller coaster continued as France’s top duo Moana Vaireux and Manon Audinet, based in La Grande Motte for much of the year, made their second bad start from three to finish eighteenth, dropping to seventh. And Danish duo Lin Ea Cenholt and Christian Peter Lübeck could not impose themselves as they lead the qualifying series, today going 16,13,13 to drop from first to fourth.

Franck Citeau, the coach of the French team contends, “The key today? Start, go left and the race was finished at the first tack. You had to win the buoy and get away.

“In this world championship there is no favourite – no one has the edge. And right now there will be a different leader, a different world champion, each night until the end of the Medal Race,” Citeau predicted.

And so it is the Medal Race that will decide this world championship.

In this fleet everyone can make mistakes, as we saw today. Perhaps Echavarri has the advantage, not in speed, not in technique, but he is the metronome. He is the consistent one.

With this new boat and the limited training time we have all had then the level is pretty homogeneous, pretty even. Nobody stands out. And in the end it might be like the Olympic Games were on the day Santi Lange won because he got the job done.

There is a certain similarity between the European Championship podium and tonight’s World Championship leaderboard, Tita and Banti winning in Kiel in early July by a single point from Echavarri and Pacheco.

There are also some features common to the 2014 European Championship on these same waters in La Grande Motte where Iker Martinez won, sailing with Pacheco. Italy’s Bissario was third at the Championship.

Echavarri, 2008 Olympic Tornado gold medallist, was taking little store from their rise up the leaderboard, “We were struggling yesterday when we could not get out of our own way.

“Today we were fast and we are happy. But the fleet is so very even, one bad day can change everything. Basically we were not on the course yesterday. We talked after racing, we don’t like to be in the corners and yesterday we did not take enough risk. But today there was more wind and we felt a little more comfortable. “In general, a good day for the Spanish and the Italians.”

Echavarri concluded, “ There is a long way to go with these boats to be able to sail them to their potential, a long way. We did not train much, we did the Europeans and Aarhus. This winter will be key. It is too early to know where we will go in the winter and what we will do. We don’t have a plan for tomorrow far less the winter!”