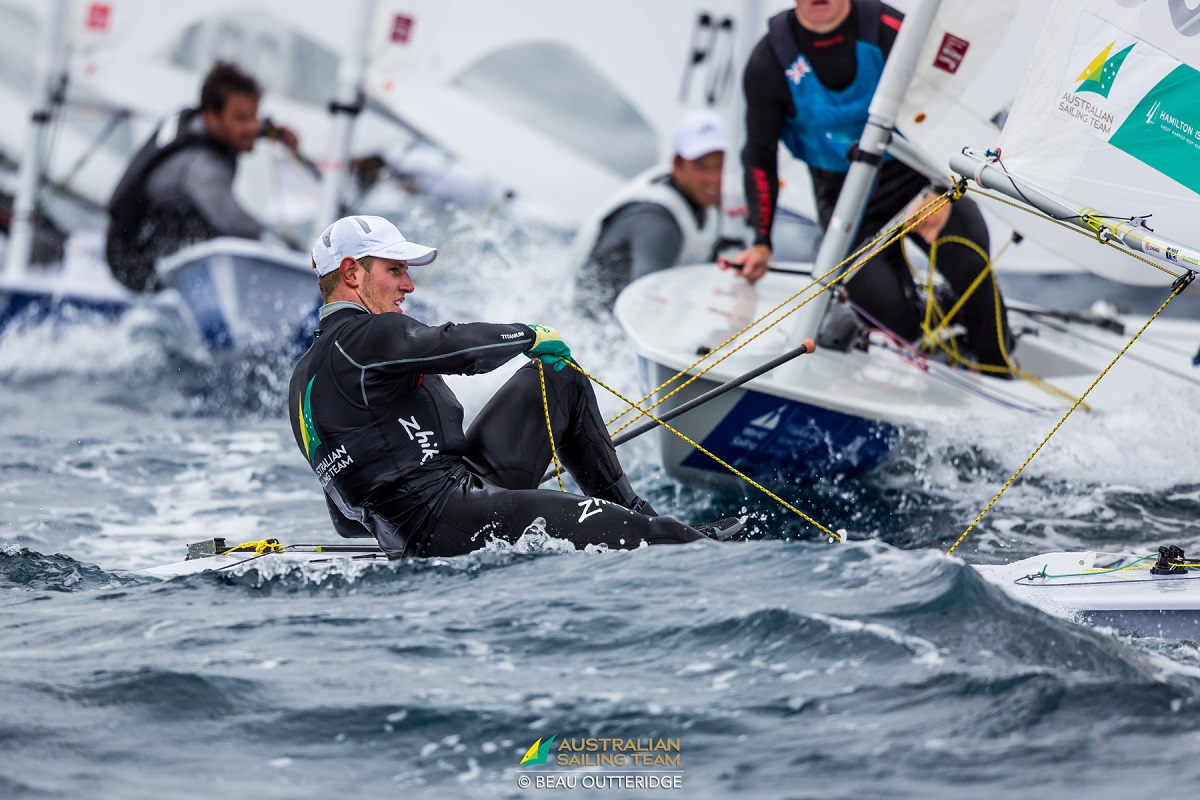 Out of the 534 racers from 52 nations, racing across the ten Olympic events, Foiling Formula Kiteboarding and 2.4 Norlin OD, Heiner has been one of the most reliable performers with a string of top five finishes to lead in the Finn.

Racing in a 7-13 knot breeze that took some time to fill in, the second regatta of the 2017 World Cup Series reached its mid-point and the battle to make Saturday and Sunday's live Medal Races is on.

In only his third Finn regatta, Heiner had another consistent day of racing to take the lead in a fleet packed full of experienced racers.

Although he's a fresh face in the Finn, the Dutchman is no stranger to competitive racing. He is a former Laser World Champion and used to racing in competitive fleets. Moving into a new boat can always be challenging for a sailor but Heiner has thrived in the Finn after making the crossover.

From Thursday's racing, he picked up a second and a fifth and made all the right calls on a challenging day. “The wind was coming in and falling out all the time, but when we finally started it really kicked in to around 12 knots. Close to the start though I made a quick call to change the sail from the light wind to the medium heavy and I think that paid off well for me.”

Heiner is staying conservative in his racing, ensuring he has good boat handling and technique amongst the experienced pack. The natural, talented fearless sailor that sailed his way to an emphatic Laser world title in 2014 is yet to come out in Heiner. But for now, he is happy with his progress, “At moments, I think I saw some pressure coming and maybe tacked a bit early when I could have taken more risks. The idea is to keep it really conservative and stay with the pack right now.”

Fabian Pic (FRA) and Ben Cornish (GBR) trail Heiner by nine points with Alican Kaynar (TUR) a further point back. There is plenty still to play for with four fleet races and Sunday's Medal Race to follow. Kaynar is targeting Heiner and will be aiming to climb up the leaderboard, “I think Nicholas extended his points lead today but we are still close. I just have to keep in contention and then attack in the last races.

“Today Nicholas sailed very conservatively I think and always caught the good shifts. He had good down winds today as well so he was always there at the front.”

Damien Seguin (FRA) continues on the path to glory in the 2.4 Norlin OD. The Rio 2016 and Athens 2004 Paralympic gold medallist has won all but one race this week and is firmly in control to win another title in Hyères. “I don't know how many times I have won here,” laughed Seguin, “but I have been sailing in Hyères for a long time. I think I was 21 when I first sailed a Tornado here.”

Seguin has won six titles in Hyères and is in line to make that seven. But with new sailors in the fleet, Seguin is preparing for the upcoming Para World Sailing Championships in Kiel, Germany.

“It's a smaller fleet but we have some new people which is great. One from Guatemala and two younger people, so it's great to have some new guys to race against.

The sail of the day goes to Germany's Victoria Jurczok and Anika Lorenz who took all three wins in the 49erFX. That perfect performance moves the German team up in to silver medal position. They will need to continue that winning form though if they are to overhaul Martine Grael and Kahena Kunze (BRA) who are 10 points ahead.

Great Britain's Dylan Fletcher-Scott and Stu Bithell edged ahead in the 49er with a 1-8-4. Those results give the Britons a slender two-point advantage over Spain's Diego Botin and Iago Lopez.

Rio 2016 silver medallists Mat Belcher and Will Ryan (AUS) have cut the gap at the top of the leaderboard to one point behind the Rio 2016 bronze medal winning Greeks, Panagiotis Mantis and Pavlos Kagialis who currently occupy top spot in the Men's 470. Mantis and Kagialis had to discard a 27th place before picking up a bullet in race two as they came under pressure from the Aussies who took a second and third for the day.

The Women's 470 leaders mimicked the men's with a discard in the first race and a bullet in the second. Dutch racers Afrodite Zegers and Annaloes van Veen discard their 16th and as a result are now tied on 15 points with Switzerland's Linda Fahrni and Maja Siegenthaler. Silvia Mas Depares and Patricia Cantero Reina (ESP) are three points back in third.

Swiss windsurfer Mateo Sanz Lanz remains top of the Men's RS:X despite slipping outside of the top five in a race for the first time. Thanks to his consistency so far in Hyères, Sanz Lanz could discard his 23rd place to hold a six-point lead over Israel's Shahar Zubari and a 20-point lead over France's Louis Giard.

In a day of catch up for the Laser fleet it was Australia's Matt Wearn who came out on top with a bullet, second and fourth place from three races. With the schedule back on track it will be Wearn's job to keep second placed Pavlos Kontides (CYP), third placed Francesco Marrai (ITA) and the rest of a strong dinghy fleet at bay.

Despite a black flag in the final race of the day, Hungary's Maria Erdi heads the Laser Radial fleet, but only just. The young Olympian will need to be careful there are no more slip ups if she wants to end the regatta with a medal. Waiting for any possible slip is Evi Van Acker (BEL) just one point behind in second.

Home support will be aimed toward the Nacra 17 fleet as Moana Vaireaux and Manon Audinet (FRA) are tied at the top with Spain's Fernando Echavarri and Tara Pacheco on 23 points. Lin Ea Cenholt and Christian Peter Lubeck are in third on 28.

As the breeze died later on in the evening, the Kitesurfers were unable to hit the water but they will resume tomorrow for their finals.

Racing resumes at 11:00 local time on Friday 28 April. The forecast shows big breeze and the RS:X, 49er, Nacra 17 and Kitesurfers will be aiming to grab a spot in the Medal Race.

Live Medal Races will be shown on the World Sailing YouTube Channel on Saturday 29 and Sunday 30 April, bringing the penultimate event before the Santander Final to a close.