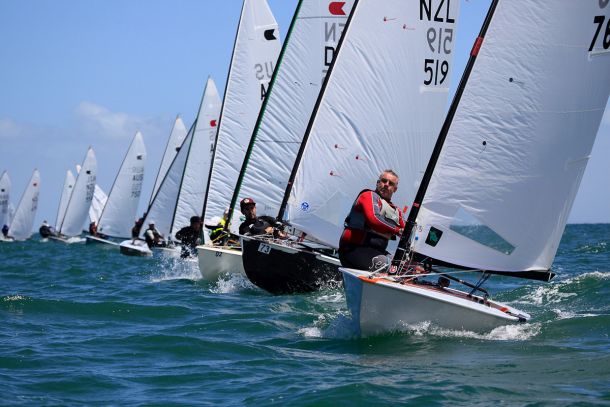 Rob McMillan at the pin end of the fleet. Photo Alex McKinnon.

After a week of uncooperative weather at Black Rock, Australia, the OK Dinghy World Championship wrapped up in perfect Port Phillip conditions. Matt Stechmann (NZL) did just enough to take the title by one point from Luke O'Connell (NZL), who won a three way points tie with defending champion, Roger Blasse (AUS), who took third overall, and Greg Wilcox (NZL) in fourth.

Going into the final day, the fleet needed two more races to get in a valid series, so there was audible relief as the sailors arrived on Sunday morning to a sailable 15-20 knots on the bay. The day started damp and grey, following the overnight storm and rain, but by the second race the sky was clear and the sea breeze was pumping. The strong winds of Saturday had also left a large confused sea behind, but this soon moderated along with the wind.

The first race of the day, race four went to Mike Williams (AUS). He said “It was about 15 knots, so a nice breeze. I got off the line cleanly and just had a good lane and got around the top mark just behind Ben Morrison (NZL). I got through him at the gybe mark and was able to keep the group just behind me, but they were so close to me the whole time, it was a bit nerve racking.

“When the wind started dropping out half way through the race I was a bit concerned the lighter guys might come through. Matt Stechmann (NZL) and Matt Coutts (NZL) got into their own little tacking dual, that was before Matt Coutts knew he was BFD, so that let me sail away a little bit from them.” Coutts was one of eight sailors black flagged at the start, which somewhat hindered his chances of the title. Williams led across the line from Morrison and Greg Wilcox (NZL).

By the time the second race started the dropping wind had been reinforced by a growing sea breeze. The sailors were able to stretch their legs and enjoy the conditions and the sunshine to the full. The main battle was between Stechmann and Luke O'Connell (NZL) for the title, though it was so close it could have gone any of five ways.

After a week of drama and waiting, the event then had a poetic ending. Black Rock YC Commodore, Andre Blasse (AUS), had spent the previous two years organising this championship, and dominated the final race to win by a massive margin. It was a very popular win. He said, “It was good fun for me. I came off the start line near the starboard end, tacked, ducked a couple of boats and got the first shift and just went up the middle. I was first to the top mark and thought I was pretty quick downwind and got away. It's beautiful having nice clear air out the front” He took a huge win from Wilcox and Morrison.

However the real drama was playing out behind them as Stechmann tried to stay in touch with O'Connell.Eventually Stechmann crossed in 10th with O'Connell in eighth, to give Stechmann his first ever OK Dinghy World title. O'Connell took the silver while the defending champion Roger Blasse (AUS), from the home club, took the bronze.

Blasse continued. “It was perfect Black Rock conditions with fantastic waves. I wish we'd had a little bit more of that during the regatta, but unfortunately we didn't. It's a shame for the overseas competitors but at least they got to see what it can be like. The race committee did a great job in difficult conditions all week.”

“After two years work it's fantastic for me to finish the week with a race win. I have won a couple of races before but not for a while, so it's nice to do that at home, after all the work.”

The visitors to Black Rock have learned a lot about Australian weather this week. Most came expecting the nice sea breezes that makes sailing in Port Phillip famous. But it was not too be. Of the six days, three were lost through strong westerlies and northerlies and a further race was lost when the wind went away. The 77 sailors feel very fortunate that they were able to complete their championship on the final day.

Stechmann's win also completed the hat-trick of Kiwis winning the OK Dinghy World Championship at Black Rock YC after Rick Dodson (NZL) in 1982 and Leith Armit (NZL) in 1990. In fact, no Australian has yet won the title when it has been held at Black Rock.

On his chances today, Stechmann said, “I was quite confident that I could perform good enough today to give myself a chance. But whether I woke up this morning thinking today I would win the worlds, probably not.But I was confident I could put in a good display and let it all unfold.”

“The first race went incredibly well and I got a good start just up from the pin and managed to get over the little bunch to leeward of me which really gave me the leverage to sail the way I wanted. I could sail low and quick to the left hand corner and we got a shift which popped us up into a nice lead with a few other boats. Though Greg and Luke still had good races, that really set me up to hold all the cards for the final race.”

“I always knew I had the biggest drop, so my game plan for the final race was just to stay close to Luke and shadow him round the track and see how the cards fell. There are so many good guys out there, you just had to sail your own race but Luke and I pushed each other hard to be in the top bunch, and on the line there was just one boat between us, and that was enough to give me the one point lead.”

“I am absolutely over the moon to be honest. My goal for this regatta was top five, I thought that would be a good effort here and just to really focus for 2016 worlds in 18 months times. I am just stoked about this.”

“I am absolutely thrilled for Luke. We work together and we're pretty tight. We do a lot of training together. His day day will come but I am absolutely rapt that if I had to go toe to toe with someone it would be Luke. Could we have planned it any better? Probably not.”

Silver medalist O'Connell paid tribute to Stechmann, “It was a great week. Very challenging conditions, very difficult for the race officer and the competitors, varied conditions and as always great fun. I am thrilled with second place. Thrilled to get my first tie and thrilled to finish second to such a great bloke. I am well happy with the result and Matt is definitely the deserving winner.”

Roger Blasse took the bronze. He said, “I think of course the weather could have been better, but I am happy about the guys who won. They have done a lot of work in the last few years with their boats and their sailing, so that's really good. I am happy with third as I don't think I sailed well enough at times, because it was such a short regatta. At times I had a couple of bad first works, so I couldn't get round the top mark how I liked, but that's just sailing sometimes. It doesn't always go your way. So I was a bit surprised to end up third. It was a good week, just a shame we didn't get better weather.”

In accepting his winners' prize Stechmann said, “In the circumstances I think the race team have done a fantastic job. I never came here expecting to win this contest. One of my goals coming here was to win a race just to prove I could, because I don't win many, in fact I have never won an OK regatta before. I could stand here all night and thank people who have had an impact on my sailing career.”

He thanked his New Zealand team mates. “Any one of those guys could win this event, and they will. There's some good men there. They all have a piece of this. It's not just about me winning this. It's a team thing. We share info and have come a long way in a short time. We do some great yachting and have great camaraderie. I wouldn't be standing here tonight if it wasn't for you, so thank you.”

“It's been a wonderful event, not just because I won, but to be here with all my friends from around the world. Every year we all get together and have a great time. It's what it's really all about. This is a really massive moment in my life and I am really pleased to be able to share it with all of you.”