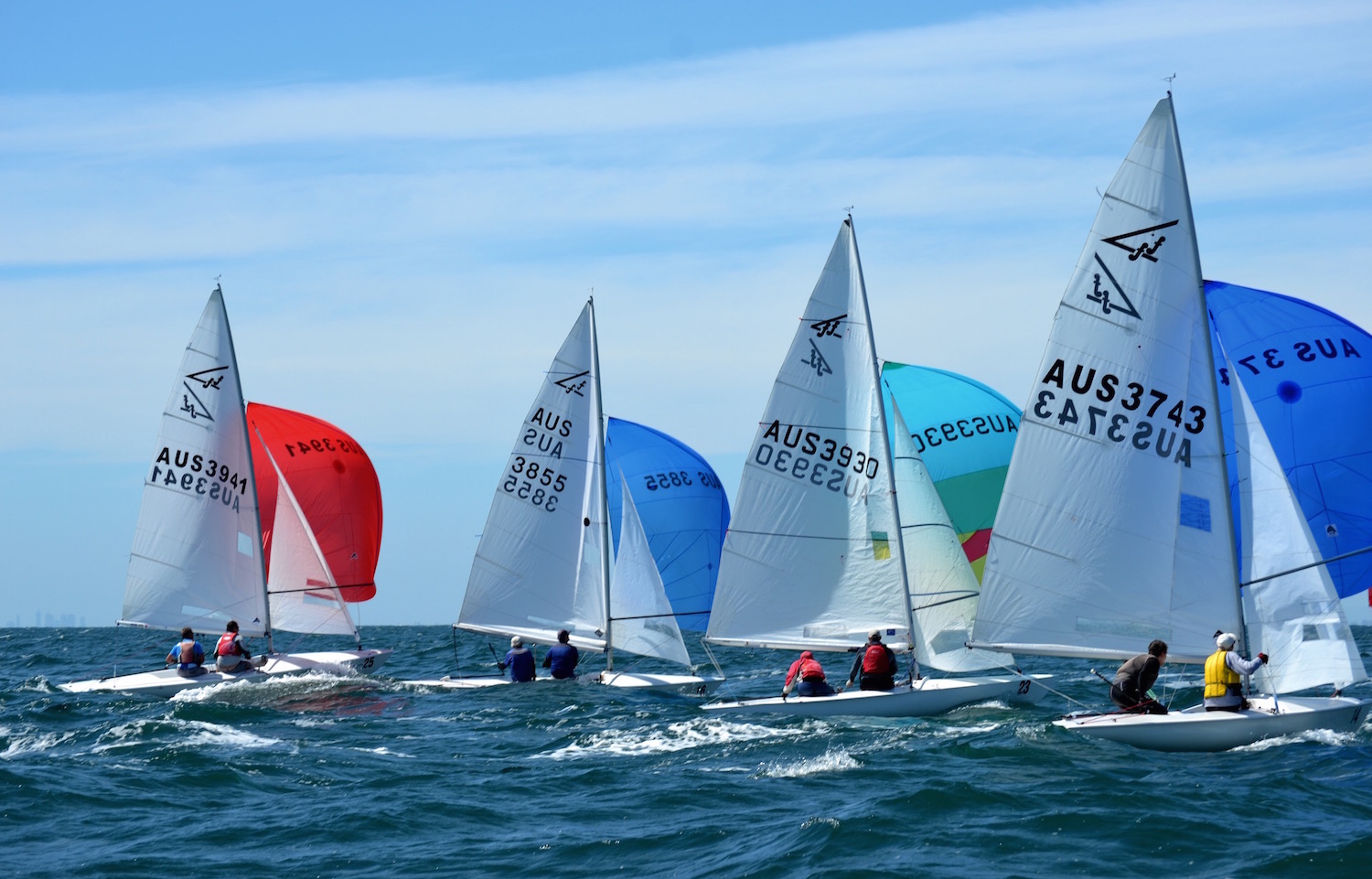 The Canberra YC team of Matt Owen and Andrew Reed have moved into a commanding position with two bullets on race day 3 of the Flying Fifteen Australian Championship held at Mornington YC on Port Philip Bay.

Two more races held in perfect Flying Fifteen conditions, the first race of the day, race 5 of the championship, was started in 12 – 15 knots, building to 15 – 17 knots for race 6. A longer course using shorter legs but a triangle, sausage, triangle and work to the finish configuration, provided lots of three sail reaches and exciting downwind sailing.

Andrew Reed, crew on board the winning boat, Cool Change, describes their winning performances: “In race 5 we started right down at the pin end, led round the top mark and on the triangle, the boats in front extend, so a couple of good waves and that was it. Some good gybes and fantastic surfing on the runs.

“We started mid line in race 6 and worked mid left, the boat felt really good. A couple of well timed waves on the first reach and we got away again. We had good boat speed and solid boat handling. It’s a good atmosphere out there, everyones in a good space.”

John Wilson and Matthew Summers from South of Perth YC are starting to string some consistent results together finishing second and fourth, to move into second place overall but 11 points shy of the leaders.

Sue Thompson and Cameron Taylor from local club, Davey’s Bay YC also had a stellar day moving into third overall with a 6th and 3rd today.

“In race 5 we changed places quite a bit at the front end of the fleet. We lost a few places downwind but gained them back upwind. In the second race we gained a lot of places at the bottom gate after the run, when we chose the opposite gate to the lead pack and came out on really good numbers. We stuck with it to pass several boats to move into 3rd. Two boats caught us on the triangle but on the final working leg we were exhausted but found another gear to hold on for 3rd.”

Sue’s son John Radnell, part of the colourful ‘Flying Flamingo’ crew, traded places with his mother in both of today’s races. Skipper Lewis Davies and John fill in some of the details of their eventful day.

“Race 5 was eventful, we started second row and tacked for clear air, rounded around 10th, but I went for a bit of a swim, missing the toe straps! But we climbed back to 7th at the finish. Race 6 was glamour, we started at the boat end and took the right side and rounded second and stayed there throughout the race. Lots of good surfing today it was really fun racing.”

The local lads move up to 5th overall, two points behind David Swan and Matt Elliot from Esperance Bay YC in WA, who had a sound day with two 5th places.

Two more races are scheduled on the penultimate day of racing to try and catch the flying Canberra team.

By Jonny Fullerton on behalf of Flying Fifteen International