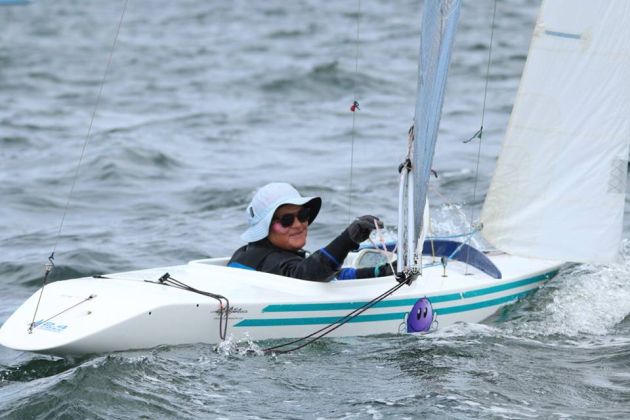 Australian Paralympic sailor Matt Bugg is sailing brilliantly on his home waters in his last major regatta before the Rio Games, holding a commanding overall lead in the Australian open championship for the International 2.4mR class.

Bugg has followed his bronze and silver medal successes at the international regattas on Melbourne’s Port Phillip last month by winning three of the first five races in the Nationals and placing second in the other two races today.

It augers well for his prospects to win his first World championship in the single-handed keelboat class which starts on Hobart’s River Derwent on Wednesday.

After five races, the Tasmanian sailor is on 7 points, with his nearest rivals, Finnish sailors Jan Forsbom and Janne Laine sharing second place overall on 15 points each.

Forsbom narrowly beat Bugg in the first race yesterday, but the Royal Yacht Club of Tasmania and Derwent Sailing Squadron picked the windshifts perfectly to win the next two races. He correctly anticipated a significant windshift to the east to clinch the final race of the day.

In fourth place is welknown paraplegic sailor from Britain, Megan Pascoe, who sailed consistently in the light to moderate south-easterly seabreezes, and is on 29 points with a score of 3-9-6-6-5.

The Finnish effort in sending a container load of the small keelboats to Australia following the 2015 Worlds in Finland is paying dividends with five of their team in the top ten after five races. Rikard Bjurstom is fifth overall and Niko Saloma sixth.

Hobart sailor Lisa Blackwood, one of the stalwarts of the 2.4mR class in Tasmania moved up to seventh overall yesterday with an 11-5-7 to be on 45 points.

The only other Australian in the top 10 is Sydney Paralympic representative Peter Thompson from Canberra who is eighth while fellow Canberra sailor Peter Russell in 11th who finished third in race three yesterday.