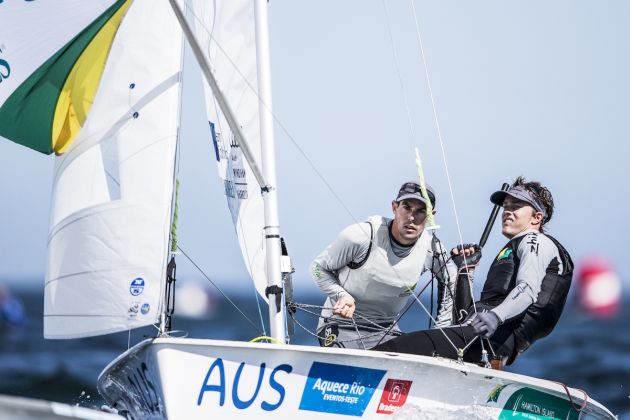 Racing at the 2016 Men’s and Women’s 470 World Championships will get underway at Club Nautico in San Isidro, Buenos Aires, Argentina from Monday, 22 February 2016 with Australian Sailing’s four-time World Champions Mat Belcher (QLD) and Will Ryan (QLD) aiming to defend their title.

When the crew won the 2015 470 World Championships in Haifa, Israel in October last year it was an historic, record-breaking sixth successive title for Olympic gold medallist Mat Belcher and a record 18th World Championship title for Australian Sailing Team’s ‘medal maker’ head coach Victor Kovalenko, and the aim is to add another record medal at these World Champs.

While Mat Belcher and Will Ryan have already been selected to represent Australia in the Rio 2016 Olympic Games in the men’s 470 class, the women’s crew is yet to be selected. Australian Sailing Team’s Carrie Smith (WA) and Jaime Ryan (QLD) are vying for the spot and their selection over the next few months. The pair finished the 2015 World Champs in overall ninth and secured Australia a spot at the 2016 Rio Olympic Games. The top ten position at the World Championship also qualified the young duo for the Australian Sailing Team.

Current World #1 and defending World Champions Mat Belcher and Will Ryan have been a winning combination ever since getting together post the London 2012 Games and have continuously finished on the podium at every sailing regatta they have competed in, including winning four World titles since 2012.

The 470 World Championships in Buenos Aires will be the season highlight in the lead up to the 2016 Rio Olympic Games and the pair is confident after winning the lead-up event and are aiming to defend their World Champion title.

“It will be tough racing at the Worlds. It’s always hard to win a World title, let alone trying to defend one, but it’s nice to get the confidence in the warm-up event. We’ve been training pretty hard over the Australian summer and the South American Champs were important for us to ensure that we are preparing the best we can. It’s really tough conditions with all the best crews here. We’re really looking forward to starting racing again and hopefully posting a good result leading into the Games,” Mat Belcher said.

All the top crews will be racing in Argentina with the World Championship a major benchmark event on the road to Rio 2016 as Mat Belcher explained: “The French, the Croatians, the Argentinian team will be very strong. The French and the Croatians were second and third at the Olympic test event last year and the Argentinian team are the bronze medallists from the London 2012 Olympics, so we’ve got some top competitors in this fleet.

“The World and the European Championships are the main events coming into the Olympics for a team to prepare themselves and benchmark how to prepare for a quality event and to make sure that they are trying to get the best result. There is a group of at least five boats that all have a chance to win these events. And all of those five or six boats given their day, given their week can come out on top and really the top 15 have a chance to medal.”

And about the conditions he added: “It’s the same race course as we just competed on at the South American Champs, same venue and pretty much same competitors and it was a great practice for us to get the experience on the water.”

“The water here is very brown which is actually quite unusual for us, it’s very flat and there is more than one knot of current. And unfortunately there is a lot of weed at the moment, which makes racing quite complicated and difficult for us, but making sure we’re not running over anything is a good practice for the Rio Olympics, so that’s a positive out here,” Mat Belcher said laughing.

In the Women’s 470 Australian Sailing Squad’s Carrie Smith (WA) and Jaime Ryan (QLD) got back in the boat just before the 2015 World Championships after extended medical issues sidelined 2013 ISAF Youth World Champion Carrie Smith for most of last year.

The up-and-coming pair, who is coached by Australian Sailing’s Olympic gold medallist Nathan Wilmot (NSW), went on to secure the Olympic qualifying spot for Australia but are yet to be selected as a crew pending their performance over the next couple of months.

They had the chance to test the waters at the South American Championship where they finished 13th and are aware of the venue’s challenges.

“It really is quite a tricky venue. It’s really hot with shallow water, shifty winds, dirty brown water and a lot of weed, so we are glad we’ve had the time to get used to the conditions on the water. We raced at the South American Championships last week and managed to get in a few good races around the weeds and light winds, and we really got in our groove towards the end of the event to finish with the last day as our best,” Jaime Ryan said.

“There has not been much time between the last and these World Championships and our expectations are to replicate a similar result. We are still playing catch up to the international teams after a tough last year, but we know now that we can mix it up with the best and we want to do that again here. We’re still in the process of selection within our Australian Team so we are really hoping to post an Olympic-worthy result here to put us one step closer to our Rio goal.”

Also the 2016 RS:X Men’s and Women’s World Championships will take place in Eilat, Israel next week with racing scheduled from 22 – 27 February 2016.