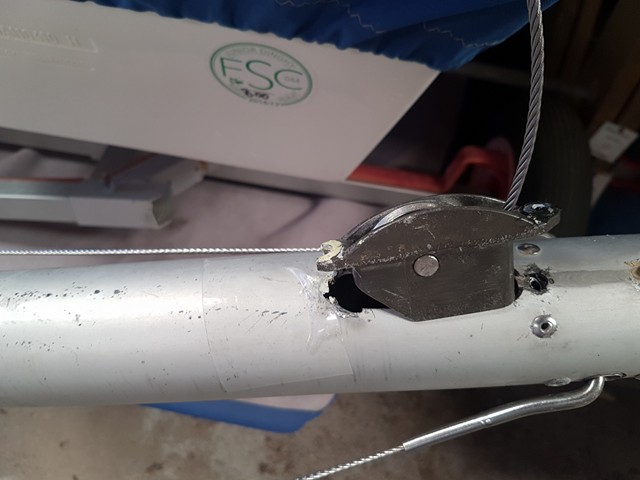 A sensational start to proceedings on day 4 of the 420 World Championships at Fremantle Sailing Club when Open division leader Chris Charlwood found that his headsail halyard turning block was damaged. When it became clear that the damage could not be repaired, a new mast was organised while the remainder of the fleet sailed off to the course area.

In an amazing piece of work, the damaged mast and fitting was removed from the boat and replaced in time for the start of Race 8, to be retrospectively measured immediately the boat returned to shore.

In the Women’s division, Nia Jerwood and Monique de Vries continued their good form with third and first placings, to hold their spot at the top of the points table, ahead of Victorians Laura Harding and Ellie Grimshaw, who finished the day with a pair of seconds. Maria and Pilar Caba from the Canary Islands and sailing under the Spanish flag, replicated yesterday’s scores of a fourth and a sixth to lie in third place overall.

The British combination of Jack Lewis and Charlie Bacon, who were confident yesterday of handling the heavier conditions, were brought back to earth today with disappointing placings of 12th and sixth, to slip to second overall in the Under 17 division.

Italians Tommaso Cilli and Bruno Mantero sailed beautifully today with a pair of seconds to maintain their spot at the top of the table. Spain’s Pol and Alex Marsans scored two fourth placings to hold down second spot ahead of their countrymen Demetrio Sposato and Gabriele Centrone. German brothers Florian and Maximilian Buscher had a disappointing race seven with a 13th placing, but a third in the next race kept their chances alive. It was their worst day of the series.

Charlwood and Dawson dropped from the top of the Open fleet into third place overall after missing race seven. That they were able to score a ninth place with an untried rig is testament to their determination. Two Spanish boats now head the open table. Carlos Balaguer and Antoni Massanet, with a third and a sixth today are now clear leaders ahead of their countrymen Albert Torres and Francisco Mulet. Frenchmen Thomas Andre and Justin Baradat share third place with the Australians.

Scores are so close in the Open division that any of the top ten boats can still win.

For today’s racing, the Open fleet was no longer split randomly, but was split according to each boat’s ranking in the qualification series of the first three days. The fleet split will continue for the remainder of the regatta.

Weather conditions were stronger than anticipated today, peaking at an average of 20 knots late in the program and gusting as high as 24 knots. Forecasters are still predicting softer pressure tomorrow, which may please some of the visitors to Fremantle.