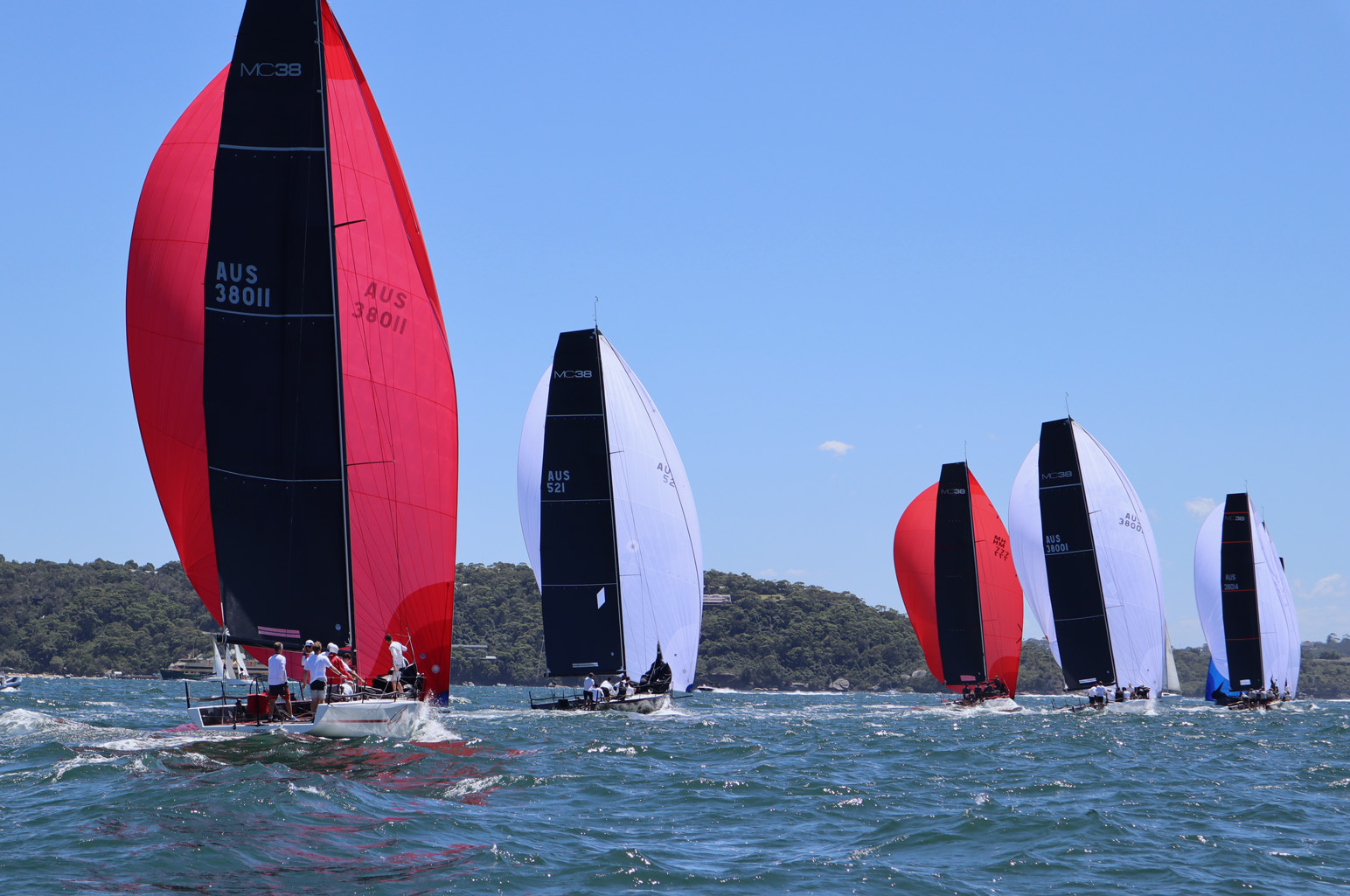 Racing got underway on Sunday February 10 on a track set by Cruising Yacht Club of Australia race management officials between Taylors Bay at Mosman and Rose Bay on the eastern side of Sydney Harbour in cool SE-ESE winds averaging 14 knots and gusting up to 20.

Maserati’s strategist Joe Turner – a straight switch with Ben Lamb who has taken up the tactician role – said: “Today was tricky with 50 degree shifts on the course. Sometimes you were in phase and sometimes not. Things are coming together again for Maserati though we still think there’s another 10% to pull out of the boat in terms of our upwind speed.”

The next time the full one design class meet will be at the MC38 2019 Australian Championship over three days, March 15 – 17, out of the Royal Prince Alfred Yacht Club. Defending boat is Steve Barlow’s Lightspeed and Maserati is looking to go one place better than last year. “We finished runner-up in 2018; it would be nice to get a championship win for Neville who has been in the class for a number of years now,” Turner added.

Shaun Lane, co-owner of the act 1 second overall placegetter Lazy Dog, declared his championship intention without a second’s hesitation: “We want to win. We’ll be doing more training with exactly the same team, and tuning up the sails a bit more. It’s great to have nine boats out… you can’t make a mistake.”

Lazy Dog is the only MC38 running Doyle sails and the owners have appointed a professional coach who, based on their act 1 form, is overseeing a feasible nationals tilt in what is only their second MC38 season. Multiple round-the-world sailor Chris Nicholson was watching from the sidelines as Lazy Dog led the day one scoresheet and eventually finished sandwiched between Maserati and Lightspeed.

Some MC38 teams will use Middle Harbour Yacht Club’s annual Sydney Harbour Regatta in early March to sharpen up prior to the national title.

There were some new familiar faces among the teams – 470 Olympic gold medallist Mat Belcher as guest tactician on Marcus Blackmore’s Hooligan and filling in for his dinghy crew Will Ryan, Noel ‘Nitro’ Drennan on main for Leslie Green’s Ginger and Rob Greenhalgh joining Ross Hennessy’s Pittwater based Ghost Rider as tactician.

A number of younger faces who were mid-week duelling at the Hardy Cup international match racing regatta out of the Royal Sydney Yacht Squadron joined bigger MC38 teams in various roles. James Hodgson and Finn Tapper, both Hardy Cup semi-finalists sailing for the CYCA, and Jess Angus from the Royal Prince Alfred Yacht Club were among the MC38 Sydney Harbour action, Angus saying “It’s proving to be really competitive with nine boats – now you have to be happy with a fourth. There’s a lot of talent in the class,” Hooligan’s offside trimmer for the past year added.

There were hits and misses. Steven Proud’s latest addition to the fleet in Swish (was Vino), with Farr 40 owner Tom Quick helming and Billy Sykes on tactics, initially retired from race 5 then the day with backstay damage. Chris Way’s Easy Tiger crew suffered a spinnaker drop failure in the final race 6, the entire kite dragging underwater next to the boat but able to be retrieved and a result posted.

CYCA race officer Steve Kidson described Saturday’s conditions as particularly challenging given the breeze direction of east then nor’east and two ships on anchor, one off Shark Island which interfered with setting a course. Prior to that the fleet was held ashore for an hour under postponement and again on the harbour. Three races were completed until dark clouds hovering over the Harbour Bridge pulled the nor’easter around and sent the fleet ashore, one race shy of the day’s original schedule.