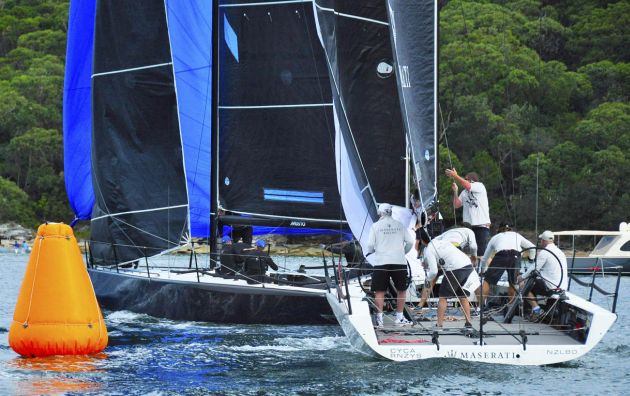 At the end of another tricky warm day on Sydney Harbour, Neville Crichton’s Maserati took the checkered flag at the boat’s first regatta back with the MC38 one design class, narrowly beating the polished teamwork of Leslie Green’s Ginger on a countback.

After six one-lap races over two days the top two boats ended up on the same score. So did the rest of the placings, John Bacon’s Dark Star taking the last of the podium spots from Howard Spencer’s Menace and Robin Crawford’s Assassin, all three with 20 points apiece.

Crichton’s welcome return and injection of passion into the class after a year out, when the campaign was shelved for business reasons, looks set to mix up the usual top tier.

“I’ve got a good team of young guys, all enthusiastic and the results came, though we were a bit lucky today,” Crichton said post racing. “It was a close regatta; the wind was tricky again today. We knew we had some problems on the first day though we thought we sailed well. For some of the crew it was their first time on one of these boats, and for all our first time as a new team. They did a bloody good job.”

See Maserati’s crew recover from a poor spinnaker hoist when leading at the top mark in race 5 – a race they went on to win https://youtu.be/5OiPTicX4DE.

An hour and a half long postponement due to lack of wind came to an end when a light nor’westerly breeze steadily filled in under increasing cloud cover. By that stage crews were antsy and brought a general recall on themselves. Races 4 and 5 played out on the North Harbour Manly Course in 6-8 knot NW-N, the MC38s dealing with the usual harbour comings and goings of large ferries and HarbourCats.

When the CYCA Winter Series fleet arrived in numbers, Middle Harbour Yacht Club’s PRO Phil Yeomans opted to move everyone to the area known as The Sound and re-start the fleet off South Head for their third and final race.

With three more one-lap sprints making up the series there was again little time to find redemption. Menace realised this all too well in races 4 and 5, pinged twice by the chief umpire on the line which meant a penalty turn and a backseat ride for the first of two legs, a handicap too big for their incredible boat speed to overcome.

“The races were only 15-20 minutes and if you didn’t get the top mark first you could forget about it,” Green added.  Though he was disappointed Ginger finished runner up on a countback he’s delighted Neville’s “back in the game”.

Ginger’s tactician David Chapman agreed, “We are disappointed with not winning but we are happy to be leading the overall pointscore.”

Menace’s story from yesterday was their fearless Kiwi leader Howard Spencer “sending in to the heads too close and we kissed AUSTRALIA. She's been slipped and patched up and we live to fight another day,” the crew posted. “Today we had a shocker… gotta have the odd bad one to enjoy the good ones.”

The MC38 Autumn Regatta is the second of a three-part Season Championship to be decided at the third and final event, the MC38 Winter Regatta in June.