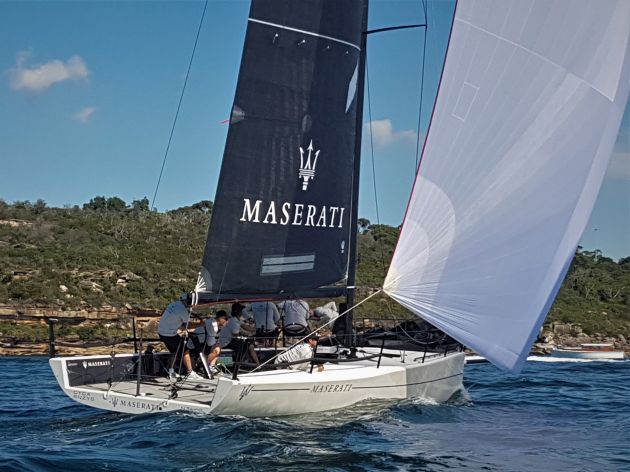 Neville Crichton’s Maserati put in a fine performance in light easterly winds on Sydney Harbour on Sunday April 23, playing the points game to mess up Leslie Green’s chances of collecting yet another MC38 class win with Ginger.

As the pair duelled, Marcus Blackmore’s Hooligan from the Royal Prince Alfred Yacht Club staged a monumental turnaround from Saturday to be the North Sails boat of the day and second overall at the MHYC Autumn Regatta, the final event of the MC38’s 2016-17 Summer Series.

Maserati, driven by guest helmsman Chris Way and racing for the Cruising Yacht Club of Australia, and Green’s team went into the final race tied on 15 points and by the first top mark Ginger had the advantage. The eyes of tacticians Joe Turner (Maserati) and David Chapman (Ginger) were boring into each other until Maserati took a gamble and split off left and wide on the final upwind work, coming into the top mark ahead of their nemesis.

And from there, what had seemed the story of the day was rewritten.

“It was a privilege to sail for Neville; I’m glad he lent his boat,” said Way of his first regatta driving an MC38 while in the final stages of finalising the purchase of his own. “These guys are all over it… a fantastic crew,” he added, casting his eyes over the grinning Maserati team enjoying a well-deserved beer at the host Middle Harbour Yacht Club in the warm autumn sunshine.

“The concentration level was pretty heavy out there. We had to play the points today. Neville’s boat is tickled up; I’ve got a lot to do to mine and now I’ve got some good ideas and a feel for it. I’m looking forward to my boat – there’s only one way to go from here!” the seasoned Way said on winning his maiden regatta in a brand new class by one point.

Hooligan earned the consolation prize, Chris Links as tactician and the talents of Michael Dunstan and Paul Westlake from North Sails combining with the rest of the experienced crew to produce a brilliant 2,1,2 scoresheet.

Climbing from last on the pointscore after day one to boat of the day Links says was due to “time on the boat”.  “We worked out the one percenters we weren’t doing right; getting off the start line and keeping the boat moving.

“The hardest part was downwind, as far being the first boat to gybe away – you were damned if you did and damned if you didn’t. Upwind we were powered up all day. Having Mikey and Flipper (Paul) with their heads out of the boat helped us get the modes right. Saturday we were just sailing hot downwind and losing places whereas today we were able to go with everyone,” Links added.

Ginger (CYCA) finished third to Hooligan on a countback and fourth and fifth, Steve Barlow’s Lightspeed and Chris Hancock’s Vino helmed by Steve Coates, were also ranked by countback, just three points off a podium finish.

Light winds made the weekend series tough for race officer Ted Anderson and his MHYC team. A morning glass-out kept crews ashore under postponement then race five on The Sound was shortened and race six re-jigged midway through. “I’m surprised we got all the races in,” Anderson admitted. “It was a very pleasant weekend… tough, particularly Saturday, but they managed.”

Dates for the remaining regattas are: