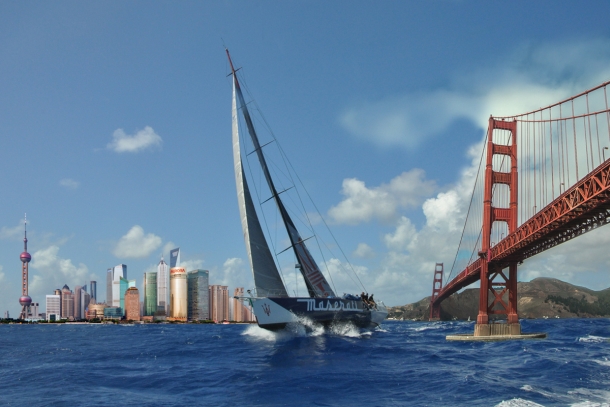 21 days, 19 hours, 32 minutes and 54 seconds: that was the exceptional time it took Maserati to cover the Tea Clipper Trade Route; 7000 miles sailed by Soldini and his crew between San Francisco and Shanghai.

“We are extremely satisfied,” declared Soldini just after crossing the finish-line in Shanghai on June 1st at 5.25 local time (31st May, 23:25 CET). “We achieved an excellent new time reference, which will be difficult to beat; we hope that these 7,000 miles will in future become a classic record, like the New York-San Francisco.”

This was the enthusiastic declaration by Giovanni Soldini immediately after completing the endeavour together with his crew, aboard  the reliable Maserati VOR70, that casted off from San Francisco at 1:52:50 GMT (3:52:50 CET) on the night of May 10 and then sprinted 7,392 real nautical miles at an average speed of 14,1 knots.

“As always, Maserati proved what an excellent craft she is and the crew made an efficient and very tight-knit team. 21 days from San Francisco to Shanghai is a very impressive time and we will be requesting certification from the World Sailing Speed Record Council. Conditions were good almost the entire way and the first part of the route was very fast: it took us only six days to reach Hawaii. Then we had a good old gallop through the Trade Winds. The final section, as we neared China, was the trickiest as winds were light, but we were expecting that.”

The Maserati VOR70’s next event is in Australia where, in late December, she’ll take part in the Rolex Sydney Hobart Yacht Race, one of the world’s most famous and challenging regattas.