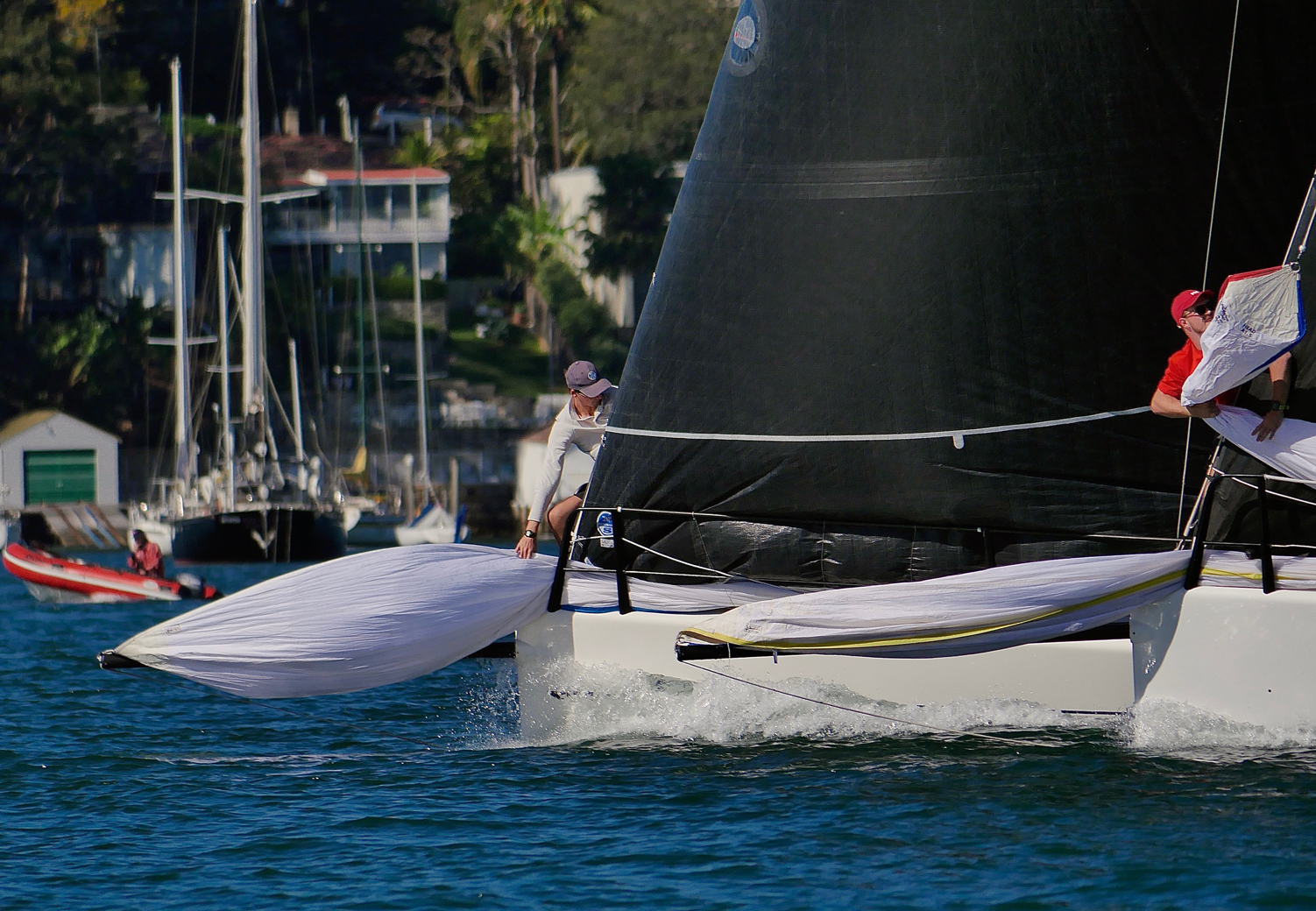 “You’ve got to have a bit of luck on your side on Pittwater; that’s the nature of sailing up here in winter,” said Maserati’s tactician Joe Turner, adding, “It helps build the skills for sailing in light and patchy stuff. I enjoy it.”

Chris Hancock’s Vino crew went into the final race a point ahead in the combined scores and needing the bullet. They finished second to Maserati, unable to hold off the Turner brothers, Daniel on the wheel and older brother Joe calling tactics with America’s Cup sailor and former Etchells world champion Ben Lamb adding his flair on a tricky Pittwater day.

Interview with Joe and Daniel Turner

After many years of class racing, a countback to second is the closest the Vino crew, spearheaded by the owner and tactician Billy Merrington, has been to claiming the overall regatta trophy. Hancock is encouraged by the result, though his plan is to sell his MC38 and downsize to three crew campaigning a 5.5m class boat with sentimental value he’s purchased.

“The crew work was really good this weekend; we’ve sailed well for quite a while, but the odd mistake counted us out,” Hancock once shared back at the RPAYC dock on Sunday May 6, 2018. “We showed what we can really do once you are mistake-free. I’m really proud of the way the guys worked.

“The eight-up has really helped us. The maximum crew weight is now 670 up from 600kgs and we’ve taken advantage of that. The two RPAYC Youth Development women, Rachel Bower and Hannah Lanz, who we’ve added most recently, are fantastic and really showing their Elliott skills. They are also a calming influence on everybody.

“Vino’s on the market. I’ve bought a 5.5m which was built in 1979 at the RPAYC and won a world championship in 1980 in the Bahamas. The move allows me to become a destination sailor and get on the water more often, and with a touch of luck the worlds will be in Sydney in 2020.”

Showing noticeable improvement in only their second hit-out with the Grand Prix one design fleet was Shaun Lane and Quentin Hewitt’s Middle Harbour based Lazy Dog, which in the wind lottery went from well back in the pack to second in race five. In that finish, one second separated each of the top three finishers.

Sunday’s three races in warm autumn sunshine and light winds capped off the six-race series run by the Royal Prince Alfred Yacht Club. The race management team snuck race four in early Sunday, in the last of the cool morning sou’wester, before the slow transition to a light sou’easter 5-7 knots.

The final race six was a one-lapper, a smart call by the race committee given the fluky conditions looked set to shutdown altogether.

Act 2 is scheduled for June 2-3 out of the Royal Sydney Yacht Squadron.