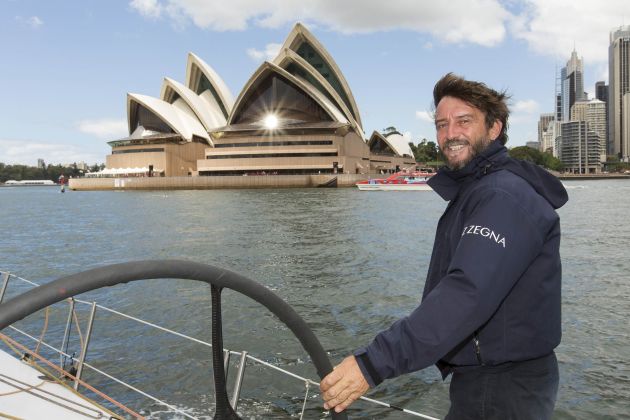 Italian yacht racer Giovanni Soldini will field his largest ever crew on board ‘Maserati’ when it starts this year’s Rolex Sydney Hobart Yacht Race on Boxing Day and the team are spending the final week before the race testing both yacht and crew to maximise the effectiveness of the new team.

“It’s the first time there have been 14 of us aboard Maserati,” explains Soldini. “This is to make up for the fact that sail stacking, i.e. moving wet sails to windward, is prohibited, and so we  need a lot of weight that can move wherever we need it to get the absolute best out of Maserati.”

Soldini and Maserati have been training in Australia for several months now, venturing forth every day into the fearsome waters of the Southern Pacific to shakedown both the boat and a larger-than-normal international crew that embraces several new members.

In the mix are long-time collaborators of the likes of Guido Broggi, Soldini’s right-hand man since the days of the Open 60  Fila and the irreplaceable “ship’s captain”, and bowmen  Corrado Rossignoli and Carlos Hernandez, fresh from the competing in the Volvo Ocean Race aboard the Spanish yacht, Mapfre.  Other regulars competing are Spaniard Oliver Herrera and English sailor Sam Goodchild who have sailed far and wide with Maserati; Pierre Casiraghi, who has clocked an impressive tally of miles on the Italian VOR 70, and Francesco Malingri, son of Franco, media man aboard Maserati and Soldini’s lifelong friend.

“It’s too early right now to know what conditions will be like for the race,” says Soldini. “But we do know that the course can be very difficult, particularly in the Bass Strait. The fronts from the Southern Ocean come in very violently, and because the water is quite shallow, create a very steep, dangerous sea. But we’re really focused on doing well, and, as ever, we’ll be fighting tooth and nail!”

Soldini knows all too well just how bad conditions can be in the Rolex Sydney Hobart Race, even though this is his first assault on the Australian yachting classic

“I was not in the notorious 1998 Sydney Hobart but I sailed alone through the same storm,” Soldini explains. “I was in the 1998-99 Around Alone race and I had come to the south of Tasmania and was heading through the Tasman Sea to go around top of New Zealand when the storm hit. I sailed for more than two days with just a little storm jib to clear the storm.”

It was in the same race that Soldini performed one of the most remarkable rescues in sailing history. French sailor Isabelle Autissier capsized some 2000 nautical miles south of Chile in fierce seas and gale force winds. Soldini was nearest yacht and he sailed more than 200 nautical miles through the night to find her in 45 knot winds and 12 metre seas. Soldini managed to find the upturned yacht, despite it being dark and the yacht being two miles from where its emergency beacon said it should be. But there was no sign of the French yachtswomen. As he passed close by for the third time he threw a hammer at the yacht and Autissier, who been sheltering from the waves in hull, appeared through a hatch and the rescue was complete. And, needless to say, Soldini also went on to win the race!

‘Maserati’ is not the only VOR70 in this year’s Rolex Sydney Hobart Race and Queensland-based ‘Black Jack’ is the yacht in the race Soldini would most wish to beat to Hobart. Despite all his experience, beating ‘Black Jack’ remains a challenge because compared to ‘Maserati’, which has been almost constantly on the move around the world for the past four years, ‘Black Jack’ lives a much more pampered life and finished fifth on the line last year in its second Rolex Sydney Hobart race, following a fourth on the line in 2014.

“Black Jack is almost like an America’s Cup yacht,” says Soldini. “They have built the boat just for this race, they are from here, they know the local conditions, they only put it in the water when they are racing, they do everything just for this race and that makes them tough to beat. Our advantage? Our crew – especially if it’s a tough race!”

Given his history as a solo sailor would Soldini prefer to be on his own in this race?

“For sure I could do this race on my own but there is no class for solo sailors,” he says. “In any case as a solo sailor you still have a crew, a team, they are just not on the boat. You are never alone, you work with a big team, at least four people on duty all the time and they are so important, if they do not do the right things, you will never win.”

“The big difference is when you sail alone you have a very special relationship with the yacht, you learn to feel the boat, to know every noise, every sound like she is talking to you. You can be inside and know exactly what is happening outside from the noises, the vibrations the yacht makes. When you are with a crew, the special relationship is not there with the boat, you are working with the crew, but there is still no talking. We all know jobs so well we can sail the boat with no talking and that, too, is wonderful and what we hope this will give us the edge in the Rolex Sydney Hobart!”

The Italian yacht will be flanked by 110 others ranging in size between nine and 30 metres from no less than 28 different nations. The fleet will some of the world’s fastest maxi yachts including Comanche, the super maxi penned by VPLP-Verdier, Ragamuffin 100, Wild Oats XI and Rambler 88. The 628-nautical mile event always throws up extreme conditions but every year attracts top-level, meticulously-prepared craft that battle it out to the last to take home this much-sought trophy.