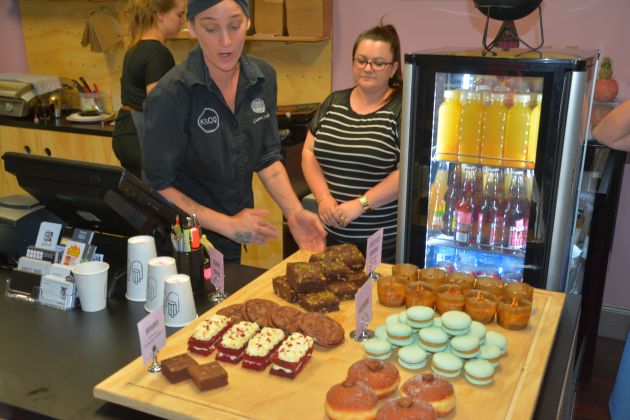 What else did you expect in the sugar capital of Australia? Photo Roger McMillan.

Like many Australians, I thought Mackay was just a mining town that was probably suffering from the end of the boom. And like many cruisers, I thought the best way to see it was over my left shoulder when heading north to the Whitsundays.

However, a trip to this magic region has changed my whole perception. Now I'm a passionate advocate for stopping off to reprovision and spend some time exploring the culinary and tourism delights of a very special place.

The Mackay Marina is a safe haven in all weather and offers haul-out and repair facilities, there are islands to explore just off the coast and the town and greater Mackay region offer a visitor many days of on-land diversions.

In actual fact, Mackay was never a mining town. At the height of the boom it was, and to a degree still is, a mining service town.

I was told it is the patent capital of Australia, with local machinery and engineering companies developing new time- and money-saving technologies for the coal miners across the mountain range in the Bowen Basin.

And yes, huge quantities of coal are still exported from the region. But the two coal-loading facilities are well south of the town and have little relevance to the cruising sailor, except for the need to pass through the ships waiting at anchor for a chance to load.

Since the end of the mining boom, the Mackay region has continued to prosper thanks to three other industries, all based on the incredibly fertile Pioneer Valley floodplains.

Australia is one of the world's major sugar producers and nowhere produces better quality sugar than Mackay. It is exported through the man-made harbour that also encloses the marina, but it's a non-toxic export that doesn't affect nearby yachts. However, it does contribute to the culinary delights.

On the other side of the port is the grain terminal, and again it has no effect on visiting yachties but makes a major contribution to the economy.

The third and very much growing industry is tourism. As well as the natural beauty of the beaches, river plain and mountain range, Mackay is home to a growing number of young people who are passionate about the local produce and who are producing mouth-watering culinary masterpieces that would have the restauranteurs of Melbourne's Lygon Street turning green with envy.

But more on that later. First the sailing.

Gateway to the Whitsundays

Heading north from Yeppoon you will have threaded your way through a myriad of offshore islands before seeing the lights of Mackay. In the past, many have chosen to keep going another 60nm to the Whitsundays, but I hope after reading this article you'll reconsider if that was your plan.

The obvious course is into the 479-berth marina which has twice won Marina of the Year awards. If you're coming in from overseas, it's an official entry port with Customs and Quarantine on site.

Built in 1999 using approximately 1,000,000 cubic metres of rock, the artifical harbour is safe in all weathers. In 2010 a Category 3 cyclone crossed the coast just north of Mackay and the only damage was a few cleats torn out and one sail that started flogging. Since then a further 18 million has been spent on making the wall even higher and stronger, so all insurance companies offer cover to boats tied up there over summer.

The marina is much more than just a place to tie up, however. Facilities include a fully-equipped haul-out area with a 65-tonne travel lift that can handle monohulls and multihulls with beams up to 9.2m.

Being inside the Great Barrier Reef and within spitting distance of the Whitsundays, environmental concerns are paramount. The shipyard has won a number of awards for it's green credentials and also offers on-site trades which can handle electrical, plumbing, rigging, painting and hull maintenance.

With costs rising in southern city haul-out areas, the marina management say they are increasingly catering to “passing trade” – cruisers who have their annual haul-out done on the way north or south.

And if you plan on leaving your boat in the north for an extended period of time, there is usually an off-season special offer, currently “pay for 13 weeks and get an extra four weeks free” and if you're hauling out, you pay for a week on the hardstand and get a second week free.

Because of the huge 6.5m tides, there are few safe anchorages near the town, which makes the marina a more than usually attractive option. But the side-by-side islands of Keswick and St Bees are just 16nm off the coast from the marina entrance and offer several anchorages. The best is probably a small bay on the north side of Keswick.

Don't anchor in the Egremont Pass between the two islands, near the airstrip. Because of the extreme tides, the current runs at four knots and when this comes up against strong winds the result is pretty unpleasant.

The other option for a day sail or overnighter (if the winds are favourable) is Refuge Bay off Scawfell Island which is further out to sea from Keswick/Bees.

Believing that a week is barely enough time to see all that the region has to offer, we asked the marina management if they would offer Cruising Helmsman readers a special deal. They responded with a “pay for five, get two extra days free” offer. You can book online at http://mackaymarina.com/marina-booking-form.html or phone (07) 4955 6855 and tell them you want the Cruising Helmsman special. (Note: This may not be available during the busy season but you can ask.)

So you have decided to stay for a week. What should you do?

The first step is to get to the Mackay Region Information Centre and grab brochures entitled 101 Things To Do In Mackay and Flavours of the World, which outlines the many dining options available in the city and surrounds.

My hosts explained that there are two types of cuisine on offer. There is “new healthy” using the amazing organic meats and vegetables grown locally, as well as local seafood. And then there is “ode to sugar” – delightfully decadent cakes and deserts that include, wait for it, crème brulee donuts at The 9th Lane Grind. But you have to queue up early in the day to get those. They sell literally hundreds of them every morning.

During my visit I was taken to a number of cafes and restaurants and was impressed with the passion and originality of the offerings.

Our first stop was the Espresso Garden, a cafe situated in a garden centre in the suburbs. I ordered my usual boring flat white and was therefore disappointed when I saw other members of the group exclaiming about drinks served in a glass and coming in either bright yellow or crimson red. They were tumeric and beetroot char respectively and I'm told they were superb.

At the Woodmans Axe, a small coffee shop near the centre of town, we were told how the proprietors are sourcing their coffee beans directly from the growers in Papua New Guinea, making them “even better than Free Trade” from a moral standpoint. The coffee is as good as any I've tasted in Sydney or Melbourne.

They also source cacao from PNG and the Solomons and make their own superb chocolate.

On the drinks front, I can recommend a visit to Goanna Brewing, a boutique brewery in the industrial area that produces a range of chemical-free beers and amazing ciders made from local fruit, and the Sarina Sugar Shed where you can try a range of distilled beverages including rum. My favourite was the mango schnapps.

And if you want a lazy breakfast at the Clarion Hotel overlooking the marina, I can recommend the pancakes.

While all the above are well worth a visit, one of the things you will definitely need to do is reprovision the yacht. For this, head to the Greater Whitsunday Farmers' Markets which are held in the centre of the city every Wednesday.

As the photographs show, there is a huge range of fruit, vegetables, meats and fish on offer and all of it is locally grown. But the one absolutely not to miss is the produce from Freckle Farm.

We visited the farm which is up near the dividing range and saw first-hand how owners Rob and Deb are using a combination of cows, pigs and chooks to manage the land and produce the best-tasting and totally chemical-free beef, pork and free-range eggs. If you like your bacon and eggs, you'll never be able to eat supermarket produce again after trying the Freckle Farm offerings.

My recommendation would be to hire a car for at least a day. Things to put on the list include a drive up the Pioneer Valley to Eungella where you can go bush walking and see platypus swimming in the stream; stop at the working sugar mill on the way back; check the Freckle Farm website and see if there is a tour scheduled; watch a sunrise and feed the local wallabies and kangaroos at Cape Hillsborough; hire bikes and cycle the Bluewater Trail around the city; visit the Botanic Gardens and the Orchid House; head south to the beautiful beaches and visit the Sugar Shack at Sarina… there really is at least a week worth of activity in this beautiful part of the world.

Now is probably the time to plan your trip north for the winter. Obviously the Whitsundays and the Great Barrier Reef are on the list of places to visit but make sure you allow some time to explore Mackay and the Pioneer Valley and taste the local cuisine on the way up or back – or both.

If you need the boat hauled out, the Mackay Marina is a great place to do just that and if you want to leave it up north for any length of time, the marina is well-sheltered and the airport is just a few minutes out of town.

Mackay is much more than a mining town. And the best way to see isn't over your left shoulder heading north – it's by stopping off and exploring one of Queensland's undiscovered gems.