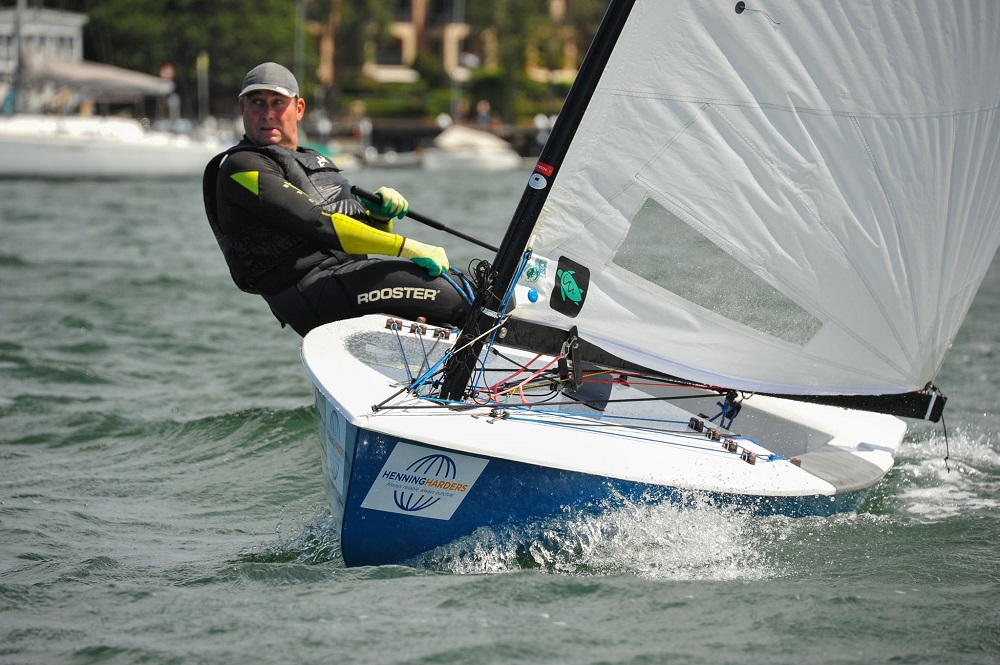 Mark Jackson has moved to the top of the standings - photo Bruce Kerridge.

You can’t keep a good man down they say – and with one day of racing remaining, defending OK Dinghy National champion Mark Jackson gained the lead at the OK Dinghy Nationals when it matters most – now holding a four-point advantage over Peter Horne, who is doing his best to win the title for Drummoyne Sailing Club, host of the Championship.

Jackson, from Black Rock Yacht Club, finished third in Race 6 and rounded off the day with a bullet in Race 7 and dropping his 12th place from Race 2 has given the Victorian the lead. Horne has moved back into contention after scoring a pair of fifth places today and dropping his Black Flag result, 37 points worth.

Twenty-third place in Race 6 let down Tim Davies, the Championship leader of the past two days.  The Wangi Wangi SC member fought back to fourth in Race 7, so is still in contention for the title, but is on equal 25 points with Brent Williams. Andre Blasse (BRYC), after winning Race 6, and Mark Skelton (WWSC) are also still very much in the picture.

Tomorrow’s race or races will be do-or-die. Most are praying that a predicted nor’ easter will funnel through to upper Sydney Harbour, which will allow two races and keep some of these competitors dreams alive.

Layback Jackson, a five-time OK Dinghy National champion, including winning the last four in succession said, “It’s exciting going into tomorrow – it’s all to play for – it should be fun.”

The Victorian positioned himself at his favoured pin end of the Race 6 start line after a General Recall and subsequent Black Flag, “Only because there was a bit more room.”

Jackson chased the top two, Andre Blasse and Brent Williams around the course, and while he was quick downwind, Jackson could not keep their pace upwind.

“They just sailed away from me upwind and I finished third,” Jackson said.

Race 6 winner, Andre Blasse, picked up the story: “It was nice sailing. Easterly, up to 15 knots, but 10 knots on the first two reaches. I started at the pin, Brent (Williams) started at the boat. The tide was running out, it was hard having to sit back – but there was a Black Flag.

“Everyone tends to sail close to Cockatoo Island, but Brent and I sailed away and crossed tacks halfway up the beat and went around the mark a boat length apart.

Blasse, the 2009 National champion, did well on the reach and took it from there, playing the puffs and shifts to beat both Adelaide SC’s Brent Williams and Jackson over the line. Next came Edward O’Donnell (WWSC), Peter Horne (DSC) and Benjamin Downey (SYC, Qld).

Victoria’s Blasse went on to finish Race 7 in seventh place and moved up into fifth overall. While winning is unrealistic, Blasse could finish in the minor placings if he has a good day tomorrow.

“First to third places can win the regatta and fourth to sixth places could grab second or third. The good thing is, everyone will have to race the fleet, you can’t afford to match race just one other boat, because the placings are so close,” Blasse commented.

Race 7 and Jackson started at the boat end of the line. “Strange for me,” he conceded. He and Blasse were at close quarters, but close to Cockatoo Island, the breeze became a little shifty, and Jackson picked up the shift with Folkert Janssen, while the others missed it.

“I got in front and was able to extend from there. The breeze was quite steady all day really, apart from a few gusts, so I was able to sail my own race,” said Jackson, who beat fellow BRYC member Janssen over the line by nearly a minute. Brent Williams was next, then Tim Davies, Peter Horne and Mark Skelton.

Top five after seven races and one drop:

Racing concludes tomorrow, with the prize giving to follow at Drummoyne Sailing Club in the evening.