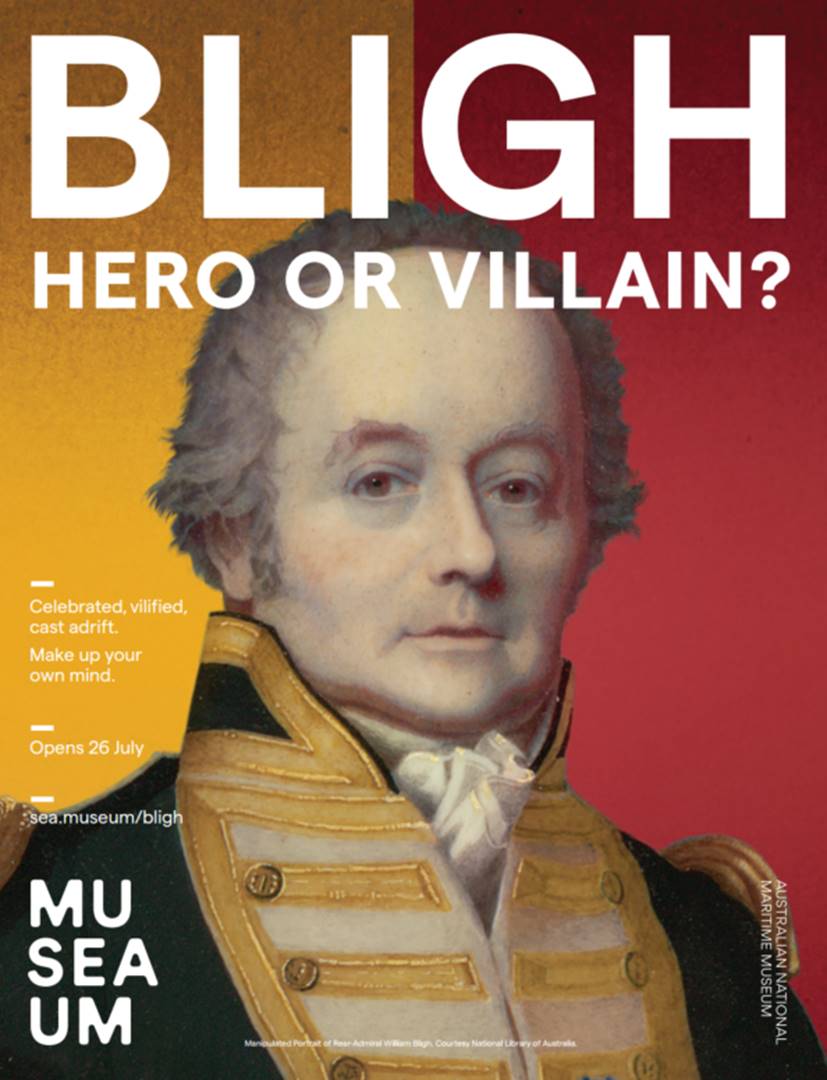 The Australian National Maritime Museum will open their latest exhibition Bligh – Hero or Villain? this week – the first major exhibition the Museum has created after undergoing a dramatic and stunning brand refresh.

The exhibition is a radical new take on one of Australian history’s most divisive characters. It tells two very different sides of the same story – Bligh as hero, and Bligh as villain – asking the visitor to decide by casting their vote at the end of the exhibition.

“History is generally written by one side, and usually the victors. Many historians are now attempting to rectify this by interrogating our old versions of the past in new ways,” comments Dr Stephen Gapps, Australian National Maritime Museum Curator. “It’s particularly unusual for a major museum to portray history in such a manner – to question it and present two quite different narratives in the way we have done.”

Almost universally portrayed as a villain in movies and books, does this view of William Bligh stand up to scrutiny today?

What’s not in doubt is that Bligh’s life was extraordinary – he caused controversy on land and sea. He was an officer of the Royal Navy, a survivor of a mutiny at sea, and a Governor of NSW who was overthrown in a military coup, which became known as the Rum Rebellion.

The exhibition will be open until 2 February 2020 and is included in the Big Ticket https://www.sea.museum/whats-on/exhibitions/bligh

For the first time in the Museum’s history, the general public will have an opportunity to attend the grand opening gala which has a limited number of tickets on sale.

The gala opening will feature a rum garden by Sydney’s only rum distiller Brix, live traditional Polynesian tattooing, live music by popular Sydney band The Bottlers, award-winning catering by Laissez-faire, tours with the curator, and so much more as the exhibition comes to life before guests’ eyes.

Come and judge for yourself. Preferably with a villainous (or angelic) rum cocktail in hand.

5 September will see a panel of Australia’s most extreme adventurers including author and sailor Rob Mundle OAM, world record rower Michelle Lee and world record extreme water skier Alex Luther look at Bligh and Extreme Journeys. What drives extreme adventurers to risk their lives in the pursuit of greatness, and how do current day journeyers compare with Bligh’s era of explorers?